Report and free highlights as Chelsea miss chance to make ground on West Ham and Liverpool; Emile Smith Rowe lifts Arsenal to eighth with victory after Jorginho backpass tipped into his path by Kepa Arrizabalaga

Emile Smith Rowe denied Chelsea the chance to cement their top-four status as he took advantage of Jorginho’s howler to give Arsenal a 1-0 win at Stamford Bridge.

The Blues would have all but secured their Champions League qualification with a victory which would have taken them 10 points clear of Liverpool, who have four games left to play, but after making seven changes ahead of Saturday’s FA Cup final, struggled to create clear-cut chances.

Kai Havertz should have put them ahead 10 minutes in when he intercepted Gabriel’s loose pass for Pablo Mari and raced clean through, but then fired over Bernd Leno’s bar with only his compatriot to beat. Moments later Jorginho’s equally poor back-pass was kept out by Kepa Arrizabalaga at full stretch, but Smith Rowe was on hand to bundle home after being teed up by Pierre-Emerick Aubameyang.

Man of the match: Mohamed Elneny

Chelsea were dominant for the large majority of the remaining 75 minutes without forcing Leno into any uncomfortable saves until the final minute. They did beat him through Pulisic’s close-range header from a corner, which was swiftly denied by a VAR review, before the German produced a stunning stop to tip Kurt Zouma’s header onto the crossbar, which was then rattled by Olivier Giroud’s shot on the rebound.

The Gunners now sit only a point behind their north London rivals Tottenham, who have played a game less, while Chelsea’s top-four cushion could be cut to one point if Liverpool win both of their games in hand.

Chelsea made to pay for lack of cutting edge

Arteta has enjoyed some of his best days as a manager against Chelsea and as the hosts made seven changes, with one eye on Saturday’s FA Cup final, he would have been especially eager to continue his strong record against the top six in an otherwise miserable season.

The Spaniard has employed some tactical masterclasses in those wins but their first-half success owed more to a pair of Chelsea howlers. Jorginho, facing his own goal, failed to look up and spot Arrizabalaga’s unusual position wide of his net, forcing him to palm off the line at full stretch and into the path of Aubameyang, whose square ball was scuffed home by Smith Rowe.

By then, Arsenal should have already been behind. A poor ball by Gabriel to Mari was pinched off his toe by a better-placed Havertz. That set the German clean through, but he beat both Leno and the bar.

Mason Mount’s free role troubled the visitors throughout the half but he was twice denied in his search for an equaliser, while Christian Pulisic headed over a corner from close-range as Chelsea went in at the break with their top-four spot a more pressing concern than the weekend’s final. 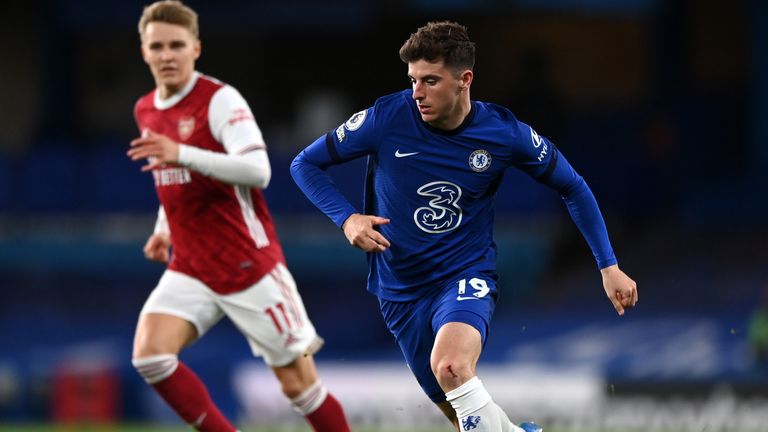 Callum Hudon-Odoi was introduced at half-time and offered Chelsea little by way of an additional cutting edge, although they briefly thought they had levelled on the hour when Pulisic nodded in from a corner, but the American knew he was offside long before VAR intervened.

If anything, with 20 minutes to go and Chelsea pressing further forward Arsenal began to look the more likely, and Martin Odegaard teed up Hector Bellerin to fire straight at Arrizabalaga before shooting over himself when well-placed.

Just as it looked like a leveller was beyond the hosts, Hudson-Odoi’s teasing low cross was fired into Leno’s body by Pulisic, who should have done better. The goalkeeper then helped preserve Arsenal’s three points with a wonderful stop to tip Zouma’s looping header onto the bar, and watched on helplessly as Giroud turned the rebound back against the woodwork and away to safety.

Chelsea head coach Thomas Tuchel told Sky Sports: “We had three days, we are on a good run, we had a good mood. The choices were not so good today from my side for the line-up so that’s on me. We were unlucky, of course. But we did everything today to lose.

“I’m not happy with my line-up. It’s easy to say afterwards. But it was too many changes, I should not have done it like this. It’s something in particular – but I will not tell you!”

Arsenal manager Mikel Arteta told Sky Sports: “I don’t know how they’re going to try from the outside but from the inside, nothing is broken.

“They’re going to put things on me that I never said, you can see the spirit of the team from the first minute. You can never doubt their efforts and how much they try.”

Chelsea are off to Wembley in the FA Cup final on Saturday, where they will face Leicester City; Kick-off at 5.15pm.

Arsenal’s penultimate game of the season is also in London, with a trip to Crystal Palace next Wednesday night; Kick-off at 7pm.