Gent defender Igor Plastun suffered one of the worst injuries a man can imagine after colliding with his own goalkeeper which required him to have stitches to his genitals during the Belgian Pro League’s season-opener against Sint-Truiden.

Plastun was having the perfect start to the 2020/21 campaign when he scored a rare goal to equalise for his side just before half-time.

But his afternoon soon took a drastic turn when he was left in agony after colliding with goalkeeper Thomas Kaminski.

The pair attempted to clear a cross in the 59th minute when they came together and the ball fell to the aptly-named Facundo Colidio to score the winner.

Plastun remained on the deck and the physio sprinted onto the field to provide treatment.

After a brief observation the centre-back realised his manhood was not as it should be. 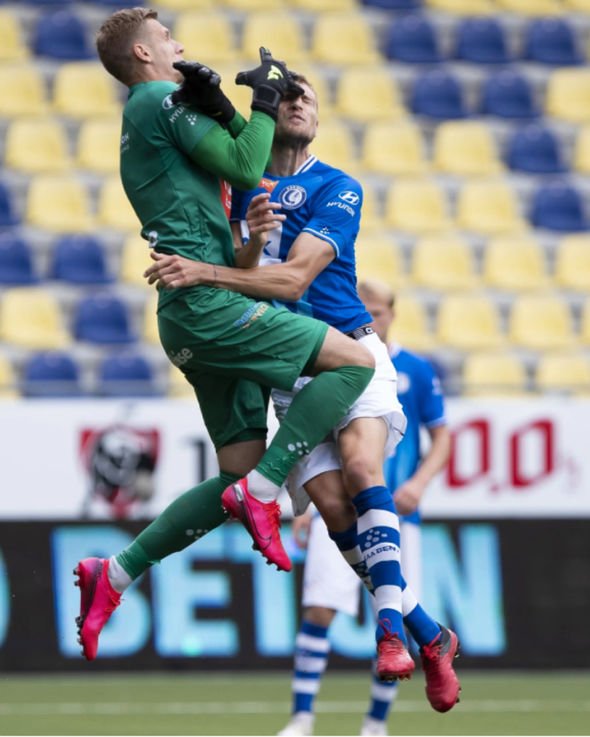 The 29-year-old had tore his penis and he required it to be stitched up at the side of the pitch.

The Ukranian will be hoping his recovery is a swift one as Gent earned a place in the Champions League third qualifying round, which is expected to take place next month.

The Belgian league was ended prematurely last season because of the coronavirus pandemic so Gent retained second position in the table.

It will not be the first time Plastun has competed on such a stage as he turned out for Ludogorets in Europe’s top competition in 2016/17.

In what was possibly one of the highlights of his career, Plastun played the full 90 minutes as the Bulgarian side held Paris Saint-Germain to a 2-2 draw in the group stages at the Parc des Princes.

Meanwhile, the Champions League returns to action tonight as the ‘Final 8’ tournament gets underway in Portugal.

Italian side Atalanta take on PSG in the opening match while RB Leipzig, who will be without top scorer Timo Werner, face Atletico Madrid tomorrow.

Manchester City, who knocked Real Madrid out of the last-16, take on Lyon, who beat Cristiano Ronaldo’s Juventus, on Saturday.