Josh Maja was the ‘bad guy’ of Netflix documentary ‘Sunderland ‘Til I Die’ as his acrimonious exit played out in front of the cameras… now the striker is back in England, so can he guide Fulham away from relegation?

His transfer saga made him one of the ‘stars’ of the second series of the Netflix documentary ‘Sunderland ‘Til I Die’. Now, Josh Maja is hoping he can hit the headlines for different reasons after completing a deadline day move to Fulham.

Under the management of Scott Parker, the striker has the chance to rejuvenate a stuttering career which had shown much promise on Wearside.

Losing the their star forward cost Sunderland promotion to the Championship in 2019. Maja scored 15 goals in 24 League One games in the first half of the season before earning a move to Bordeaux.

Life in France has not been so straightforward.

Following his acrimonious exit from the Stadium of Light, the striker has only managed 11 goals in 48 games. He’s also had three managers in two years.

But who is the player portrayed in the Netflix documentary? What went wrong at Bordeaux and is he the man to fire Fulham to Premier League survival? Sportsmail takes a look…

The striker burst on to the scene in the opening month of the 2018-2019 season, scoring in all four of Sunderland’s August fixtures. At that point, the club realised they needed to tie him to a new deal. Ironically, their problem was he kept scoring.

By January 2019, Maja had 15 goals and two assists in League One and several clubs who wanted to sign him. The interest from elsewhere meant Sunderland were looking at a bigger contract than they had previously envisaged.

Nevertheless, chairman Stewart Donald was so confident of holding on to the forward he publicly stated that Maja would sign a new deal.

Maja himself reassured supporters he would be staying in the North East, promising fans that he would still be in the city to turn on their Christmas Lights the following year. A few weeks later he was packing his bags for France. 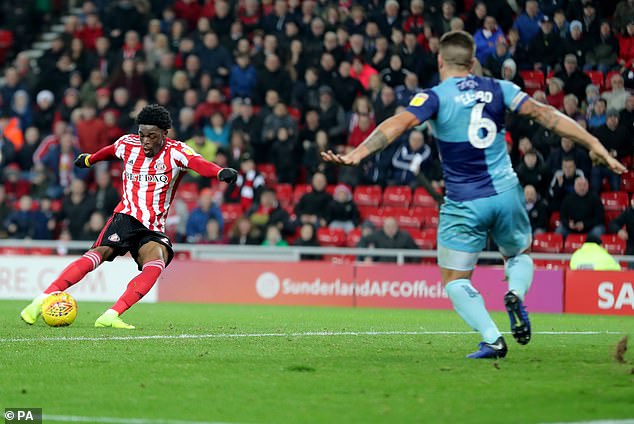 One of the most memorable moments for the documentary shows Maja being asked about his future by the film crew. The striker unconvincingly attempted to give the impression he was unaware of interest from other clubs.

Reporter: ‘So there’s a bit of transfer speculation…’

Maja: ‘Transfer speculation? About who?’

Reporter: ‘Did you not see that?’

Maja: ‘There was? Hmm. That’s interesting.’

That scene didn’t paint the best picture of Maja; however, it wasn’t the easiest of situations for a young player to be put in. The striker’s agent was also in the thick of the saga.

It was claimed by Donald that Maja’s representative was pushing for a move abroad so he could get £1million in commission. 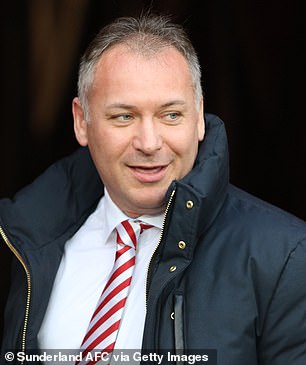 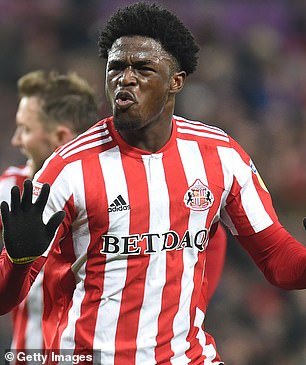 Sunderland chairman Stewart Donald (left) was left frustrated when he was unable to agree a new contract with Maja’s agent, while Maja insisted he was unaware of transfer speculation

‘I’m negotiating with Josh, it’s all moving along – and then Jack calls me,’ Donald says in the documentary.

‘He says “thanks very much – Josh has come in and picked up all his stuff and said that he’s gone. You could have told me you’d accepted an offer.”

‘I said “woah, hold on a minute. I haven’t accepted anything.”’

Sunderland were eventually forced to let Maja leave for a fee or risk losing him for nothing at the end of the season. The situation was handled badly by all parties but the documentary firmly painted Maja as the villain.

‘I always knew they were going to portray it like that, to make it look like I’m the bad guy,’ Maja told The Independent in October.

‘When I look back on my time at Sunderland, it will always be bittersweet,’ he added.

‘It was obviously a difficult decision to leave, but it was about recognising that it was time to take the next step.’ 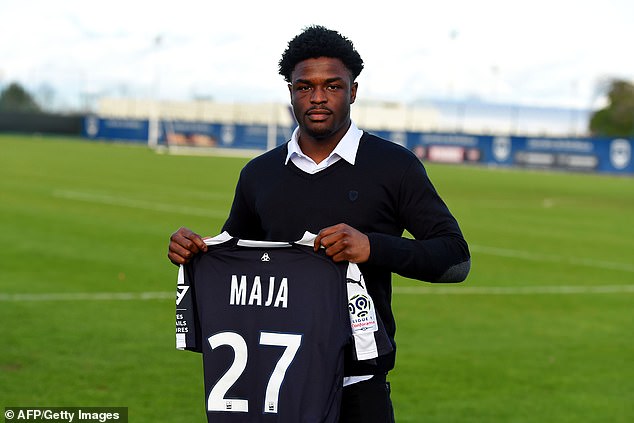 The forward left Sunderland to join Bordeaux in January 2019 for a fee of around £3.5million

That next step came in the French top flight. Maja only made seven appearances in the second half of the 2018-2019 season with four of those coming from the bench.

His second season in France was by far his best and the signs of his potential were beginning to show once again.

Before the pandemic suspended and eventually ended the Ligue 1 season, Maja was Bordeaux’s joint top scorer with eight goals in eight starts and 16 substitute appearances, contributing a goal or assist every 81 minutes.

That earned him the reputation of being a ‘super sub’ – although only one of his goals was after coming off the bench. 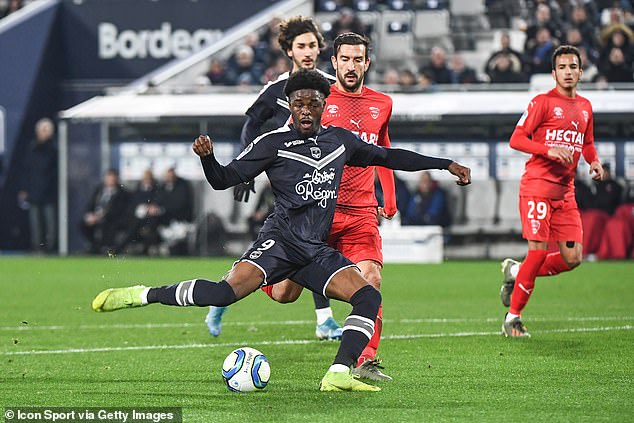 A high point was his hat-trick in a 6-0 win over struggling Nimes.

The forward was expected to be given more starts after that game but boss Paulo Sousa preferred to use him as an impact player.

New manager Jean-Louis Gasset gave Maja more game time this season with 11 starts and six more appearances from the bench. However, the striker only managed two goals – which perhaps explains Sousa’s preference of bringing him off the bench.

Fulham certainly need Maja to be an impact player if they are to avoid relegation back to the Championship.

This is Maja’s second spell at Fulham with the striker having played for the club’s academy before moving to Manchester City and then Sunderland.

Missing out on Josh King to Everton puts more pressure on Maja to find the goals needed to steer Parker’s side to safety.

Bobby Decordova-Reid is the club’s top scorer in the league with five goals. Ademola Lookman and Ivan Cavaleiro both have three while Aleksandr Mitrovic has two.

All three have also missed 14 big chances between them. Only Sheffield United have scored fewer goals than Fulham and West Brom this season and it will be hoped Maja can rediscover his form from Sunderland – albeit in two divisions higher.

There is reason to believe Maja and Parker could be a good fit. The Fulham boss has got the best out of players who haven’t quite made it in the top flight previously.

Decordova-Reid has already matched the number of goals he managed in the Premier League with Cardiff while Lookman never made the grade at Everton but has been one of the club’s best players this season. 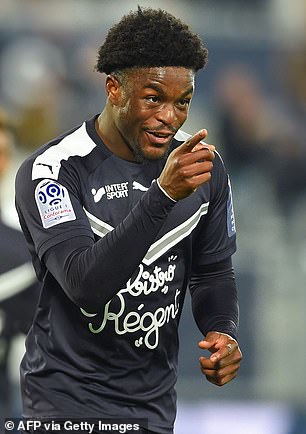 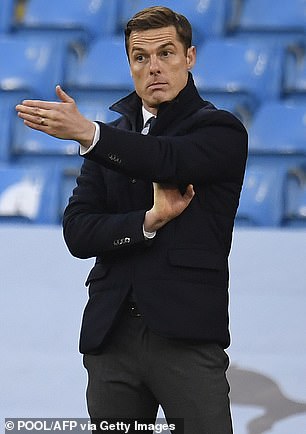 Fulham fans should also be encouraged by what his former manager had to say about Maja. What wasn’t shown in the Sunderland documentary was a scene described by Ross following the striker’s departure.

Ross said: ‘Josh was not only a tremendously talented young player but was a very humble young man.

‘That was shown by the fact he returned to the club a couple of weeks ago, left gifts, not just for myself and the coaching staff but for a lot of the people around the club, handwritten cards thanking them for the support they’ve given him and allowing him to progress his career.

‘That example of how a young man conducts himself is something people don’t often get to see.’

That is the Maja Parker will be hoping arrives at Craven Cottage this week.