A pint-sized drinker! BT Sport cut to astonishing scene of one young Bundesliga fan appearing to gulp down BEER during match in Germany

A young fan was spotted drinking a pint of beer during a match in Germany on Saturday, baffling the BT Sport Score pundits.

The little Bundesliga fan, slouched in his seat and wrapped up against the cold, appeared on screen casually sipping the drink during the game.

With the pint nearly finished, the kid – who Mark Pougatch described as ‘no more than six-years-old – lifted the cup skywards to admire his work, before going back in to finish the job. 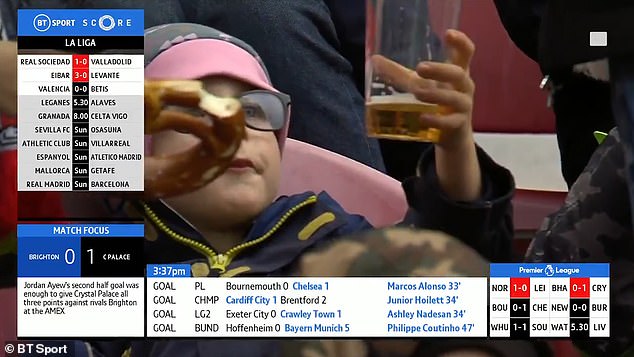 The youngster paused to check how much was left, before getting back to sipping

The BT pundits were stunned by the images, with Lars Siverstsen pointing out: ‘He’s nearly finished it! That’s the worry.’

Pougatch responded: ‘It’s bigger than (a pint). It’s a litre!’

Some on Twitter responded by suggesting the beverage was an ‘apfelschorle’ apple drink, but others disagreed because of froth in the cup. 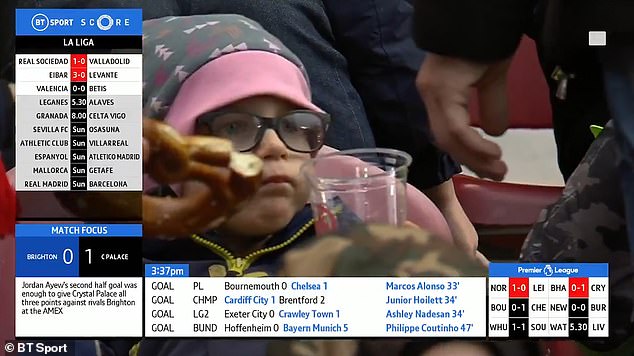 English fans are banned from drinking alcohol within sight of the pitch, and many Premier League fans watching the clip would have been left jealous of the young supporter freely chugging his pint.

One Twitter user responded: ‘Apart from the fact that this kid is drinking beer… it’s 2020, let’s enjoy a pint on the terraces.’