Melbourne City capped a season of triumph when they dominated a 10-man Sydney FC to win their first A-League grand final in front of a COVID capacity AAMI Park crowd of 15,000.

The 3-1 scoreline scarcely does justice to the control Paddy Kisnorbo’s team had in a game in which their opponents took the lead through a wonderful Kosta Barbarouses strike but were on the back foot for almost an hour after the dismissal of midfielder Luke Brattan in the 35th minute.

Andrew Nabbout celebrates with his City teammates Scott Galloway and Craig Noone at the stroke of full-time.Credit:Getty Images

By then the excellent Nathaniel Atkinson had drawn the hosts level, with captain Scott Jamieson slotting a penalty just before half-time. Scott Galloway made it three in the dying moments of injury time.

City set the tone for their power-packed performance in the very first minute, winning two corners inside 60 seconds as Kisnorbo’s side looked to stamp their authority early.

This has been the City way all season: hustle and bustle, pace and power as they establish dominance, prevent their opponents getting into a rhythm and put themselves in the driver’s seat.

The stakes might be higher in a grand final, but the high pressing, high-paced principles, imbued through the City Football Group template and adapted for local consumption, remained as they had throughout the regular season. 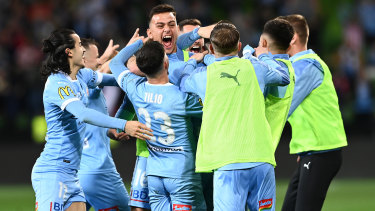 Scott Galloway of Melbourne City celebrates with his teammates after scoring their third goal during the A-League grand final.Credit:Getty Images

But there is a lot more to their game than just speed, strength and stamina.

This is a team that is comfortable in possession, tactically aware and capable of shifting the emphasis of their attacks instantaneously when required, leaving their opponents ragged and out of shape.

A drop of the shoulder from Florin Berenguer or a pinged cross field pass from Atkinson meant City were able to pull Sydney out of position and create space across midfield and in dangerous forward pockets.

It was there that the youthful duo of Marco Tilio and Stefan Colacovski ran directly at goal and challenged Sydney’s tall but rather more ponderous central defensive pairing of veteran Alex Wilkinson and Ben Warland.

They also have plenty of mental strength.

Both these teams were hit by Socceroos call-ups, but City’s absences – headed by Golden Boot winner Jamie Maclaren – were arguably more grievous.

But that hasn’t worried them in a COVID-interrupted finals series, and it didn’t worry them in this match even though they fell behind, against the run of play, in the 21st minute. 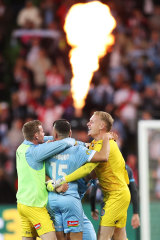 On fire… Melbourne City kick off their celebrations.Credit:Getty Images

Berenguer and Tilio had both missed good chances and Sydney had offered little until Barbarouses – a serial grand final winner with Brisbane, Melbourne Victory and Sydney – picked up the ball some way from goal and unleashed a powerful drive from well outside the City area which gave Tom Glover no chance.

But within two minutes City were level – and it was the exuberance of youth that got them there.
Colacovski took possession just inside his own half and thundered forward, his driving run taking him past Wilkinson and taking out two other defenders before he slid a pass to Atkinson.

His first touch took him wide, but he was able to fire a fierce drive past Tom Heward-Belle into the roof of the net for a deserved equaliser.

City piled on the pressure and their intensity helped create the game’s pivotal moment in the 35th minute when Brattan tried to break up a potential attack with a late challenge on Tilio.

Brattan had been booked 10 minutes earlier for a challenge on Aiden O’Neill and referee Chris Beath had little hesitation in producing a second yellow card to dismiss Sydney’s playmaker.

Sydney held out until seconds before half time, but City’s pressure paid off when the ever busy Atkinson played Adrian Luna through on the edge of the penalty area . The Uruguayan’s run was halted by a clumsy challenge from another City old boy, Anthony Caceres, and Beath pointed to the spot. 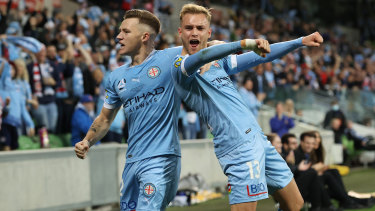 Maclaren is City’s regular penalty-taker but in his absence captain Scott Jamieson showed the leadership which has characterised his time at the club, stepping up to slam home and put his side in control.

Heward-Belle kept his team’s slender hopes alive with several excellent saves as City powered on looking – in vain – for a third sealing goal. In the end they scarcely needed it.

The players who shaped the A-League grand final

NATHANIEL ATKINSON: The Tasmanian wing back was a finals star in a losing team last year, but stepped up even more in this game, working tirelessly, creating chances and scoring a crucial equalising goal. His joy was sealed when he was named man of the match and received the Joe Marston Medal.

FLORIN BERENGUER: the languid, elegant French midfielder was involved right from the start and his close control, powerful runs from behind the strikers and adroit flicks made him a handful.

MARCO TILIO: Skillful, quick, courageous and adventurous, the young City forward – who left Sydney for more opportunities down south – tormented his old club with an eye catching array of tricks from the wing.