Thomas Muller has signed a new three-year contract at Bayern Munich to end talk of a move away.

Muller has been at the Bundesliga giants since 2008 and has put pen to paper on a new deal until June 2023.

The 30-year-old crucially kept his social distance for some very unusual announcement photos on Tuesday. 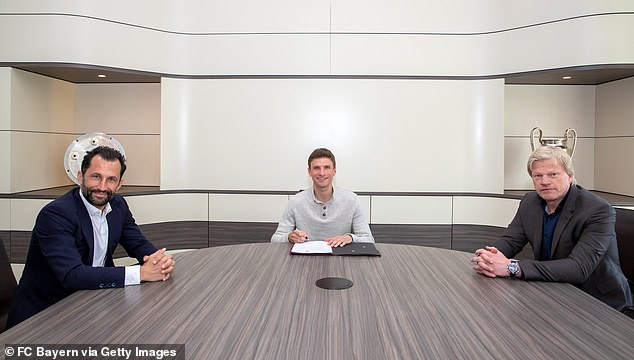 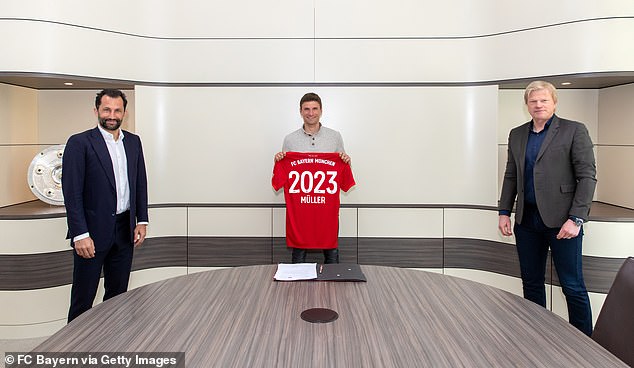 Muller posed with a Bayern Munich shirt alongside the club’s sporting director Hasan Salihamidzic and executive board member Oliver Khan. The trio kept their distance due to the coronavirus pandemic.

The forward had considered his future before Niko Kovac was sacked in November.

Muller played a bit-part role under the former Bayern boss and was on the verge of entering the final year of his deal. 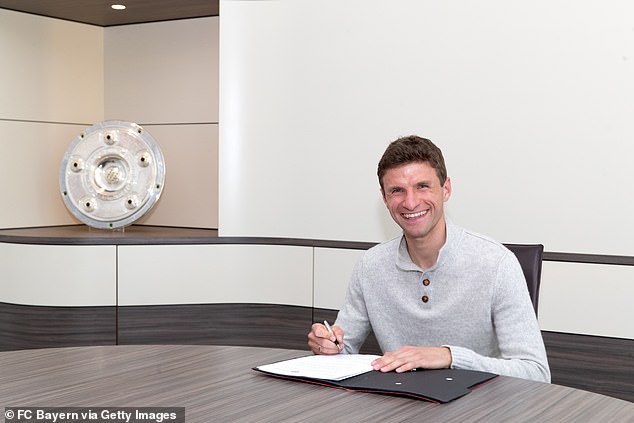 However he has been a key figure under boss Hansi Flick and has now been rewarded with a two-year contract extension.

‘Both sides signed with an absolutely good feeling. I am sure that if the ball rolls again, we will continue to be very successful,’ Muller told the club’s official website.

‘That spurs me on. For me it was number one priority to extend at Bayern – and the club saw it the same way.

‘I’m already at FC Bayern for a good two thirds of my life, so you can’t say that I accompany the club or he accompanies me – we fight for each other. 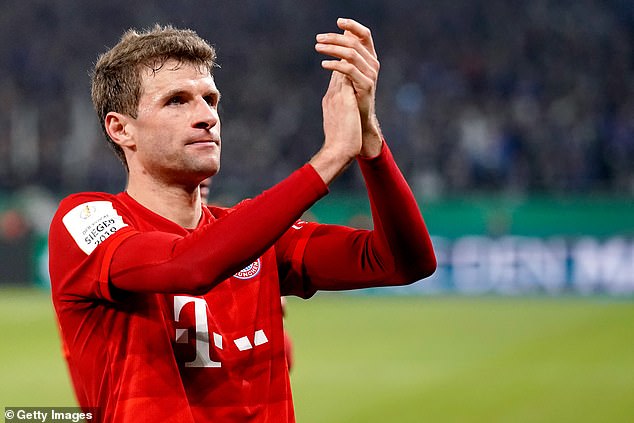 ‘For me, this association is not just any employer. It is my passion. I am happy that I will be here two years longer and will give my all on the pitch and next to it.’

Muller has won the Bundesliga title on eight occasions, the German Cup five times as well as the Champions League, UEFA Super Cup and FIFA Club World Cup with Bayern.

Salihamidzic added: ‘I am happy that we were able to agree with Thomas. For us, Thomas is a special player, an identification figure for the club and our fans, a leader who leads the field and has achieved a lot with Bayern.

‘We know what we have in him. However, Thomas also knows what he has at Bayern. It just fits, we didn’t have to have long talks and we’re all happy that things will continue like this until 2023.’