Hansi Flick has signed his new Bayern Munich contract, having agreed the deal back at the start of April.

The coronavirus pandemic has delayed him putting pen to paper on the contract that runs until 2023 but it is now official.

Bayern posted two pictures of Flick at their Sabener Strase board offices on Tuesday with the likes of Oliver Kahn and Karl-Heinz Rummenigge posing alongside him with protective facemasks on. 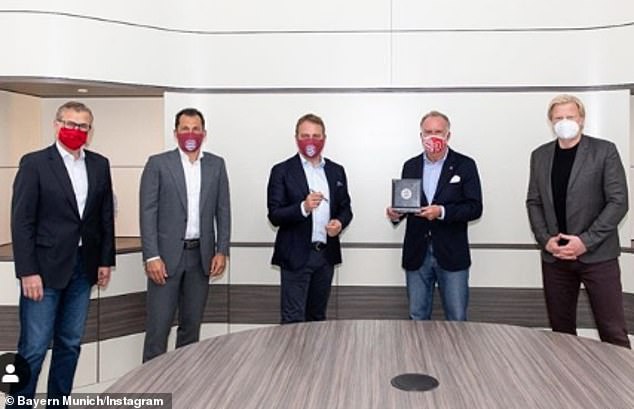 In one he is posing with a pen poised about the contract and the other he is standing in the middle of a boardroom with chairman Herbert Hainer and sporting director Hasan Salihamidzic to the left, CEO Rummenigge and executive board member Kahn on the right.

Bayern are back training again and preparing to restart the Bundesliga behind closed doors on May 9.

They will no doubt be delighted to have Flick committed given his impressive work since taking the helm as interim boss last November.

He joined the staff in July last yeas as assistant to Nico Kovac but the Croatian was sacked after a poor run of form.

Flick revitalised the side and the club have been working to put the pieces in place for their future in recent weeks.

Rising star Alphonso Davies has also signed a new deal, his until 2025, and Thomas Muller was given a contract extension until 2023. 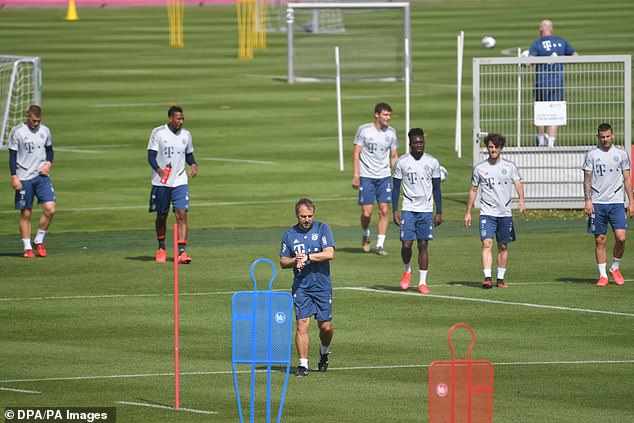 After signing his new deal, Flick told the club’s website about how he planned to marry the need to win with an entertaining brand of play.

He said: ‘When I was a player, it was all about success. You’d win 1-0 any way possible. Today, winning alone isn’t enough. I think that’s spot on. Of course, it’s about trophies in the end.

‘But I can fully identify with the fact that Bayern now has the ambition to delight its fans with more than a 1-0 win. We should always think about which player fits our mentality. This club is special.’