Tuchel quiet on Kounde but hopeful Azpilicueta stays at Chelsea

Barcelona can still strike two further blows to Chelsea’s preparations for the new Premier League season by signing Cesar Azpilicueta and Marcos Alonso from the Blues. The La Liga club have played a key part in a frustrating summer transfer window for Thomas Tuchel and new chairman Todd Boehly.

At the start of the window, Chelsea were desperate to keep out-of-contract stars Andreas Christensen and Antonio Rudiger but could not offer the duo new deals due to operating under a special licence. Barca snapped up Christensen in their first win over the Blues of the summer, while Rudiger moved to Real Madrid.

And Barca seem to have been in a battle with the West Londoners ever since. When former Leeds winger Raphinha became available for transfer, it seemed that the Brazilian might move to Stamford Bridge.

A £65million transfer was agreed, but Raphinha preferred a move to Barca and waited for the Camp Nou outfit to make a bid. That eventually came and the 25-year-old opted for Xavi’s side over Chelsea.

Recent history was soon repeated when Chelsea negotiated a £55m deal with Sevilla for long-term target Jules Kounde. The Frenchman, like Raphinha, favoured a transfer switch to Sevilla’s Spanish rivals, who finally placed a bid after being given an ultimatum.

Kounde now seems set to sign for Barca, giving Tuchel a major headache as he attempts to rebuild his defence. Kalidou Koulibaly is his only centre-back addition this summer, while Chelsea missed out on deals for former player Nathan Ake and now-Bayern Munich star Matthijs de Ligt.

Xavi could now get two more wins over Tuchel by signing Azpilicueta and Alonso. Both players have been strongly linked with moves to the Spanish giants but they have not materialised yet – potentially because Barca are struggling to register individuals amid their continued financial issues. 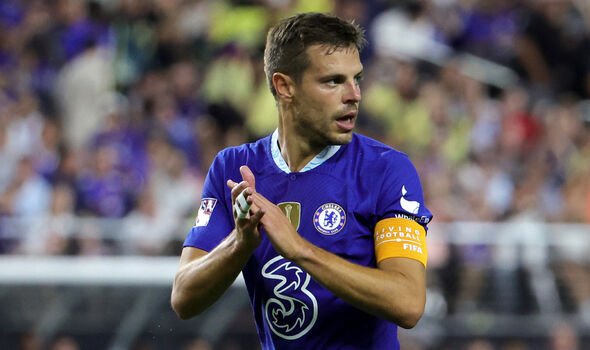 Azpilicueta activated a one-year extension deal in his contract at the end of last season but has flirted with a return to Spain. Negotiations over a move for Alonso are ‘in the final stages’, according to BILD.

Tuchel vented his frustration over Azpilicueta, Alonso and fellow wantaway star Timo Werner after Chelsea lost 4-0 to Arsenal in the early hours of Sunday morning. The German said: “[There was] a level of mental commitment that we lacked because we have a lot of players who are thinking about leaving and looking at their options. We have players that have left and I think at the moment that’s obvious.

Having signed just two players, Tuchel will hope for better success in the market over the next few weeks. Chelsea will pray that Barca are no longer an obstacle.