Barcelona 0-0 Galatasaray: Xavi’s side are held to a Europa League stalemate as on-loan goalkeeper Inaki Pena keeps out Memphis Depay, Ferran Torres and Co to deny his parent club in a goalless last-16 first leg

On nights like this you can see why Barcelona are trying to find the funds to compete with Manchester City for the signature of Erling Haaland – someone special who can do something extraordinary when a stubborn defence blocks everything thrown at it.

Inspired by on-loan Barcelona keeper Iñaki Peña Galatasaray kept Barça at bay and so Xavi’s side must reach the next round in the away second leg, as they did against Napoli.

Barcelona haven’t failed to score under Xavi since the start of December but, for only the third time since he took over, they drew a blank. The first half had started well enough for them with Ferran Torres almost finishing Jordi Alba’s cross in their first attack.

Adama Traore and Sergino Dest were doubling up on Patrick van Aanholt down Galatasaray’ left and the visitors were not being allowed anywhere near the ball.

Adama’s dribbling ability was Messi-esque at times but the final ball or shot lacked quality and as that failure to make possession pay ran through the team Barcelona were deflating like an old party balloon as the half progressed. Xavi was shuffling nervously in his technical area gesticulating the passes he wanted his playing more quickly.

Pedri livened things up dragging the ball away from Taylan Antalayi before he was brought down on the edge of the area. Memphis Depay struck the free-kick well and kept it down but Iñaki Peña kept the ball out with a fine save.

Frustration set in ten minutes before the break and Memphis was booked for a wild challenge on the edge of the Galatasaray box.

The visitors then had their best chance when Kerem Akturkoglu went past Dest cutting in from the right and evaded Frenkie de Jong before seeing his curling shot deflect just over. 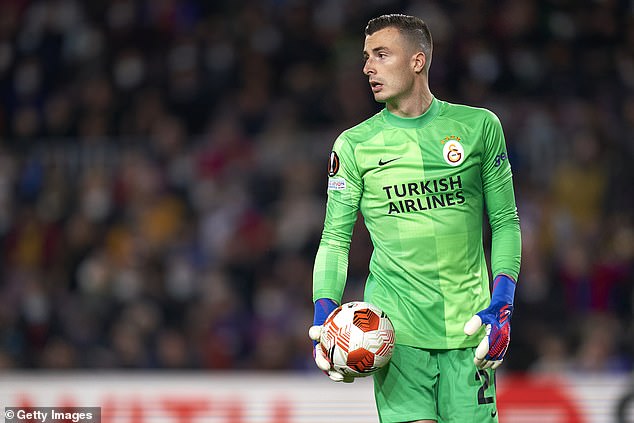 Pena, who joined Galatasaray on loan from Barca in January, made some important saves 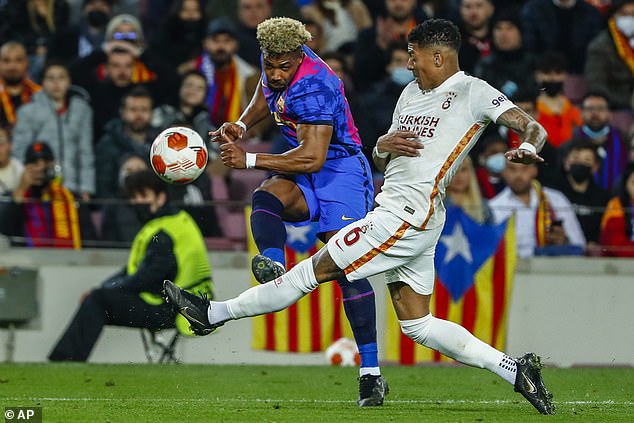 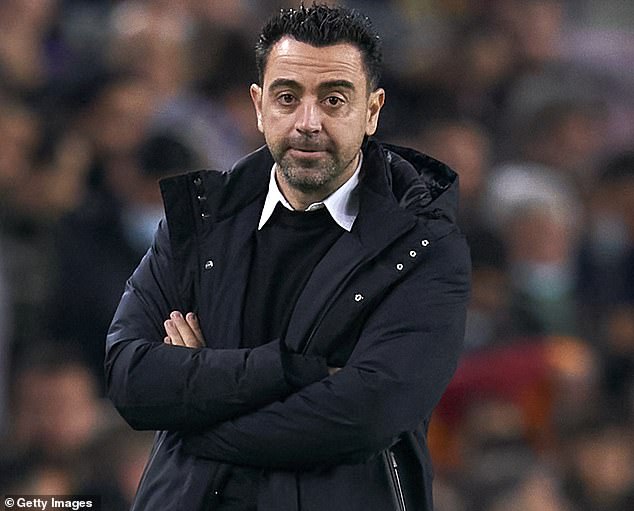 It was a frustrating night on the whole for Xavi, but it’s still all to play for in the second leg

Xavi wasn’t happy and there were three changes for the restart with Torres, Nico and Ronald Araujo all off and Dembele, Sergio Busquets and Gerard Pique on. He also sent Pierre-Emerick Aubameyang out to warm up after Memphis’ first bad pass.

Memphis then took a good corner which Busquets had tipped over by Peña. But he then blazed over with space on the edge of the area and that was his last kick as, to a huge roar, Aubameyang came on. Barcelona almost scored immediately when Alba volleyed Adama’s cross just wide.

Aubameyang then almost reached Alba’s cross after he had been sent down the left by Dembele. The French winger then rolled the ball across the edge of the area and Peña saved from De Jong’s shot. From Dembele’s next cross, floated invitingly towards the penalty spot, Aubameyang stretched but could not reach the ball with his head.

Galatasaray were holding on comfortably although Ryan Babel had to be taken off with 20 minutes left. The 35-year-old went down and Bafetimbi Gomis came on and had the ball in the net shortly afterwards. He was offside as he shot past Marc Andre ter Stegen. The linesman raised his flag as he slipped and fell. His decision, at least, was upheld.

Barcelona were still creating chances without taking them. Aubameyang unintentionally teed-up De Jong with a bicycle kick which the Dutch midfielder cannoned on to the post.

They were sloppy at the back in injury time and could even have conceded were it not for Galatasaray’s failure to punish them. They had come to defend, they had done it well and as the stadium emptied, their fans celebrated the draw like a victory. Next Thursday will decide if that’s what it was.