Aymeric Laporte has had a successful season but a different one than he is used to. He has already become a Premier League title winner for the third time in four years and scored the goal that won the Carabao Cup. Now, he is preparing for a Champions League final in the same week that he has been named in Spain’s Euro 2020 squad, having finally grown tired of waiting for Didier Deschamps to call and for a first senior cap with France.

But just as he looks forward to playing at a major tournament for the first time and regular international football at the age of 27, he is facing stiff competition for a nailed-on place at club level. Laporte has started 24 of City’s 60 games this season, despite being relatively free of injury. That is only five games more than last season, when he spent nearly six months sidelined with serious knee ligament damage.

Laporte’s long absence was the first and perhaps the most severe of the many blows that City’s title defence suffered last season and it exposed the lack of cover at centre-back after the departure of Vincent Kompany. That eventually led to the arrival of Ruben Dias, the Football Writers’ Association’s player of the year who has been hailed as the catalyst behind this season’s resurgence to top of English and – pending the result in Porto on Saturday – European football.

John Stones’ renaissance, meanwhile, has been one of the stories of the season. Since coming into Pep Guardiola’s first-choice starting line-up in the winter, Stones has built a formidable partnership with Dias that has cut Laporte’s own playing time. And when a team is performing as well as Guardiola’s currently is, it can be difficult to dislodge those who are starting every week, even for a player named in the PFA’s Team of the Year just two seasons ago.

Once considered an automatic starter, instead he is now rotated. Laporte has had to be patient, compete for a place, wait for his chances and try to take them as and when they arrive. “It’s a very different challenge because I never played less than this year,” he tells The Independent. “For me it’s very different, that is difficult to accept.”

There is only admiration for Dias’ impact and, in particular, Stones’ resurgence. “It’s good. He was not playing during the last two years but he’s come back now. I’m happy for him to enjoy his football,” Stones’ City team-mate said, but Laporte is sceptical about the idea that the added competition has helped his own game. “I didn’t get benefits because I played less,” he says, “but it’s good.”

As challenging as these spells out of the side have been, Laporte has attempted to channel that frustration into his work on the training ground and maintain momentum. “I try to train every day like normal. I try to keep my rhythm and when I have to play I try to do it as best as possible.” When an opportunity has fallen his way, he believes he has grabbed it with both hands.

“Personally, I’m happy with what I’ve done this season,” he adds, when asked to reflect on his individual campaign, that has at the very least impressed Spain head coach Luis Enrique. “When I’ve played, I’ve played really good. Of course you can always improve but I am happy with all that, and I hope I can do a very good Euro, then we’ll see what can happen.”

Laporte has been used as more of a rotation option

Laporte said similar in a pre-match interview before starting at Turf Moor in February, but couched that hint of disappointment in an insistence that he is happy at City and hoped to stay for many years. Now, when those words are put back to him, there is a suggestion things may have changed. “When you asked me that in this period I was playing more I think or maybe less but I don’t know, the situation is very different now. I will not say nothing here, it’s something personal.”

But whatever his future holds, his focus and that of everyone at City is solely on Saturday’s final. It will in all likelihood be Dias and Stones who start in the centre of defence against Chelsea at the Estadio do Dragao. Laporte’s left-footedness and versatility mean he could slot in at left-back – he lined up alongside both Stones and Dias in that game away at Burnley – but taking that place from the in-form Oleksandar Zinchenko would be cruel, while Joao Cancelo is also competing to play.

One thing in Laporte’s favour is his seniority and experience, and what he has picked up from the mistakes of City’s Champions League eliminations since his arrival. “We were not lucky,” he says of those Liverpool, Tottenham and Lyon disappointments. Laporte himself made two highly unfortunate and uncharacteristic errors in the second leg of the Spurs defeat, right in the middle of his best spell of form in a City shirt. “Obviously we’ve learned a lot about that and we’ve tried to manage these kind of games better.”

City have notably improved on their greatest Achilles heel: conceding from counter-attacks. That was the issue in the last eight against Lyon last season but has barely registered on the run to the final so far, with ties against Borussia Dortmund and Paris Saint-Germain – two of Europe’s deadliest teams in transition – safely navigated. The solution, according to Laporte, is simple.

“I think we have more of the ball, we keep it more,” he says. Guardiola was hardly encouraging a route one approach in the past but City are now much more methodical in possession, keeping the ball in order to protect it from their opponents, not only so that they can build attacks. “This is why we are not conceding that many goals. This is the one thing I think has changed.” 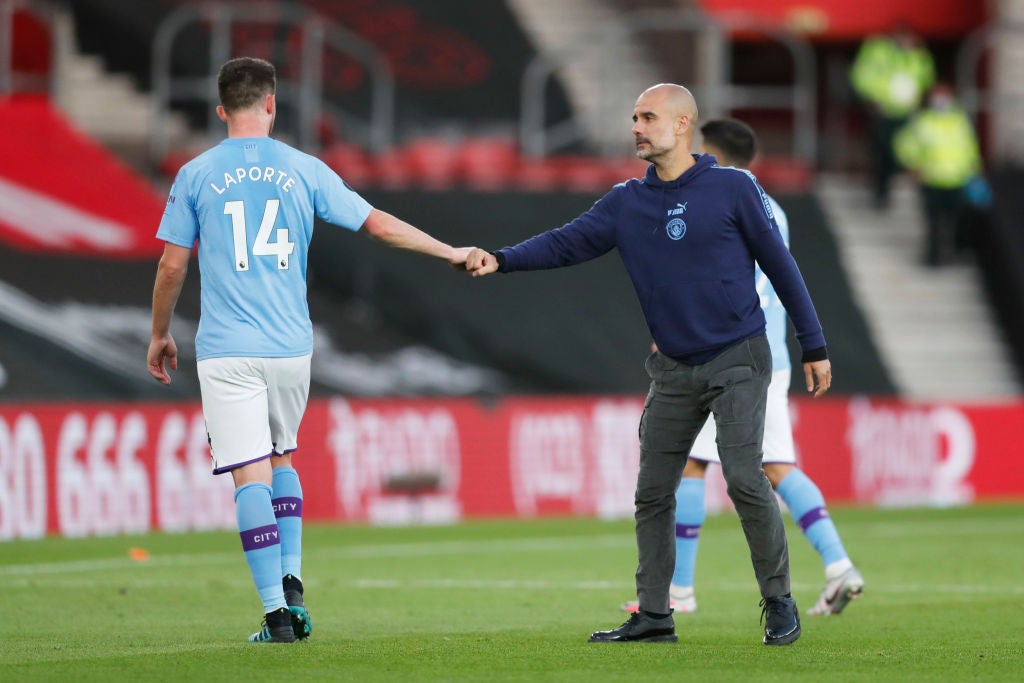 Laporte’s role has changed at City

This change in approach has given Guardiola’s side an entirely different aura. They still occasionally dazzle opponents by landing attacking combinations, but they are just as likely to stranglehold them into submission now too. It could make all the difference on Saturday and has certainly given City an air of assurance to carry into the Estadio do Dragao.

“We are confident because we have done a very good season,” Laporte adds. “We’ve already won two trophies and it’s something we like to do.” His Wembley header against Tottenham earned the first of those trophies and was the personal highlight of his personal campaign at City, his celebration was one of a player happy to have taken his moment.

What about another winning goal in a showpiece final, perhaps in Porto this weekend? “I dream with that,” he chuckles, knowingly. Laporte is aware that he might have to wait to make an impact on Saturday, and that any chance may only come from the bench, but another big moment from one of Europe’s leading centre-backs is still possible, and a season with more challenges than usual could still end in a treble.