Celtic great Bertie Auld recalls the ‘Great Battle of Britain’, when 50 years ago an incredible record crowd of 136,505 watched the Bhoys beat Leeds at Hampden Park in a thrilling European Cup semi-final

The front page of The Glasgow Herald on Thursday April 16, 1970, was split in two.

On the right-hand side, in big, bold lettering, the headline read: ‘Apollo 13 off course for the Earth.’ On the left side: ‘Hundreds at Hampden miss Celtic’s triumph.’

That was because so many turned up to watch Jock Stein’s men defeat Don Revie’s Leeds United – 136,505 to be exact – that those at the back could not see.

Bertie Auld recalls the ‘Great Battle of Britain’, when Celtic beat Leeds in the European Cup 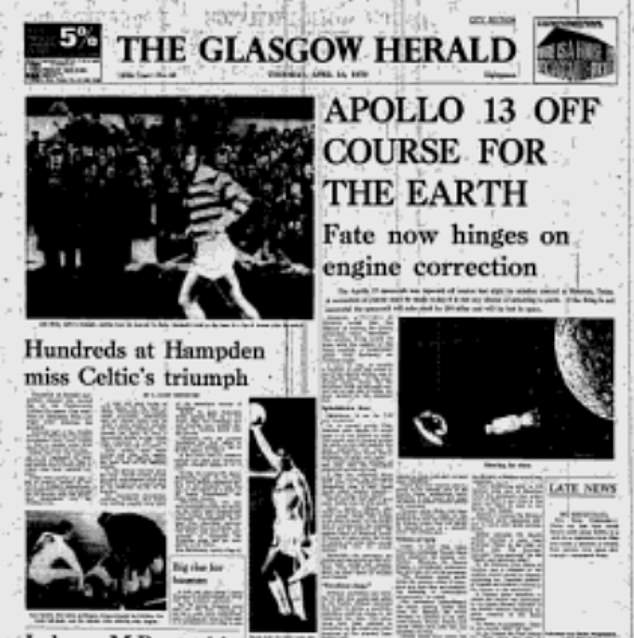 Set 50 years ago on Wednesday, it remains a record attendance for a European clash.

Billed as the ‘Great Battle of Britain’, this was the second leg of the 1970 European Cup semi-finals, held at Hampden rather than Celtic Park at Stein’s request.

Alongside their story, the Herald printed a picture of a barrel-chested topless Glaswegian on the pitch celebrating their 2-1 victory on the night, 3-1 on aggregate.

That man, also wearing a fedora hat, was Bertie Auld – the Lisbon Lion who, now 82 and residing in the market town of Strathaven, played inside left that day.

‘Jock Stein knew we had a fabulous crowd,’ Auld tells Sportsmail. ‘They appreciate, they applaud. 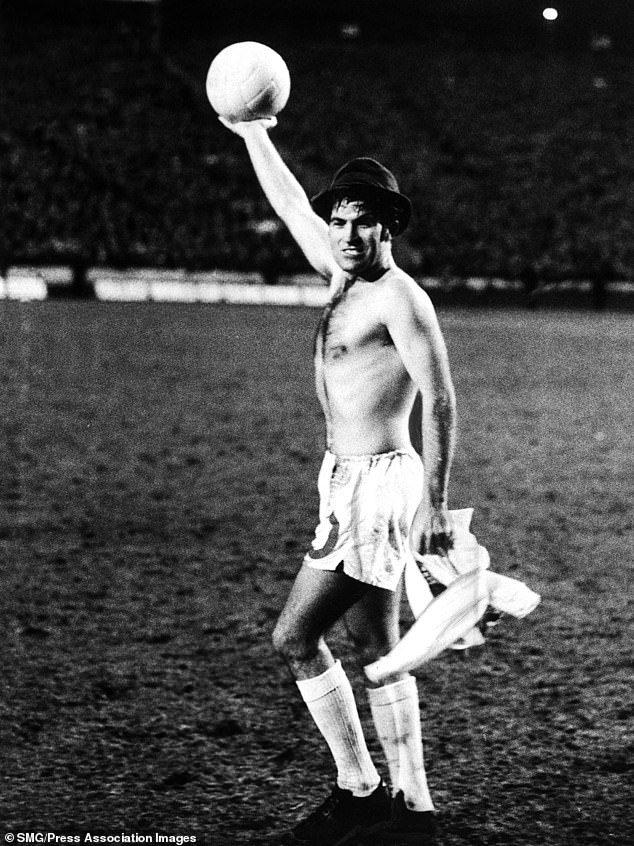 ‘All he wanted, and all he asked for, was entertainment. His team talk was that: “Entertain. You have the ability, you and your peers. Entertain.”

‘That was the type of man he was. We had goalscorers and individuals who could “turn it on”. Leeds had a great team then, too. They played classy football.

‘Your heart was pumping walking down the tunnel and you couldn’t get on to the park quick enough to get the game started. The noise, it was awesome.

‘My dad, John, was a brickie, a labourer, but he was football daft.

‘I was only 16 when I signed for Celtic and my dad, God rest him, said: “Listen son, if you can entertain, this support will never forget you.”

‘Stein and Revie, blimey, two great characters, two winners. To pull on the jersey against Leeds, I was very proud and, I must admit, I was looking forward to it.’ 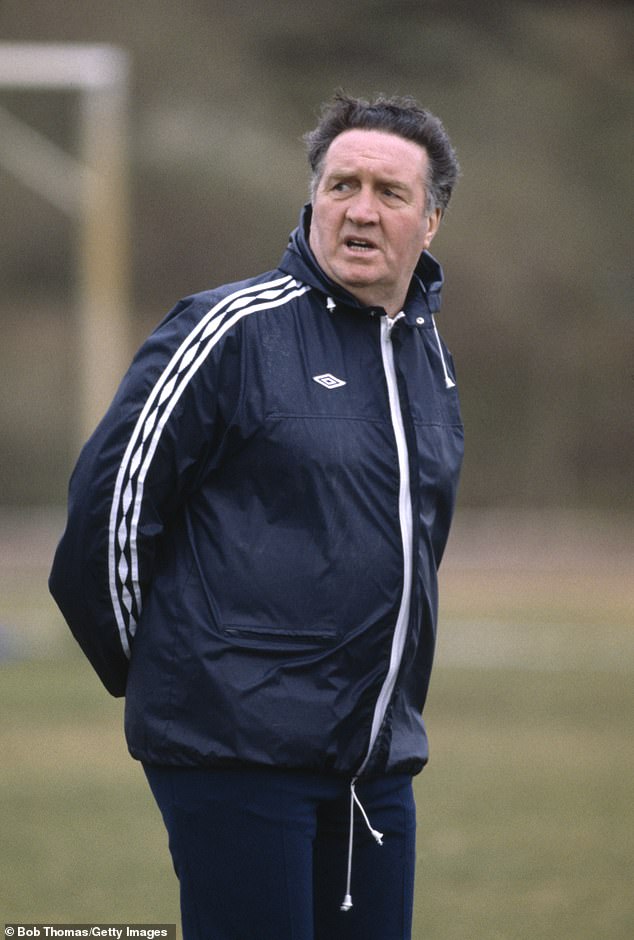 Auld suspects Stein would be sad now to see the nation being deprived of entertainment.

‘In them days, the most important thing, wasn’t money,’ Auld adds. ‘It was to entertain. And I promise you, those Celtic and Leeds teams had everything in their lockers.

‘I miss football. We have to try to look at the light at the end of the tunnel.’

Were it not for a fortunate toss of the coin, Celtic might never have met Leeds in those semi-finals.

Earlier in the competition, they drew 3-3 with Benfica after two legs.

In those days, a drawn tie did not go to penalties – but to a coin toss between captains. 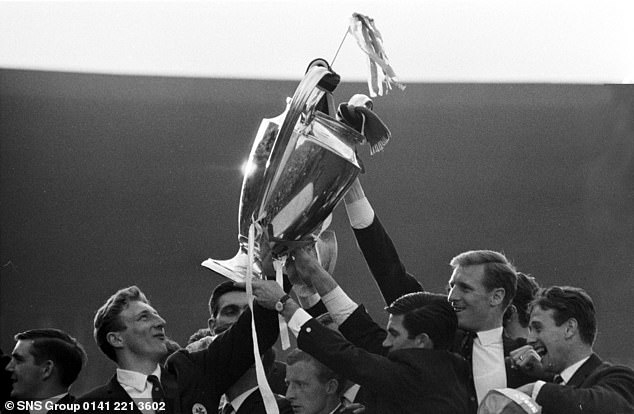 In the referee’s dressing room, McNeill asked his manager what he should say. ‘You’re on your own,’ Stein told him. The Celtic skipper called ‘Heads’ and won. Cue celebrations.

Then Laurens van Ravens, the Dutch ref, informed him that was merely to decide who could toss the coin. McNeill called ‘Heads’ again, and won for real this time.

‘You can picture the tremendous excitement in the dressing room when that happened,’ Auld recalls. ‘We didn’t know about it. Billy, our captain, God rest him, he went.

‘That was a great game, and again, we the players, all we wanted was to give everything we had and entertain. Everybody enjoyed it. That was the most important thing.’ 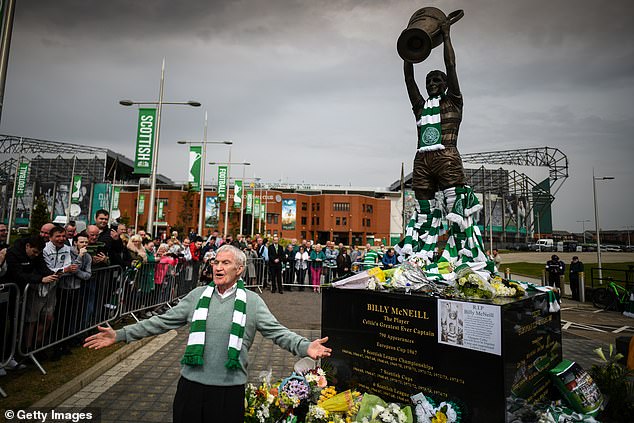 Auld, pictured paying tribute to team-mate Billy McNeil, would not change his life for anything

Auld and Co had won the European Cup in 1967. They did that by beating Inter Milan. In the tunnel before kick off, legend has it Auld started to sing a rendition of The Celtic Song.

‘I knew something had to frighten them,’ he says now. ‘Then they heard my voice!’

Regrettably, after beating Leeds to reach the 1970 final, Celtic lost 2-1 to Feyenoord.

‘I mean it when I say I wouldn’t change my life for anything in the world,’ Auld reflects.

The crew aboard Apollo 13 may have never made it to the Moon or embraced its sea of tranquility.

But had they looked out of their window towards Earth, they might have seen a sea of Scotsmen and women celebrating a momentous victory, including Auld in his fedora.