Mikel Arteta had a big decision to make ahead of Arsenal’s Europa League semi-final second leg with Villarreal.

The Gunners’ boss knew his side were in need of goals at the Emirates to have any chance of progressing to the final of the competition, something his side were unable to achieve on Thursday evening.

Arsenal were far too flat in the opening 45 minutes, with their only real chance resulting in Pierre Emerick-Aubameyang striking the post with a low shot.

The second-half brought further frustration for the hosts, who were unable to find a way past a resolute Villarreal defence. There was a sense of déjà vu as Aubameyang struck for the woodwork for a second time, but this was a night of being so close yet so far away.

A sense of urgency and drive was in short supply in the second leg and the home side can have no complaints about their exit from the competition at the hands of former manager Unai Emery.

During Arsenal’s pedestrian performance, there was Gabriel Martinelli sat on the bench.

It took until the 66th minute of the match for the Brazilian to be deployed. By this time, Arsenal already appeared down and out.

Introduced at a similar point in the match during the first leg with the Spanish side, it was no coincidence that Arteta’s side began to play with more confidence to eventually grab a crucial away goal.

But the talented 19-year-old was overlooked once again, in favour of Nicolas Pepe who offered very little on the night.

Martinelli had offered Arsenal fans a sign of things to come in last Sunday’s 2-0 league win at Newcastle United, grabbing an assist for Aubameyang at St James’ Park. 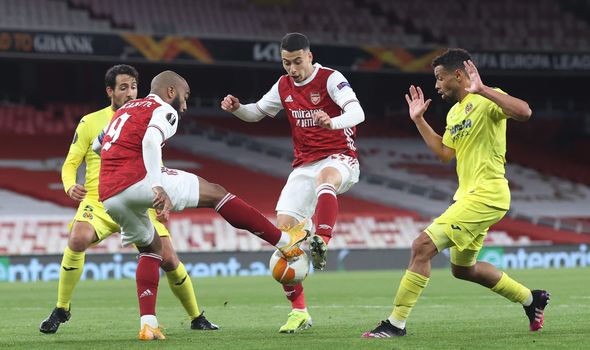 It was a performance that left Arteta pleased with the talented youngster as the Arsenal boss delivered the following verdict at the full-time whistle.

“I think they all played really well and Gabi is improving every week.

“He’s taking his minutes in the right way and he’s developing the way we all believe he can.

“Today he had an assist, which was an important moment, and he had some good moments off the left – and also trying to play as a number nine as well.”

Arsenal’s bitterly disappointing season is approaching an end and it’s expected there will be wholesale changes in the summer.

It’s time for Arteta to take a new direction with this team, with the likes of Bukayo Saka, Emile Smith-Rowe and Martinelli leading the way.

The Gunners’ boss got it wrong with his team selection on Thursday evening and, ultimately, paid the price.