Martinez – 7: Showed a cool head and distributed the ball well throughout. Was not tested often, but got down low quickly to just about keep out a Mahrez effort in the second half.

Bellerin – 5: Was guilty of poor positioning and a lack of concentration throughout the first half. Improved slightly as the match went on.

Mustafi – 5: Needlessly caught out by Sterling in the first half just yards from his own goal. Fortunate not to be booked for a reckless challenge on Silva from behind. Later tested Ederson well with a header, though.

Luiz – 8: One of his best performances in an Arsenal shirt. Set up Aubameyang well in the first half and read most of City’s attacking moves well.

Tierney – 8: Vital interception from the goalmouth kept City out in the opening moments. Fired a great ball up the wing for Aubameyang’s second goal. Looked more than motivated by the occasion.

Maitland-Niles – 6: Appeared somewhat anxious to be playing out of position. Was beaten by Walker a couple of times early on after over-committing. Deserves credit for improving over the course of the tie, however.

Ceballos – 7: Offered creativity and tenacity in the right moments.

Xhaka – 7: Put in a brave block to deny De Bruyne as the Belgium international blasted one from outside the box in the opening half. Was a strong presence for his side in the middle of the pitch.

Lacazette – 8: Did much of what you’d want from your centre-forward; held up the ball well and won fouls in various areas of the pitch. Didn’t put a foot wrong.

Aubameyang – 8: Gave Arsenal the lead with a technical finish at the back post and took his second coolly after a perfectly timed run. Elsewhere exhibited some wastefulness and indecision in key moments – that is just to say that he could have had more. 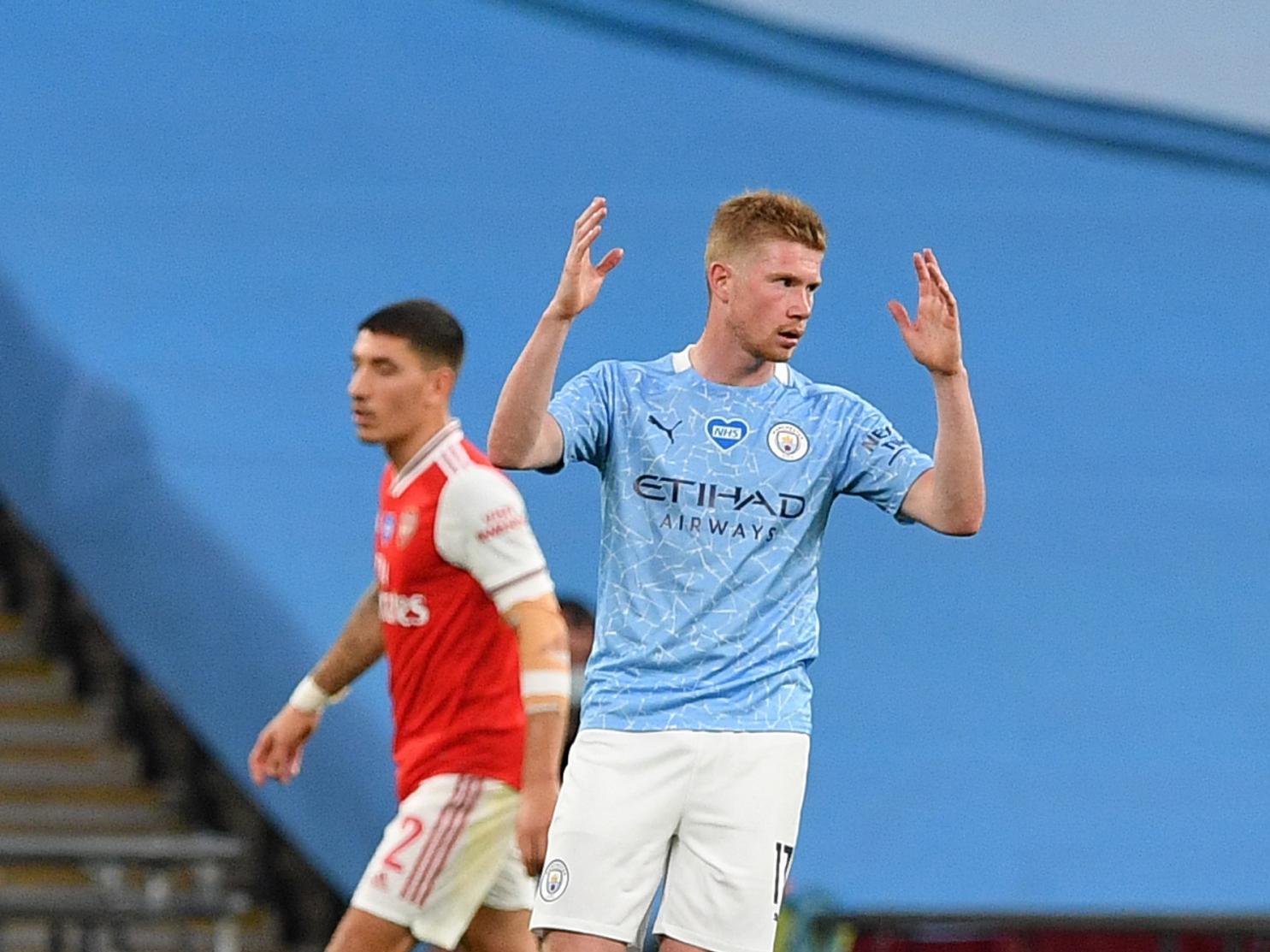 Ederson – 6: Found himself in no man’s land on the half-hour mark, but was let off the hook by Arsenal’s indecisive reaction in the City box. Made a good reflex save to tip over a Mustafi header.

Walker – 6: Gave Maitland-Niles some issues in the first half, but failed to fully take advantage of the Arsenal man’s uncertainty.

Garcia – 6: Was partially responsible for playing Aubameyang onside for the second goal of the night.

Laporte – 6: Frenchman was solid on the ball and his passing was tidy, but – like Garcia – he helped to play Aubameyang onside for the Gunners to double their lead. Hit th ebar from long-range late on.

Mendy – 6: Was one of his team’s more confident performers, but did not cover himself in glory ahead of Arsenal’s second goal.

De Bruyne – 7: Less incisive than usual as Arsenal disrupted his rhythm, but grew into the tie in the second half.

Gundogan – 5: Failed to impact the game beyond misplacing a few passes throughout the evening. Was replaced shortly after the hour mark.

Mahrez – 6: Showed off his dribbling ability early on to trouble the Arsenal defence from out right, but faded quickly. Revived himself briefly in the second half to force a great save out of Martinez.

D. Silva – 6: Desperately wanted to affect the tie, but struggled. That said, the Spaniard did little wrong; he was simply stifled by Arsenal.

Sterling – 6: Failed to capitalise on a Mustafi error after pressuring the German in the Arsenal box. Was somewhat anonymous for a while thereafter, but – like most of his team-mates – found a second wind later in the evening.

Jesus – 5: Cut a frustrated figure with little to work with.