In a match that will be remembered for errors rather than excellence, Liverpool lost 2-1 to Arsenal at the Emirates and squandered the chance to break the 100-point barrier for the season. Jurgen Klopp’s team took the lead after 20 minutes with a superbly-crafted Sadio Mane goal. The champions then self-destructed, gifting Mikel Arteta’s side two goals.

Virgil van Dijk played Alexandre Lacazette in to equalise after 32 minutes and an Alisson Becker error allowed Reiss Nelson to score the winner on the stroke of half-time. Despite dominating the rest of the game, Liverpool were unable to claw back the deficit.

Arsenal had two shots on target and were completely overrun at times. They move up to ninth place in the table and maintain their hopes of European football but they were relieved to hear the final whistle. They should consider themselves lucky.

The game took an unexpected turn but started in predictable fashion. Arsenal are notorious for defensive mistakes. They are never secure, even in the most innocuous of situations. Sloppiness is in their DNA and the game began with an illustration of this trait. Just 12 minutes had gone when Emiliano Martínez dwelt on a back pass even though Liverpool’s front three are famous for their pressing. While the goalkeeper lingered, Roberto Firmino charged him down. By the time Martínez realised and attempted to clear, the Brazilian was upon him. The ball ricocheted off the striker and clipped the outside of the post.

From that point Liverpool began to take control. The pressure built and the home side found it hard to get out of their own half. Their inability to clear their lines was exposed after 20 minutes when Martinez hammered the ball upfield and surrendered possession. Firmino advanced down the inside left channel and fed Andy Robertson. The left back went past a flatfooted David Luiz, looked up and picked out Mane, who was unattended on the edge of the six yard box. The Senegalese had the simple job of turning the ball into the net.

For a while it looked as if the champions would run away with the game but they produced a couple of defensive clangers that would have embarrassed even Arsenal. With 32 minutes gone, Fabinho rolled a short ball to Virgil van Dijk on the edge of the box while Nelson was in the Dutchman’s vicinity. Distracted by the 20-year-old’s presence, Van Dijk rolled an aimless pass back into the area, presumably aimed at Fabinho.

Lacazette was on it in a flash and Alisson had no chance as the Frenchman took full advantage to level the scores. Van Dijk claimed that he had been fouled but his complaints were unwarranted. Nelson barely made contact.

Worse was to come for Klopp’s back line. Just before half-time Alisson received possession from a thrown-in and tried to return the ball to Robertson. The pass was uncharacteristically lazy, though, and Lacazette was again quickest to react. The striker fed a pass to Nelson, whose shot gave the goalkeeper no chance of rectifying the situation. Liverpool had thrown away a position of total dominance and went in trailing at half-time. 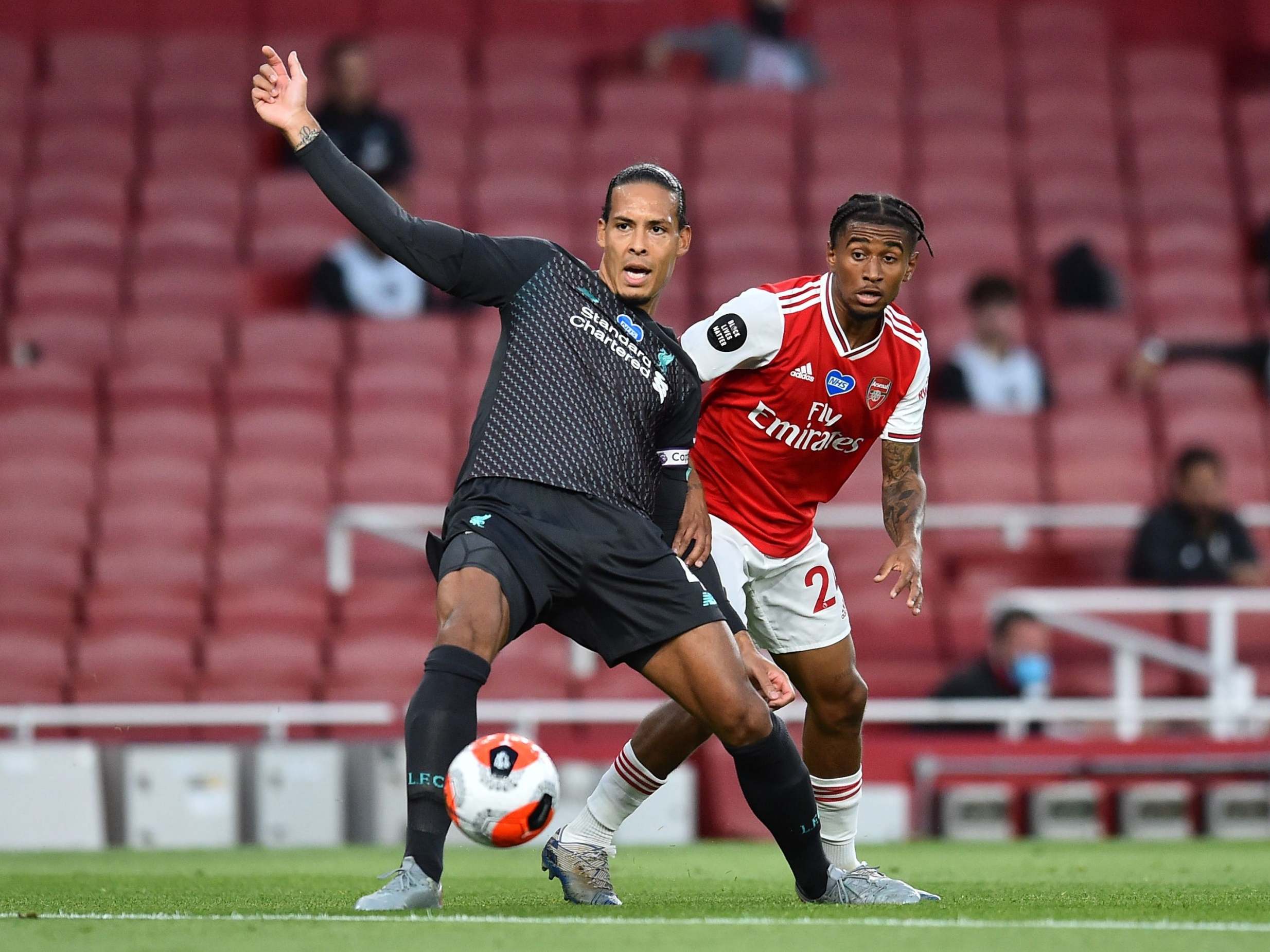 The second period settled into a familiar pattern. The visiting side passed the ball about, pinning Arsenal in their own half. They carved out a plethora of chances. Martinez’s goal survived a prolonged scramble. A Mane shot was blocked. Mo Salah produced a moment of magic in the box, digging out a cross from Trent Alexander-Arnold from under his feet with a wonderful piece of footwork that left Luiz sprawling foolishly. The Egyptian’s chipped shot just cleared the bar.

Alexander-Arnold was perhaps a little lucky to be on the pitch. His late and high tackle on Bukayo Saka earned a yellow card and the crack of boot on shinpad echoed around the stadium. On other days VAR might have intervened and turned the booking into a red.

Liverpool continued to pile forward relentlessly. Takumi Minamino, on for Firmino, screwed a shot just wide. The Japanese screamed for a penalty after tangling with Kieran Tierney but neither the referee nor VAR were interested. Salah had another splendid chance with a free header at the back post but the striker did not make proper contact and seemed surprised that the defenders had not cut out the danger.

Arsenal had no outlet ball to relieve the pressure. Every clearance came back into the danger area. But as the minutes ticked by and the opportunities were wasted, it looked like it was not Liverpool’s day. Van Dijk was unable to steer Robertson’s cross in the right direction and Mane, bearing down on goal, shot into the side-netting.

Martinez made a fingertip save from a deflected Alexander-Arnold strike in the closing seconds in a frantic finish but Arsenal hung on. It was a disappointing night for the champions.