Arsenal technical director Edu does not need to bust his gut to sign a No 10 this month because the Gunners already have the perfect player to fill that void in Emile Smith Rowe. Academy graduate Smith Rowe has started the last three Premier League matches and has played a huge role in the upturn in form for Mikel Arteta’s side.

Arsenal are linked with a host of attacking midfielders after a lack of league goals so far this season.

With Mesut Ozil frozen out by Arteta, getting a No 10 in January looked to be a priority.

Arteta wanted to sign Lyon’s Houssem Aouar last summer but the club instead chose to pursue a different type of midfielder in Thomas Partey.

Aouar remains a long-term target for Arsenal and can play a slightly deeper role than the likes of Isco, Brandt and Buendia.

And that would still leave a space for the impressive Smith Rowe to continue to flourish.

The 20-year-old spent the second-half of last season on loan at Championship side Huddersfield Town, scoring twice and assisting two in 13 starts for The Terriers.

Injury has restricted his game time this season, as he failed to make a first-team appearance until November 26.

But he made an almost immediate impact during his appearances in the Europa League.

In just three matches in Europe, including just one start, Smith Rowe scored one goal and contributed two assists.

Without a win in seven Premier League matches, Arteta was desperate to turn his side’s fortunes around ahead of the Boxing Day match at home to Chelsea.

Smith Rowe put in a fine performance at the Emirates, providing the assist for Bukayo Saka’s second goal and helping the Gunners to an invaluable three points. 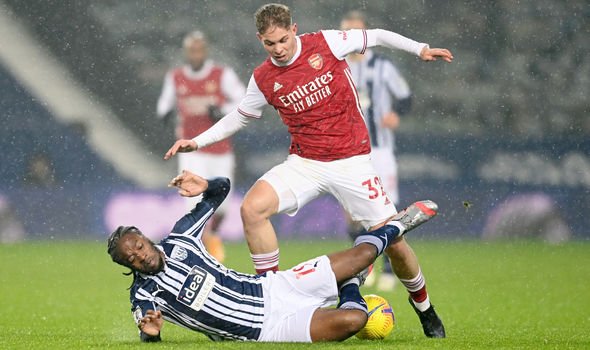 He impressed again in Tuesday’s 1-0 win at Brighton and was rewarded with another start against West Brom tonight.

Arsenal took the lead through a fine solo strike by Kieran Tierney at the Hawthorns, who cut in from the left-hand side and curled a fine shot past Baggies goalkeeper Sam Johnstone.

But the second goal from Arteta’s side was arguably even better.

Smith Rowe fed the ball into Saka’s feet, Saka laid it off to Alexandre Lacazette who expertly fed Smith Rowe who had made a fine off-the-ball run.

Smith Rowe then had the almost simple task of setting up Saka for his second goal in as many goals.

It was the type of run from a midfielder that Arsenal have been lacking and haven’t had since the departure of Aaron Ramsey.

Smith Rowe exudes confidence and provides exactly what Arteta was crying out for earlier in the campaign.

Now Arsenal just need to keep him fit and allow him to continue building the fine relationship he has with Saka especially.