Arsenal hero Charlie Nicholas believes there is a better chance of Celtic hot-shot Odsonne Edouard joining Leicester than his old club. On Sunday, Edouard gave another devastating demonstration of his quality when he scored a hat-trick against Hamilton.

It was a display which will have caught the eye of his many admirers, which include Arsenal, who could be in the market for a striker if the likes of Pierre-Emerick Aubameyang and Alexandre Lacazette leave.

Celtic have been adamant they want to keep hold of Edouard but with the transfer window open for another two months, his future is sure to come under mounting scrutiny.

Brendan Rodgers brought Edouard to Scotland before he left to manage Leicester and still has a strong relationship with the player.

The financial impact of the coronavirus pandemic means clubs may struggle to meet Celtic’s valuation of Edouard.

But Nicholas believes if Edouard makes clear he wants to leave this summer, Celtic are powerless to stop him.

“I know Edouard is still under contract but the player still holds all the power,” Nicholas said.

“If he decides he wants to leave then it will happen, that has been shown with Moussa Dembele,Virgil van Dijk and Kieran Tierney in the past.

“For Edouard to leave I do think it would take a sizeable fee, whether that is £25 or £30million. 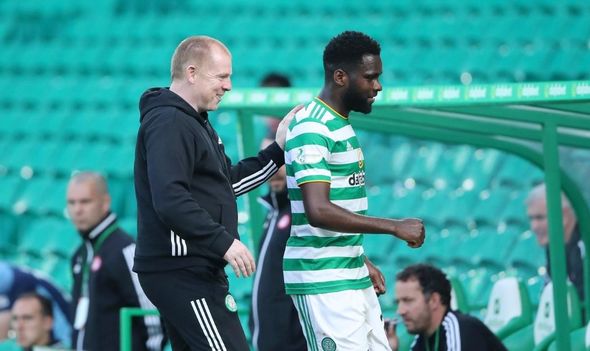 “People argue he is worth more than Tierney because he is a striker and he gets goals but the problem is that the market has changed dramatically post-Covid-19.

“I don’t see Arsenal making a move for him but I could see Everton, West Bromwich Albion, Leeds United or Leicester City making bids.

“Leicester is the one of interest because Brendan Rodgers rates him so highly and was the one who signed him for Celtic.

“He knows he can trust Edouard to play the way he wants.

“That is important because I don’t see him fitting into an Everton or a Newcastle, but he might suit a Leeds United and would also do well at Leicester.

“He has to go to a club that suits his style because he knows that when he does leave and goes to the Premier League he is probably walking into a £100,000-a-week contract.

“They have six weeks, which is a long time, to wait until the transfer window closes.

“If they can keep him then he is key to Celtic winning 10 and it is no secret that winning this league is everything to the club. If Edouard wants to leave then it will happen.”