Arsenal are set to offload Lucas Torreira this summer but for a significant loss on the money they spent on him from Sampdoria in 2018.

Arsenal are moving ahead with their plans to sell Torreira this summer despite the fact it will see them lose money.

Mikel Arteta is keen on offloading a number of players that arrived before his time in order to raise funds ahead of a major summer revamp.

After missing out on European football for the first time in 25 years, the Gunners are prepared to make wholesale changes to the squad.

And they are showing some mighty ambition by already targeting the likes of Martin Odegaard, Houssem Aouar and Ben White.

But there are several players who are being shown the exit door, too, including Torreira – who won La Liga with Atletico Madrid last season.

Despite the fact that Arteta’s side are looking light in midfield, the Uruguay international is not fancied by the Arsenal coach – who is lining up a move for Anderlecht star Albert Sambi Lokonga as a replacement.

According to Football Italia, Lazio are at an advanced stage over negotiations and look set to bring Torreira back to Serie A.

The 25-year-old signed from Sampdoria back in 2018 for £26m – which was heralded at the time after a fine World Cup appearance for his country in Russia.

However, since falling out of favour under Arteta, his value has plummeted.

It means he could leave Arsenal for less than half of what they paid just three years ago.

Lazio look set to sign Torreira on a loan with an obligation to buy, worth between £12.8m to £17m, report Football Italia. 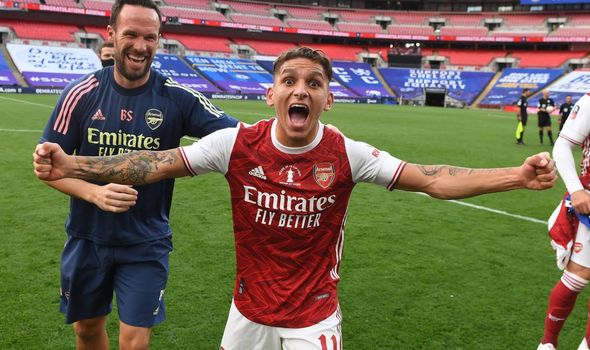 He is not the only one on the exit list at the Emirates this summer with Granit Xhaka also on his way out, with AS Roma looking set to snap the Swiss up.

Arsenal are prepared to take a hefty cut on his transfer, too, after forking out close to £40m back in 2016.

Xhaka could sign for Jose Mourinho’s side for as little as £17m while there are also question marks over William Saliba’s future with the impending arrival of Brighton star White.