Arsenal fans believe Santi Cazorla is set to return to the Emirates this summer after the Gunners posted a picture of the player alongside a cryptic message. Cazorla has admitted he wants to return to the Gunners in a possible coaching capacity in the future, however, some Arsenal fans think it could be on the cards this summer after a message was posted on the club’s official Twitter account.

Along with a picture of the club legend, Arsenal posted a short but somewhat cryptic message: “Santi. That’s it. That’s the tweet.”

However, fans were quick to respond and called for the 35-year-old to be reunited with his former team-mate, Mikel Arteta.

One said: “Bring him back already.”

While a second added: “Announce his return. That’s it. That’s the tweet.”

However, one fan wanted to only see Cazorla return as a member of Arteta’s staff, they said: “Not as a player please.”

Cazorla left Arsenal in 2018 when his contract expired and he then signed for Villarreal.

The attacking midfielder had not played for the Gunners since October 2016 after he had suffered a serious Achilles tendon injury.

Unfortunately, it marked a low-key exit for a player who had helped Arsenal win two FA Cups and had scored 29 goals and provided 45 assists in 180 appearances for the club.

Many fans took the opportunity to express how much they have missed the Spaniard playing in the red and white kit and how they would like to see him return to the north London club.

One fan said: “Ooooh Santi Cazorla, how we miss his creativity!”

While another added: “Best thing to happen at Arsenal in last decade or so, miss him badly.” 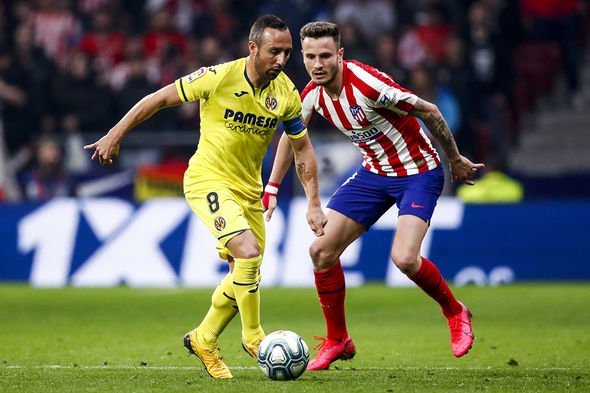 However, despite his age and injury set-backs, the playmaker has still been turning out impressive performances for Villarreal and so far this season he has scored 12 goals and provided seven assists in 29 appearances for the club.

His form this campaign saw him recalled to the Spanish national team and he had hoped to be included in the squad for Euro 2020 before the tournament was delayed for a year.

“It is a bit frustrating because I had the dream of going to the European Championship,” Cazorla said.

“I am aware that I am already 35 years old and that it is more difficult every day to be in a group as good as the Spanish team.

“It has been delayed a year and I am aware that it is much more complicated for me.

“I was enjoying it a lot and I hope to continue doing it, if the competition resumes, until the end of the season. Next year I will decide and see what my body asks of me.”

And while thinking about his future he has admitted that he would like to return to Arsenal once he retires from playing football.

“You have to ask the fans, but I want to thank everyone.

“I don’t know what I will do next, maybe a coach, maybe a sports director, but I would like to come back.”