Arsenal boss Mikel Arteta is ready to sell around six players this summer in a summer overhaul at the Emirates. The Gunners are ready for a busy summer transfer window. Arsenal could end up selling top scorer Pierre-Emerick Aubameyang, however, Arteta is hoping to convince the striker to stay.

However, The Times say regardless of Aubameyang’s future, Arteta wants to get rid of the deadwood at the Emirates.

The Arsenal boss is set to sell Sead Kolasinac, Matteo Guendouzi, Lucas Torreira and some of the centre-backs at the club.

That could see Sokratis, Shkodran Mustafi, Rob Holding and even David Luiz sold.

Arsenal have also confirmed that highly-rated centre-back William Saliba will return to the club ahead of next season.

DON’T MISS: How Arsenal could line up with Partey and another new face

It remains to be seen whether the 19-year-old will be a part of Arteta’s plans next season.

Saliba could end up slotting in alongside Pablo Mari as Arsenal’s starting centre-halves next time out.

As for Arsenal midfielder Guendouzi, the Frenchman seems on borrowed time at the Emirates.

The 21-year-old was left out of Arteta’s squad for the third consecutive game on Wednesday night as Arsenal hammered Norwich 4-0.

Guendouzi’s last appearance for Arsenal came in their 2-1 defeat at Brighton last month, where the midfielder clashed with Neal Maupay, grabbing the striker around the neck at full time. 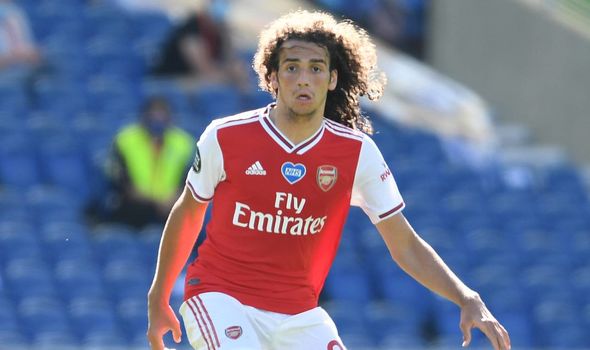 Arteta has previously disciplined Guendouzi for his attitude and behaviour.

When asked why Guendouzi didn’t make his squad for Arsenal’s 4-0 win against Norwich, Arteta simply said: “For the same reasons as last week.

“Things have to change and nothing has changed.”

Guendouzi has been tipped to leave the Emirates after his fall out with Arteta.

A lot has been made of Arsenal’s transfer plans, with Gunners hero Charlie Nicholas claiming Arteta could easily sell 10 players this summer.

He said: “They do not have a centre-back of prominence at the club. Sokratis, Shkodran Mustafi and David Luiz are just simply not good enough.

“They spent around £8million on David Luiz, who has won the Premier League and the Champions League. The craziness is that he was better than what was already there.

“That should show those players just how bad it is and also how bad it is for Arteta. Kieran Tierney cost £25m but is not yet fit, we have no centre-backs, Sead Kolasinac cannot defend either.

“Arteta has inherited this team, and it has been a disaster defensively. Pablo Mari is not the answer I don’t think.

“If you have to sell Luiz, Sokratis, Mustafi, Ozil to get him off the wage bill, Kolasinac too, then do it.

“Take the money for Pierre-Emerick Aubameyang if the right amount comes in, and sell Granit Xhaka as well.

“There are ten players Arsenal could sell. It goes into a fund to get more defenders.”