Arsenal boss Mikel Arteta wants to see his side improve in three areas against Olympiakos following their 2-1 win over north London rivals Tottenham at the weekend. The Gunners came from a goal down to beat Jose Mourinho’s side courtesy of goals from Martin Odegaard and Alexandre Lacazette.

That followed on from an impressive victory over Olympiakos in the first leg of their Europa League last-16 tie.

But they were far from convincing against Tottenham despite Spurs going down to 10 men for the final 15 minutes.

Arteta’s side struggled to keep hold of the ball as Tottenham continued to push for an equaliser.

Eventually Arsenal managed to hold on but Arteta wants to see improvements against Olympiakos this evening.

When asked what his side need to do differently against the Greek side, Arteta said: “Everything different than what we did on Sunday against ten men.

“Stop giving simple balls away, stop putting ourselves in trouble and give a clear direction of where we want to have the ball in those minutes.

“Play simple and be sure that we can win and manage the situation much better than we did.”

He added: “Sometimes it happens. Sometimes you see that one or two actions leads to give momentum to the opponents.

“You get a little bit more tense and you start to have the fear of losing something.

Arsenal hold a 3-1 advantage over Olympiakos and are among the favourites to win this year’s Europa League.

Pierre-Emerick Aubameyang is expected to come back into the starting line-up after being disciplined for being late to the game against Tottenham. 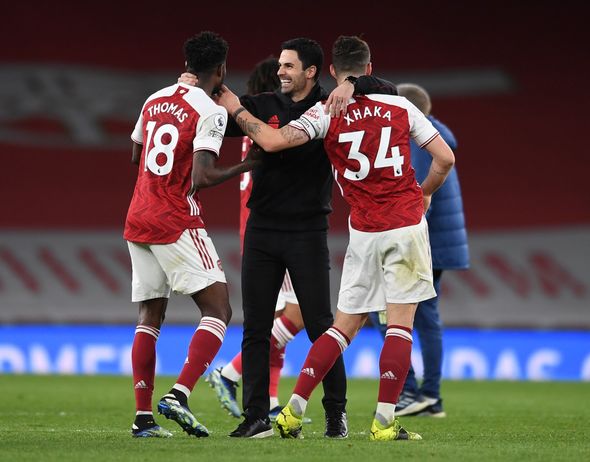 And Arteta insists the club have moved on from the situation with their striker.

When asked how Aubameyang has reacted to being dropped against Spurs, Arteta said: “Really positively.

“That’s why I said that this is over. We move forward in a positive way and there is no more comments to make on that.

“He trained really well the last two days. He was smiling as usual as we all expect from Auba. It’s all good.”