Arsenal head coach Mikel Arteta insists he wants to keep hold Pierre-Emerick Aubameyang “in any circumstances” as the Gabon international is increasingly linked with a move away from the Emirates Stadium.

Aubameyang joined the Gunners for a then-club record £56million deal from Borussia Dortmund in January 2018.

The forward’s current contract only runs until next summer so in less than 12 months time he can sign a pre-agreement with a foreign side.

However, Arteta is desperate to keep his top scorer as he plans to overhaul the squad this summer.

And the Spaniard has demanded a crunch meeting to thrash out terms on a new deal.

“We will have to do that before the end of the season,” Arteta said.

“I want to keep him in any circumstances.”

Barcelona were reportedly considering a move for the 30-year-old in January and they may reignite their interest when the transfer window reopens.

But for now Aubameyang needs to keep firing if Arsenal are to have any hope of making it into the top four.

Arteta’s side are 10th in the table – eight points behind fourth-placed Chelsea but with a game in hand.

Their only hope of qualifying for the Champions League next season, which could be the deciding factor in Aubameyang’s decision, will come in the league after Arsenal crashed out of the Europa League against Olympiacos.

During the dying seconds of the second leg against the Greek outfit Aubameyang missed a glaring chance from just a few yards out.

And Arteta has had to pick his star man up after his confidence took a knock.

“He was down and felt responsible about what happened,” Arteta explained. “We need him happy and smiling and that’s what he’s been these few days.” 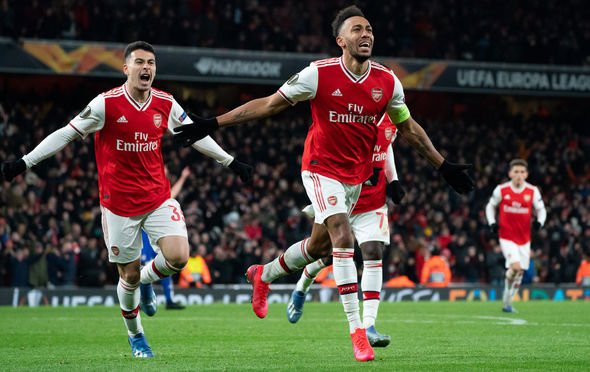 Arsenal take on Premier League strugglers West Ham on Saturday and Arteta knows only a win will suffice to keep their Champions League hopes alive.

“Beat West Ham on Saturday and we are closer [to the top four],” the Spaniard said.

“A few weeks ago it looked impossible but if we beat West Ham it will be more possible.

“They caused a lot of problems for big teams. I worked with David [Moyes] for seven years and I know how structured he will be.

“The thing I admire the most is how he treated people and builds a culture at the club. I spoke with him a few times. He’s always been really supportive.”