‘My job is to give the manager a big headache’: Alexandre Lacazette keen to force his way into Mikel Arteta’s side after Arsenal forward bagged winner against West Ham

Alexandre Lacazette came off the bench to score the only game of Saturday’s win over West Ham before declaring he is pleased to have given head coach Mikel Arteta a headache.

The France international striker has been playing second fiddle to Eddie Nketiah of late following an indifferent run of form in front of goal.

But he came to the rescue as his 78th-minute strike, awarded by VAR after originally being ruled out for offside, secured a 1-0 win over the Hammers.

Arteta admitted after the game that having to choose one of either Lacazette or Nketiah was making his life difficult – but Saturday’s match-winner would have it no other way.

‘This is my job, to give the manager a big headache because he’s putting together the first 11,’ he told the club’s official website.

‘I am happy to score and we won so everything is good. We have to play well to get a game.

‘Everybody wants to give their best and normally when everyone does we perform well.’ 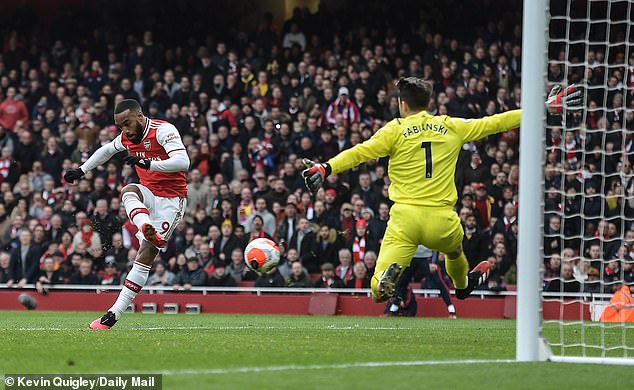 The victory keeps Arsenal’s hopes of European qualification for next season alive – but Lacazette does not want to start working out what is required from the run-in to achieve their goals.

‘It’s too early I think to count the points,’ he added.

‘We’re going to play and see at the end of the season where we finish. We won three points (against West Ham) and that was important for us in the table. It was hard, and a difficult game, we are lucky I think.’

Arsenal certainly did ride their luck for large portions of the game as West Ham missed a host of good opportunities to take the lead before Lacazette struck.

The defeat ultimately leaves West Ham outside the relegation zone by virtue of goal difference alone and forward Jarrod Bowen – who hit the post in the early stages – knows the Hammers need to be more clinical to avoid the drop.

‘We need to be more ruthless in front of goal, but again the performance levels and the work ethic were there. It’s just that final bit which is crucial,’ he said.

‘It was a case of us working hard, being disciplined without the ball, have a good shape and frustrating them.

‘We’re focused on ourselves and we can’t worry about what’s going on around us.

‘We know the quality we have got and we know that we need to keep on performing as we have done in recent weeks – but being more ruthless in front of goal to get the three points we need.’