Ajax 1-6 Napoli: Serie A leaders continue their blistering form to maintain 100% record in Liverpool’s group as they come from behind in style in Amsterdam, with Giacomo Raspadori netting twice

Giacomo Raspadori netted twice as Napoli came from behind to deliver a masterclass and score a runaway 6-1 win at 10-man Ajax Amsterdam in the Champions League on Tuesday.

Captain Giovanni di Lorenzo, Piotr Zielinski, Khvicha Kvaratskhelia and substitute Giovanni Simeone added the other goals for the Italian league leaders, after Mohammed Kudus had given the hosts the lead inside the opening 10 minutes.

Napoli, who might have scored more such was their dominance, have a 100% record at the halfway point in Group A, leaving Ajax with three points from their opening three games and in danger of missing out on next yearâs knockout stages after their biggest defeat in European football.

Ajax coach Alfred Schreuder had warned on the eve of the game about the attacking threat that Napoli posed but, even then, would not have expected his team to be so thoroughly outsmarted.

Ajax, who had lost at Liverpool in their previous group game, went ahead in the ninth minute when Kenneth Taylor’s goal-bound shot hit team mate Kudus on the shin and deflected into the corner of the net.

It proved the only highlight for the packed house at the Amsterdam Arena as Napoli did not take long to work their way into the game, pressing Ajax into mistakes, cutting them apart with swift attacking moves and finishing with aplomb.

Raspadori equalised in the 18th minute with a diving header at the back post at the end of Mathias Olivera’s cross from the right. 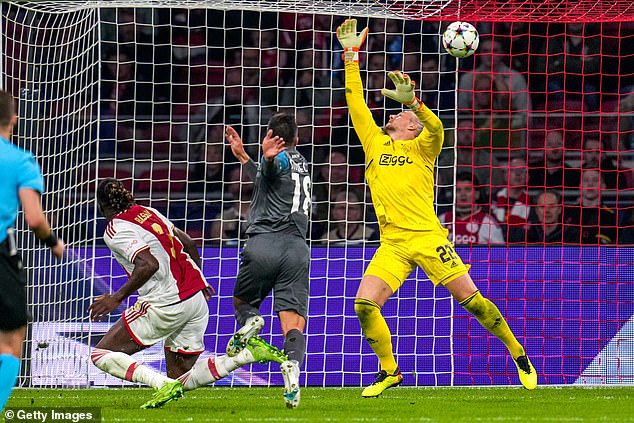 A simple corner routine saw Georgian Kvaratskhelia, who produced another performance to emphasise his growing reputation in European football, deliver a cross for Di Lorenzo to power home a header for a second goal.

Napoli extended their lead on the stroke of half-time with Andre-Frank Zambo Anguissa driving forward from his own half before setting up Zielinski to finish.

Two minutes after the break, Zambo Anguissa then stole possession as Ajax were caught trying to pass their way out of defence and set up Raspadori for his second goal.

Kvaratskhelia made it 5-1 in the 63rd minute, showing strength and guile in a simple one-two passing move with Raspadori. The damage was already irreparable when Ajax captain Dusan Tadic was sent off and Napoli continue to press home their advantage, with Simeone scoring the sixth in the 81st minute.

‘We give away childish goals. 1-6 is of course far too much. We have to raise our level. Unfortunately, Napoli made that clear to us.’

The two clubs meet again next Wednesday in Italy where Napoli can make sure of progress to the next stage.