Alfredo Morelos made a stunning return to form against 10-man Aberdeen as his brace fired Rangers 22 points clear at the top of the Premiership.

While captain James Tavernier failed to make it 10-in-a-row from the penalty spot, Steven Gerrard’s team claimed another huge result in their quest for title number 55 thanks to Morelos’ efforts during the 2-1 win at Pittodrie.

The Colombian has not been at his prolific best this term but he produced two lethal finishes to kill off the Dons. 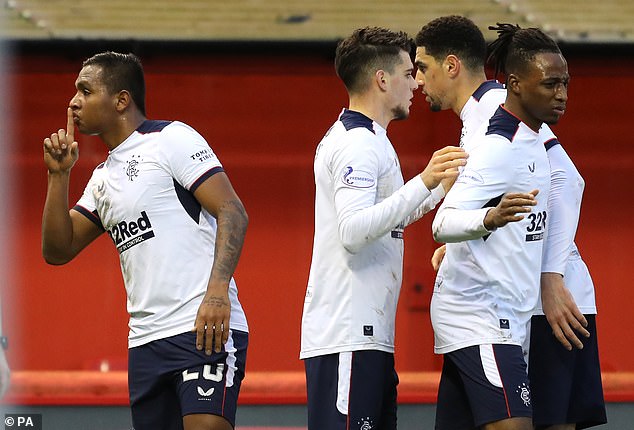 Tavernier should have fired the runaway leaders ahead when Ryan Hedges was sent off in the 26th minute for fouling Morelos in the box – but nudged wide as he missed from 12 yards for the first time since October 2019.

But Rangers – who kicked off the season with victory in the Granite City – did march on to their first Pittodrie double since 2011 and will feel they have ticked off another major test of their title credentials.

Aberdeen remain third but will be disappointed they could not heap more pressure on during the final stages after seeing Matty Kennedy pull one back with 23 minutes remaining.

Derek McInnes was forced to do without Ross McCrorie against his parent club while Gerrard made just one change to last week’s Old Firm-winning line-up as Ianis Hagi replaced the injured Kemar Roofe. 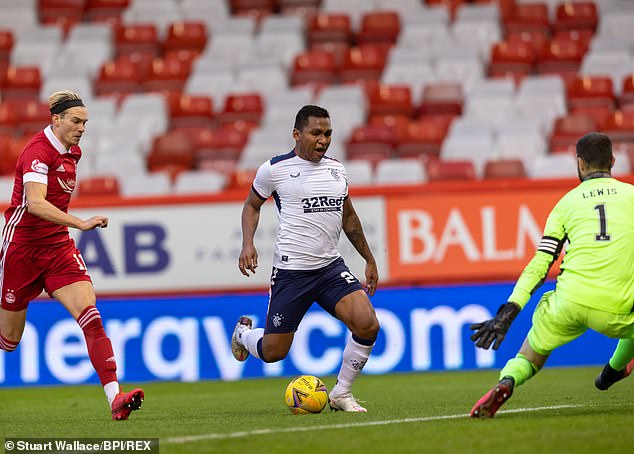 Ryan Hedges concedes a penalty as he clips Morelos, being dismissed with the score goalless 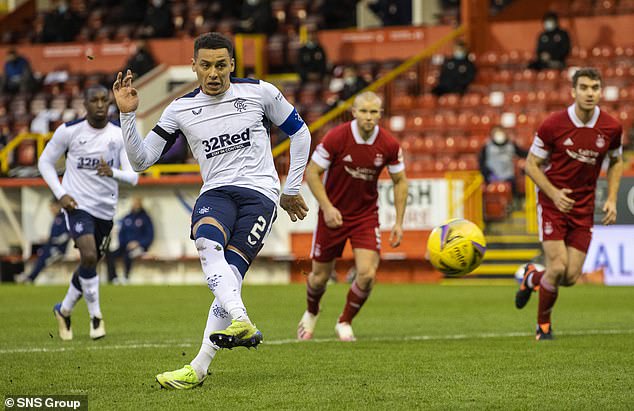 James Tavernier misses the penalty, only to have his blushes spared by Morelos minutes later

Neither defence covered themselves in glory during a sloppy start to the game.

Ash Taylor was first to switch off as he let a Tavernier ball sail over his head inside the first 30 seconds, with the Aberdeen defender grateful to see Morelos scuff his shot.

Rangers’ centre-backs were just as sluggish as Hedges’ punt forward was allowed to bounce through for Curtis Main. Strike partner Sam Cosgrove raced on to the flick-on as Connor Goldson went to ground far too easily but he made a mess of his finish despite having only Allan McGregor to beat.

It looked initially like both teams were setting up for an open, entertaining affair. Hagi fizzed one over the bar for Gers while Scott Wright’s pace gave the hosts a threat down the left. 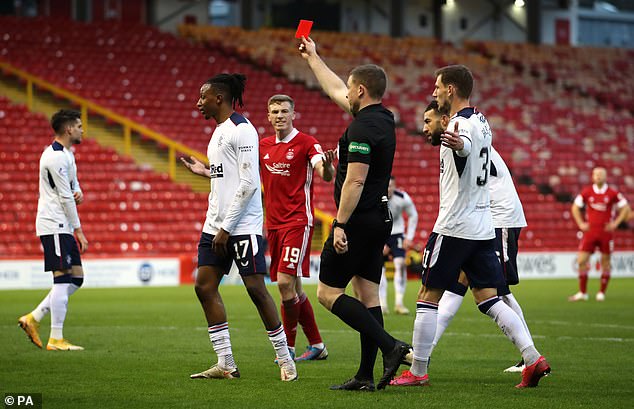 Despite being reduced to ten men, Aberdeen hit back courtesy of Matty Kennedy to make it 2-1 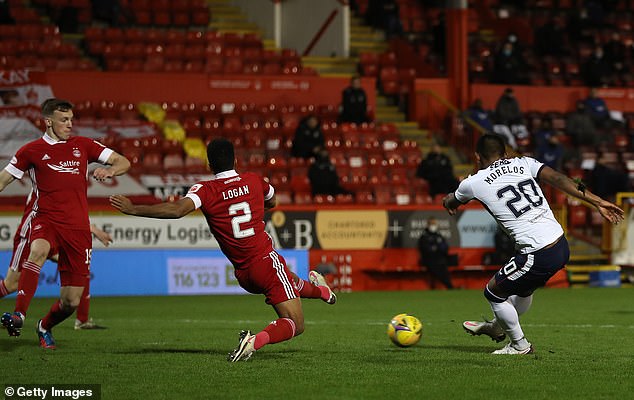 By that time, Morelos had made his mark again shortly after the break to put the visitors 2-0 up

But Gers soon found their rhythm and grabbed the game by the scruff of the neck.

Aberdeen had left-back Jonny Hayes to thank as he booted a Ryan Kent effort off the line before Joe Lewis parried away Tavernier’s follow up.

They should have fallen behind when Tavernier’s run of flawless spot-kicks came to an end.

Morelos worked a clever one-two with Joe Aribo before bursting into the box. The Colombian prepared to pull the trigger but instead found himself tumbling forward after Hedges clipped his heels from behind. 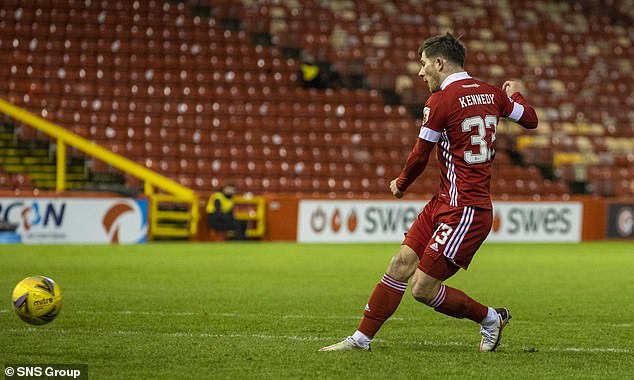 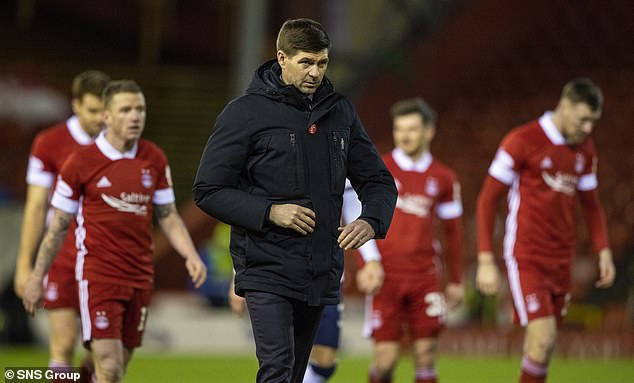 Referee John Beaton was straight on the spot flashing red but Tavernier could not make it a double boost with the opener as his penalty skidded frustratingly wide of the post.

Last season, the Ibrox skipper may have allowed that blunder to play on his mind but he has shown greater resolve this term.

Dusting himself down, he played a key part as Rangers did grab the lead five minutes later. Kent collected Tavernier’s low ball into the box before feeding Morelos. With Wright and Taylor both sleeping, the striker took his chance to spin and drill a fabulous finish past Lewis.

Things almost got worse for the Dons just before the break as Main launched himself into a nasty studs-up challenge on Borna Barisic. Beaton decided it was worthy of only a yellow but McInnes decided keeping the striker on was no longer worth the risk and immediately replaced him with Shay Logan. 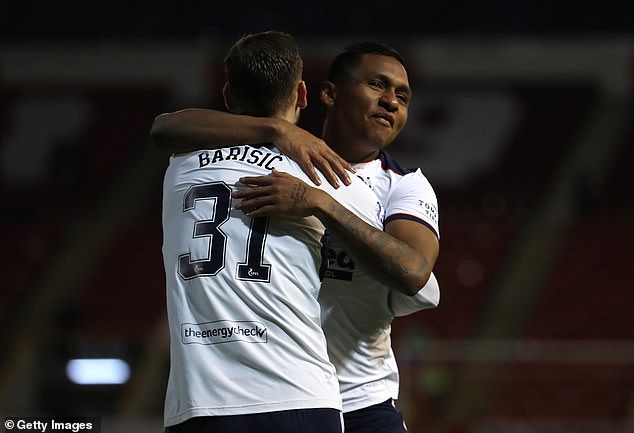 The win puts Rangers 22 points above  Celtic, who have four games in hand on their arch-rivals

But it made no difference to the league leaders who started the second half they way they finished the first, netting a second inside five minutes.

Again the threat came from the right as this time Aribo fed the ball into the box. Another deft flick from Kent found Morelos and with his confidence surging the 24-year-old drilled home his 10th goal of the season.

But Aberdeen were allowed to grab a lifeline after 67 minutes as the Light Blues defence switched off. Cosgrove sent the ball down the right for Hayes, who cut back for unmarked substitute Kennedy to slot home.

That was the wake-up call Rangers needed as they carefully managed their way to a 15th straight win. 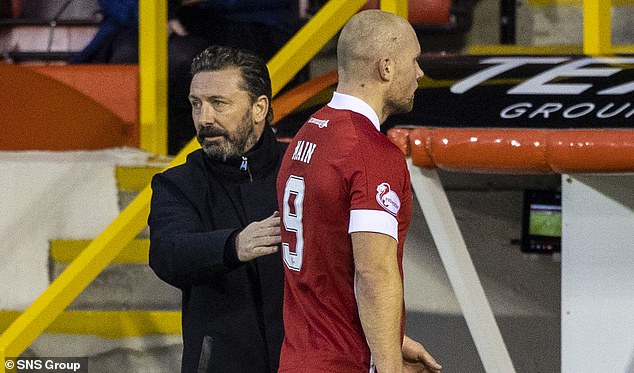