A-League clubs are bracing for a multimillion-dollar financial hit as a result of the federal government's move to effectively ban mass gatherings of more than 500 people from Monday onwards.

This weekend's fixtures could be the last time fans will be able to attend A-League fixtures within Australia this season, with club sources fearing the cash-flow implications of playing behind closed doors as a result of the coronavirus pandemic and the potential for up to $2 million in lost revenue from the finals series.

Wanderers fans were in full voice at the last A-League derby in Sydney, but the next one is likely to be closed to the public.Credit:AAP

Football Federation Australia and A-League management gave the green light on Friday for fans to attend all games this weekend – including W-League semi-finals, the National Premier Leagues, the early rounds of the FFA Cup, and grassroots and community fixtures. A raft of "mitigation protocols" will be implemented, including bans on supporter-player contact, player walkouts with mascots, handshakes and strict media access rules.

FFA chief executive James Johnson said the game's COVID-19 working committee had a "long debate" over whether they should follow the lead of the NBL and AFLW and start playing behind closed doors straight away, but decided to follow the government's lead.

"They have more information than what we do and they are the experts. We are acting in line with that advice," Johnson said. "Of course it's for the fans to decide if they would like to come and if they can come. If they don't want to come, they don't have to come."

Johnson said as far as he was aware, no players had yet been tested for coronavirus.

He was reluctant to speculate what would happen with matches next week, but said the sport would follow the government's advice on mass gatherings of more than 500 people. That leaves them with two clear options: suspend matches or play behind closed doors.

"That position, we have not taken yet, we are considering it and we will have a view on that after the next meeting of the national cabinet on Sunday," Johnson said.

Both have the potential to drain the coffers of A-League clubs, who are already financially stricken.

A-League clubs are not as reliant on ticket sales as teams in the AFL or NRL – indeed, some actually lose money from home games because of unfavourable stadium deals. But it still remains a major source of revenue, along with memberships. Some clubs are wary of the prospect of having to partially refund memberships to fans who are locked out of stadiums. 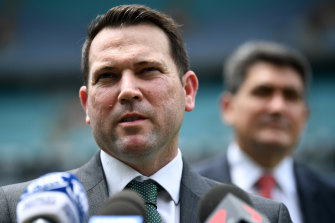 "These are things we're going to have to assess and work closely with the leagues on as we move forward," Johnson said.

Next week's Sydney derby at Bankwest Stadium was looming as a lucrative gate for the Western Sydney Wanderers, but instead it will almost certainly be played out in front of empty grandstands.

But the biggest concern revolves around the finals series, which is due to begin in May.

Ticket sales from the finals used to go straight into FFA's coffers, but with the A-League now operationally independent of the governing body, that money was to go to the clubs this season. One club source estimated the finals series alone – comprising five games, including the grand final – would be worth around $2 million in ticketing revenue.

There is also a potential issue involving the Wellington Phoenix. The government has advised against all "non-essential" international travel, and Johnson was unsure what that meant for trans-Tasman flights for A-League teams.

"It's a very complex question," he said. "We've set this committee up to deal with these exceptional circumstances. As far as I'm concerned it's international travel, so we will need to follow the advice of the government strictly on this point. It's something we're going to have to consider when we meet again on Sunday."

Meanwhile, all travel involving Australia's men's and women's national teams has been suspended. The situation would appear to put not only the Matildas' Olympic campaign in doubt but also the Socceroos' participation at the Copa America.

"We have to wait and see what the world will look like come the middle of this calendar year," Johnson said. "We are in touch with CONMEBOL and FIFA on a daily basis on this matter, but there's no update at this stage."