Worcester stunned Wasps at Sixways to secure their first victory over their Midlands rivals since 2013.

This was also the first time the Warriors had won three straight home games since December 2019 with tries from Joe Simpson, Duhan van der Merwe, Ted Hill and Will Chudley flooring Wasps.

The hosts had giant Scotland and British & Irish Lions wing Van der Merwe to thank for their first try as he broke down field before putting Simpson over for the score. Wasps struck back through Dan Frost with the mobile hooker racing over after collecting a pass from Jimmy Gopperth.

At 17-14, the game was finally poised, but then Worcester thundered back with a further penalty from Fin Smith and a try for co-captain Hill.

After the interval, Worcester got the scoreboard moving once again within a few minutes with replacement nine Chudley crossing for their fourth try.

As the half wore on, Wasps started to apply a huge amount of pressure on the hosts with Graham Kitchener seeing yellow for the hosts. 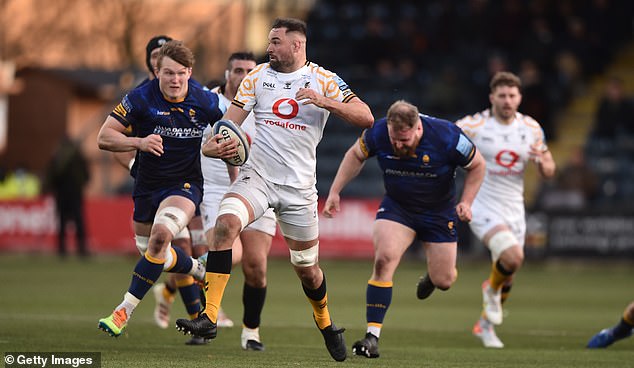 The numerical advantage paid almost immediate dividends with replacement Sam Wolstenholme crossing. With just minutes left on the clock, Wasps kicked to the corner and after claiming the line-out, worked their way over thanks to Tom Willis. It was too little too late.

Worcester head coach Jonathan Thomas said: ‘Confidence and momentum is a massive thing in sport. There is no bad team and no bad squad in this league at the moment and confidence is the difference between winning and losing. Our confidence is building.

Wasps head coach Lee Blackett said: ‘Some of our game management was a lot better in the second half and I thought we applied the pressure. We are walking away with a one-point loss and we are pretty disappointed.’