Nathan Buckley is a legend of the game, in the sense that his story is one of the biggest in the sport, containing Shakespearean elements.

Twice, Buckley chose Collingwood, first as player and then as coach. Driven and demanding of himself and others, he won almost every individual honour as a Collingwood player, but fell short of the one that he most coveted; the defining moment was probably the 2002 grand final, when he took the Norm Smith Medal in a losing side, his valour insufficient to overcome a superior Brisbane Lions side in a close game.

If Nathan Buckley makes it as an AFL legend it will be for his playing career.Credit:Ray Kennedy

History repeated in his coaching stint. Buckley inherited a team that had won a flag and then lost a grand final, taking over from an unhappy Mick Malthouse just as they were heading south.
Collingwood was patient and gave him four years out of the finals, but their faith was arguably vindicated when the Magpies rose up to within two minutes of winning an improbable premiership in 2018.

The Pies were close again in 2019 (losing by a kick in the preliminary final), but the vision of Buckley hoisting the premiership cup for Collingwood – one that Eddie McGuire long shared with his black and white tribe – ended suddenly on Wednesday.

Buckley’s demise as coach came a day after the AFL confirmed that Adam Goodes had spurned the opportunity to enter the Australian Football Hall of Fame, the Sydney great having become estranged from the game as a result of the shameful booing of 2014 and 2015, and hurt by the AFL’s pitifully inadequate response.

There are only 29 official legends of the game and 300-plus in the hall of fame. As a two-time Brownlow medallist and premiership player with more than 360 games, Goodes would be a candidate to eventually reach legend status had he accepted his gong. 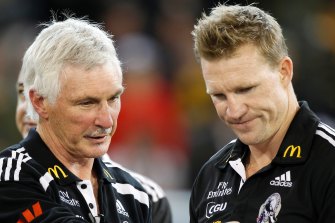 Mick Malthouse and Nathan Buckley in 2011, before Buckley took the reins from his mentor.Credit:Paul Rovere

But if the Hall of Fame does take into account the player’s presence in the game and what the player meant to the club and game – the late Trevor Barker, for instance, personified the Saints of the ’70s and ’80s – the poignancy of Buckley’s near misses and the dignity he carried throughout his travails will have little bearing on whether he gets the legend gong.

The AFL’s policy is to admit about 10 per cent of Hall of Famers as legends, with just one selected every two years, and there is a renewed push to admit deceased greats of the game who have been overlooked, including coaches and champions from South Australia (Fos Williams, Jack Oatey, Ken Farmer) and Western Australia (George Doig, Bill Walker, John Todd).

Carey and Gary Ablett senior are clear-cut legends on football deeds, but their ascension has been postponed indefinitely due to off-field shortcomings. Jason Dunstall will be made a legend in due course, having retired more than two decades ago.

Voss might make legend on the back of being the alpha player of those premiership sides and Hird, once the drugs saga recedes from memory, will be judged on a similar plane as Voss – he just may need to wait a little bit longer. Chris Judd would stand a decent chance of legend-dom, too.

Of the current players, only Dustin Martin and Lance Franklin shape as probable future legends. Nat Fyfe, despite two Brownlows, hasn’t quite reached that station yet. 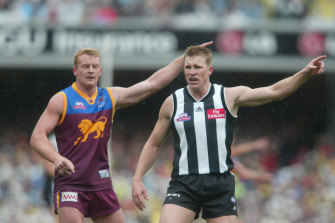 Michael Voss and Nathan Buckley during the 2002 grand final, won by Brisbane.Credit:Sebastian Costanzo

Collingwood’s Dick Lee, who won the VFL goalkicking six times and blazed a trail for all subsequent full-forwards, could well be elevated to legend in the coming years, more than 90 after he finished.

At best case, thus, Buckley will be waiting for decades before he is even considered for legend. The case for him making it – which some within football do – is that premierships should not be a measure, any more than they were for Bob Skilton (who did have three Brownlows, not one), and Kevin Murray (Fitzroy).

If he is among Collingwood’s greatest few post-war footballers, he is still not in the company of Carey, Tony Lockett, Matthews, Dunstall and is now beneath Franklin, Martin and both Abletts.

As with his quest for that flag, Buckley could well just fall a kick short.

Not that it ultimately matters. Within the game and those who follow it, his story – and impact on the code – will reverberate stronger and for longer than quite a number who get the legend nod.