Nearly 33 years after they had lost the unlosable grand final, Collingwood greats Peter McKenna, Len Thompson and Des Tuddenham received a surprising apology from Bob Rose, the man who had coached them on that afternoon that they would never get over.

"On his deathbed, he apologised to me, Tuddy and Thommo," recalled McKenna, the game's pop-star full-forward of the early '70s. "He apologised to us that he couldn't get us over the line for a premiership."

"It was massively significant. It gave them [the Blues] a confidence and arrogance they didn't have before," said McKay, 70, the former ABC commentator who now lives in Inverloch, where he has been recovering from bowel cancer.

In the minds of many, McKenna and "Tuddy" included, 1970 was the unmaking of Collingwood. Rose quit as coach 12 months later, Tuddenham – still incensed that he wasn't captain in 1970, that he didn't coach the club and that he didn't belt Ted Hopkins – left to be playing coach of Essendon after 1971.

Rose, said McKenna, was "demoralised" by the 1970 grand final, the third narrow grand final defeat the stoic coach and ex-champion had endured. Lou Richards, a Collingwood captain in the '50s and the game's most visible media performer, subsequently coined a phrase for Collingwood's finals failures: "The Colliwobbles", which continued until their 1990 drought-breaking premiership.

Later this year, virus-willing, the Carlton team of that year will celebrate the 50th anniversary of the 1970 premiership, while some Collingwood souls – McKenna and Tuddenham among them – will quietly mourn.

The 1970 grand final stands as the most consequential match in the history of Australian rules football, the game that mattered most – more than the gladiatorial 1989 classic between Hawthorn and Geelong, ahead of the solitary 1966 St Kilda triumph by one point, besting for influence Kevin Sheedy's storied first as Essendon coach (1984), West Coast's 1992 breakthrough (the first by a non-Victorian team), Sydney's 2005 thriller, the drawn grand finals of 1977 (the first televised match of footy) and 2010 and the Bulldogs' Cinderella flag of 2016. 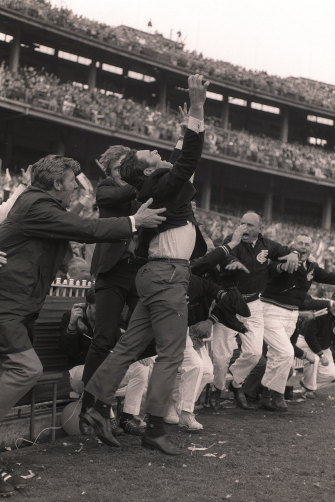 If the televised 1989 grand final is more vivid in our memory due to Gary Ablett's brilliance, the violence and valour that saw Dermott Brereton and others from both teams skittled in a high-scoring thriller, that match – for all its drama – stood as an event by itself, rather than as a sliding door for clubs, individuals and the game.

1970 made Carlton into the modern superpower and flattened old-school Collingwood, their fiercest long-range rival. It contained the sport's most famous mark, by the balletic Alex Jesaulenko, who leapt, almost off one step, on to the back of Collingwood's hapless ruckman Graeme "Jerker'' Jenkin.

The game was witnessed by the largest crowd in the code's history, 121,696 (only preacher Billy Graham drew more to the MCG), who also saw the biggest and most improbable comeback in grand final history. The game confirmed Barassi's stature as a super coach, a platform for him to reinvent hitherto downtrodden North Melbourne; indeed, one could argue that whole concept of a coach making audacious moves to turn the tide – as Sheedy did in 1984 – took root in the second half of the 1970 grand final.

One player's career was entirely defined by the second half, a blond small forward/rover who came off the bench at half-time to boot four goals for the Blues. Ted Hopkins, one of a few eccentrics in the Carlton side (Brent Crosswell and John Goold the others), would quit footy soon afterwards to dabble in poetry and publishing, before making a major contribution to football by founding Champion Data, the company that codified and created a statistical understanding of AFL footy, a role it still fulfils without Hopkins.

The power of 1970, compared with every other game of Aussie rules, lies in the consequences. The ripples in the pond spread further, for longer, recounted brilliantly in a superb, evocative book on the game, 1970 & Other Stories of the Great Australian Game, by the writer Martin Flanagan, who surmised that 1970's potency derived from these flow-on effects when he penned the book 20 years ago. 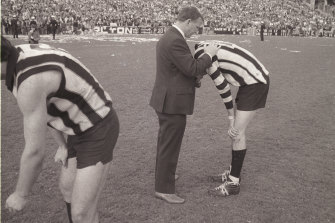 McKay became a good friend of Thompson as colleagues at the ABC. McKay said that Thompson felt that his life would never work out as well as it might have because of 1970's failure, as "Thommo'' – a complex, thoughtful man – subsequently faced financial hardships and was forced to sell his 1972 Brownlow Medal, before his premature death in 2007.

"He gave me the impression that [1970] can impact on your life from there on onwards.''

Where 1970 differs isn't in the quality of the match (though it was exciting), but in the sub-plots and long-term impact of a team recovering from a 44-point deficit to win by 10 points.

The question of whether the modern play-on game was invented in that second half remains contested. Robert Walls thinks that Barassi's instruction to "play on and take risks'' was significant to the outcome, not so much in the volume of handball, but where they handballed – from defence, in an attempt to move it quickly and over the top of Collingwood's defence, as they did in an eight-goal run in the third quarter.

"Words like bold and daring were used a lot,'' said Walls, noting that other coaches might have sought to engineer a respectable loss in 1970, instead of daring to win, as Barassi did..

The most fateful moment for the Pies came in the second quarter when Tuddenham knocked out McKenna, who'd booted five goals to that point and still cannot remember the second half (a blessing of sorts). "I went for Kevin Hall [Carlton's full-back] and hit Peter by mistake," Tuddenham told the Sunday Age.

The game also encapsulated, via the trajectory of the clubs, tectonic shifts in Australian society. Collingwood was, as Flanagan wrote, the foremost club of old Australia, with its Labor Party-like egalitarianism, solidarity and old-school values of playing "for the guernsey'' rather than money – verities that were being overtaken by commerce and cosmopolitan culture.

Tuddenham and Thompson, for instance, had gone on strike in February of 1970 in protest at their pay after the club recruited a West Australian import Peter Eakins, in what was a rare instance of Collingwood bending their trade union-like values to accommodate a recruit. 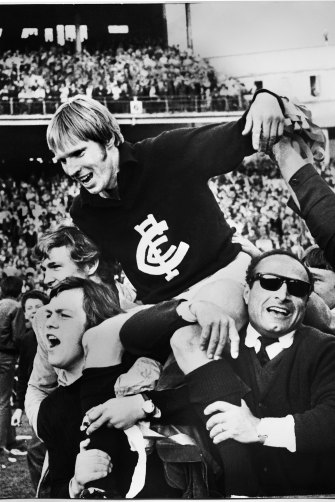 Ted Hopkins starred in the second half for the Blues.

Carlton, conversely, was an entrepreneurial club, led by businessmen, that recognised the game was becoming a business and was willing to vary player payments accordingly. As Carlton's 1970 centre half-forward and 1987 premiership coach Walls recalled, Barassi spoke to the players about why Syd Jackson, a sublime Indigenous footballer from WA, was being paid double what the likes of young Walls were getting.

Collingwood, which did have a highly talented team, did not recruit an Indigenous player of note from WA or anywhere for decades. Nor did they house blatant eccentrics such as Crosswell, Hopkins or Goold.

"It is my view that if Collingwood won the game, their whole modern history is different,'' said Collingwood's in-house historian Michael Roberts. "Tuddy stays. Bob Rose stays We probably win another premiership in '71 or 73 … there's no Colliwobbles, no 32-year drought.''

The most prescient comment in Flanagan's book comes from Carlton's legend and 1970 skipper John Nicholls. "The biggest mistake in footy is to think you're better than you are. That was Collingwood's mistake in 1970." Flanagan added: "Nicholls fears his club may be heading down a similar path."

Lean times came later for Carlton, still in recovery after the game left their rapacious ways behind. Collingwood have modernised, yet retain an insularity: Nathan Buckley, their favourite-son coach, has Rose-like resilience and bad luck.

Let's hope that Carlton's 1970 team finds a way to celebrate the half-century since that mythical game, and that the vanquished melancholy Magpies, too – Tuddy, McKenna and traumatised teammates – find a way to cherish what they did. A wake, after all, still brings people together.