Which brings us, on the weekend of the NRL grand final, to the wise words of Jerry Seinfeld, back in the day.

“Loyalty to any one sports team is pretty hard to justify because the players are always changing, the team can move to another city,” he said. “You’re actually rooting for the clothes, when you get right down to it. You know what I mean? You are standing and cheering and yelling for your clothes to beat the clothes from another city. Fans will be so in love with a player, but if he goes to another team, they boo him. This is the same human being in a different shirt; they hate him now. ‘Boo! Different shirt! Boo!’”

Right on the money, yes, when you think about it? But with a couple of notable exceptions . . .

Aren’t Souths and Penrith the two teams where both the numbers and the vibe point to lots of the players actually being from the area they represent?

And as discussed last week regarding Michael Maguire yelling,“We are the Wests Tigers!” to a team where not one of them had been wheeled down Norton Street in a pram and the whole thing rang hollow, this is surely part of the reason both Souths and Penrith have done well in recent times. They boast players who were born and bred for the role. They so care for the jersey they wear that the fans really are cheering for more than a bit of laundry.

And speaking of old-time values.

When it comes to Wayne Bennett, your humble correspondent has had the odd difference with him over the years – chiefly on concussion protocols – but I am wondering if any coach in the world can match his performance for premierships and longevity? When you look at it, he coached his first premiership-winning side in 1979 in the Brisbane comp, and then coached winning sides in the eighties, nineties, noughties, teenies and is right on the edge of achieving the same in this decade. That is extraordinary success across five decades, and if Souths win tomorrow he will be the first person in league history to coach three teams – Broncos and Dragons are the first two – to premiership glory.

As we speak, he has coached 885 first-grade games, meaning he can just about see the AFL’s Mick Malthouse in his rear-view mirror on 718 games. And yes, there is Sir Alex Ferguson who achieved more success with Manchester United and in Scotland, but even that great soccer coach retired in 2013, while Bennett looks to be just breaking into his stride. 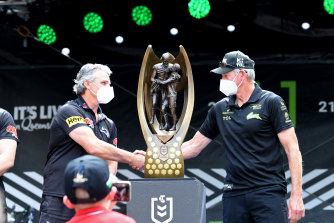 Most impressive of all? The stories you hear about Bennett are similar to the ones you hear about Craig Bellamy – coaches who genuinely care about their players, and the players respond in kind. Fascinating, yes, that something so old-fashioned as genuine care could be the foundation stone of two of the most successful coaches, even while so much of everything around them is now so whiz-bang technical?

And now we resume our normal service: NRL nark. Every time you think the players have set a record for stupidity that will never be beaten, they outdo themselves. Say you were a Melbourne Storm player in the days immediately after your elimination from the finals. Say there was some white powder on the table in front of you. Now say one of the blokes in the room with you brings out his mobile phone and starts filming.

Me? I would reckon “Shits is trumps on the blind,” and have some VERY strong words with him, before ensuring the footage was deleted. The Storm blokes didn’t appear to blink and it all ended in tears. Seriously, was it a world record or not?

And one last thing!

If you were planning an NRL grand final party on the sly on Sunday evening, please can it for all our sakes. In case you missed it, Victoria suddenly surged in terms of new infections from the 800s on Wednesday to the 1400s on Thursday, five days after the grand final. It has been attributed to Victorians getting together over the fence, in quiet gatherings, to watch the game. Make no mistake, people will die because of it. At a time when we in NSW at last have the numbers starting to move the right way, it would be madness to follow Victoria’s lead.

As to whether the NRL grand final itself should go ahead or be postponed or moved, as has been mooted, my suspicion is that whatever the medical advice, it will be very politically difficult to call it off at this late stage – barring a sudden surge in the numbers on Saturday morning. Watch this space.

As discussed in this space many times, the whole greyhound racing industry is a poxy one which long ago should have been banned. Racing dogs? Seriously? The outgoing Premier Gladys Berejiklian was a prime mover in the Liberals doing a screaming U-turn on the idea of banning it. Hopefully, with her departure, the next premier will have, after Mike Baird and Berejiklian’s own changing positions, a fourth Damascene conversion on the industry, and put the damn thing to bed.

#ICYMI, this was the boxer Tim Tszyu reminiscing this week in the Telegraph on his time playing rugby at Newington College: “There was no way I was getting in the middle though, not with the size of those big boys . . . so I stayed out on the edge at centre. I’d rather get punched in the face. Being tackled seemed to hurt me more. Although I did manage to sneak in a few punches.”

Bylaws of the ocean

And from left-field, one of my moles on the inside reports from the heart of the North Bondi Surf Life Saving Club. See, although by the club’s own admission it launched the patrolling season with no idea who was vaxxed or not, it at least found time to throw together a new set of patrol obligation bylaws for the season, my favourite of which is bylaw 1e:

Patrollers should always be ‘rescue ready’ – i.e. eyes on the water, and/or ready to enter the water if need be.

Seriously, friends, the club has been around since 1907. Do you reckon that after more than a century’s experience it is time to underline watching the ocean as a key tenet of surf lifesaving? 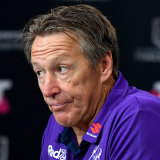 Craig Bellamy on the loss to the Panthers: “We got what we deserved and Penrith got what they deserved.”

Cameron Smith on two of his former teammates causing the traditional post-season fracas for being filmed with white powder before them: “For these players to go out and make such dumb choices, it’s really disappointing – I’m being completely honest, it’s extremely, extremely disappointing.”

Melbourne coach Simon Goodwin after they finally broke their AFL drought: “After 57 years of pain, it is coming home!”

The redoubtable Tina Arena reaches for the long handle when it comes to what has been supported and what has been shut down during the plague: “I also hate the differentiation between sport and arts in Australia. As the artistic community, we will draw the line in the sand now and say, ‘No more of your double standards now’. Sport is a great thing, but life is not just about sport, life is about art and culture … I would encourage the artistic community to come forward, and I’d encourage anybody else to start thinking straight now.”

Nick Kyrgios, 26, on his tennis future: “As long as I’m on the court I’ll try and give my best but I’m not going to lie and say I plan to play for four or five more years on tour, that’s just not me. I’m not one of those players now who’s going to go hunting for points or hunting for accolades or anything like that, I’ve got nothing left to prove to myself — I’m incredibly proud of what I’ve achieved.”

Naomi Osaka is now in the mood for some tennis:“I kind of have that itch again. It wouldn’t really matter to me if I won or lost, I’d just have the joy of being back on the court. I used to love the competition and just being competitive.”

Rory McIlroy after Europe got walloped in the Ryder Cup: “I think the most important thing for the US team is they are a lot of young guys that are great players but have bought into the Ryder Cup. I think that was probably missing in previous generations.” 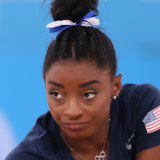 US gymnast Simone Biles says she shouldn’t have gone to Tokyo: “I should have never made another Olympic team after everything I’ve gone through for the past seven years.”

A statement from the NBA on Golden State Warriors star Andrew Wiggins: “The NBA has reviewed and denied Andrew Wiggins’ request for religious exemption from the San Francisco Department of Public Health’s order requiring COVID-19 vaccination for all participants age 12 and older at large indoor events.” It means if he remains unvaccinated, he can’t play any home games, or in those states around the USA that have similar rules, like New York, which denies access to indoor venues unless you’ve had at least one jab.

Alex McKinnon on the influence of Wayne Bennett: “A lot of people were there to give me a cuddle, a lot of people were there to support me – but he recognised that I needed a challenge at a time when I was on my knees. That’s what I needed. That’s what Wayne does . . . Wayne gave me a kick up the arse when I needed it. He gave me direction and challenged me at a time when I had nothing and I was at my darkest days.”

Team of the Week

Australia women’s ODI side. Their world-record streak ends at 26 matches after losing to India.

Tom Trbojevic. Won the Dally M Award as the best player this season.

Socceroos. Continue World Cup qualifying with a game against Oman on Friday (AEST).

Reece Walsh. The Warriors wunderkind was arrested on the streets of the Gold Coast last Saturday night, allegedly in possession of cocaine.