Queensland’s State of Origin teams have traditionally been a cutting edge against the outside world, akin to Australian cricket teams in the 1930s when we needed to show the Poms we could do more than grow wheat and sheep.

Stand in a taxi queue after a NSW humiliation at Brisbane’s Suncorp Stadium and the locals, bloated from four-hour lunchless luncheons, leer red-eyed at anyone daring to wear a blue shirt or scarf.

Dane Gagai reacts during the Maroons’ 26-0 Origin humilation in Brisbane on Sunday.Credit:Getty

(Anyone following in the wake of Chris Johns, the former Dragon and ex-president of the Broncos Old Boys, should prepare for a full body transplant.)

The poker machine-backed Broncos are luring NSW born players north, with Rabbitoh Adam Reynolds set to lead the club next year and Kotoni Staggs – also eligible for the Blues – their best current back.

The Brisbane club once supplied most players to the Maroons, yet NSW had one more Bronco than Queensland (prop Payne Haas) for the second Origin match, until winger Xavier Coates (off to Melbourne next year) was recalled.

So, after two successive defeats on Queensland soil, the autopsies of the Maroons’ combined 76-6 humiliation are taking place in the pubs and the boardrooms. 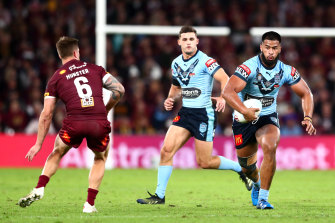 Payne Haas, right, playing in the blue of NSW, was the only Bronco in Origin II until his teammate Xavier Coates was recalled for Queensland.Credit:Getty

Nothing unites a rugby league committee like a losing coach but it seems Maroons coach Paul Green is safe, according to comments by QRL president Bruce Hatcher.

It’s not so much the Maroons’ current predicament but a future under ARLC chair Peter V’landys’s expansion plans that concerns Hatcher.

He told the Herald months ago he would prefer a Sydney club, such as Cronulla, to relocate rather than a 17th team be started in Brisbane from three Queensland bids lodged with V’landys.

Hatcher wants to protect Queensland’s 14-team state cup and not antagonise the leagues clubs that fund them.

However, NSW powerbrokers believe any future expansion plans should involve using state cup teams as a fully resourced reserve grade competition to the NRL. It suits the Sydney NRL clubs who follow the “nuclear” model where they control all representative juniors right up to the NRL team.

The Sydney-based NRL clubs have only one state cup feeder team, while Queensland’s NRL teams and the Storm have two or three each. The Broncos are affiliated with Wynnum Manly Seagulls, Souths Logan Magpies and Norths Devils. Queensland’s state cup teams also field the representative junior teams, rather than the NRL clubs, although many of the players are on scholarship with the Broncos, Titans and Cowboys.

The quality of play in Queensland’s state cup is probably superior to NSW, yet only the Storm use the system optimally.

In a round nine weekend where the Storm beat the Rabbitohs 50-0, Melbourne had 10 players, including top ones such as Cameron Munster and Jahrome Hughes, who had each played 38 or more matches for their Queensland state cup feeder teams, the Sunshine Coast Falcons and the Brisbane Tigers.

On the same weekend, where the Broncos lost 19-18 to the Cowboys, the Broncos had only one player who had tallied 38 state cup matches. So, the Broncos are buying NSW talent and not developing their own at a time Queensland has half the NRL player pool to draw from, compared to NSW.

Furthermore, increasing numbers of NRL Pasifika players are nominating to represent their country of heritage.

No wonder there are fears for the future of the Maroons. A 17th team, according to Hatcher, will dilute the existing player pool.

Expansion is the El Nino of football . It causes extreme conditions. We saw that when the old ARL added three teams overnight to the national competition and the Super League war broke out.

There are already enough extreme conditions on the field where rule changes promote momentum which produces blowouts.

Queenslanders seek a period of stability until a new generation arises to sharpen their cutting edge against NSW.