Having been swept up in the excitement of Lance Franklin’s 1000th goal, you’d be forgiven for wondering if Buddy might play forever.

At the time the Swans were making noises about a new contract, as he nears the end of the monster nine-year deal that got him to Sydney.

Back then, it almost seemed a formality. But while it’s only been around two months since that famous night at the SCG, to me, Buddy’s future doesn’t seem as assured as it was then. In fact, now I think it’s very much a “watch this space”.

I certainly wouldn’t be rushing a decision. Given we’re only halfway through the year, what might appear like the right call now could prove the wrong one by season’s end.

There’s a number of key questions both the Swans, and Buddy, himself, will need to ask themselves over the next 12 weeks.

His body, his form and his own expectations of his output will be key components.

As reference points, in 2018, before missing significant chunks through injury in the years following, Franklin averaged three goals and more than 15 disposals a game. Last year his goalkicking average was 2.8 a game.

So far this season Franklin has a respectable 23 goals (2.6 a game) and is averaging around 12 disposals from his nine matches, which is a small regression.

That’s completely understandable given he’s now 35, but it does pose the question about what his output would be if he played on next year.

Yes, he’s still kicked a goal in every game this year and still has a few bags, including those six majors he kicked in the round seven loss to Brisbane.

But it feels like both his ceiling and his floor are lower than they used to be. When he gets a quality defender, like Jacob Weitering last weekend, he’s finding it tougher to break the shackles. 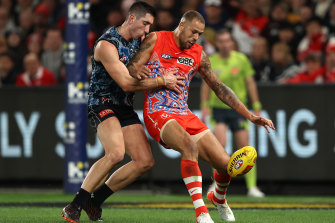 Of course, there’s still plenty of value in Buddy playing that role and taking the opposition’s best backman.

That’s no doubt been helpful in easing the pressure on his heir apparent, Logan McDonald, who, after being drafted in 2020 is still developing. But there will come a time that he needs to own that forward line.

Buddy is such a huge presence that he’s often impossible to ignore when his teammates are looking inside 50. There’s a balancing act there between getting McDonald the looks he needs, without overexposing him before he’s ready.

Maybe Franklin could do what I suggested for Jack Riewoldt a few weeks ago and spend time up on a wing. He’s versatile enough and we know how good his field kicking is.

Another factor in the decision-making around his future will be money.

With his initial deal believed to be heavily back-ended, any offer now is clearly going to be significantly less than what he is earning. I doubt at his age Buddy is playing for money, but would he accept a lot less to play on next year?

With Josh Kennedy likely retiring it would certainly allow the Swans to become bigger players at trade time, or in free agency.

I think back to when the likes of Nick Riewoldt and Brent Harvey retired though they probably had a bit more to give.

The Swans are in a different phase to the St Kilda of 2017 when Riewoldt retired, and North Melbourne in 2016 when “Boomer” hung up the boots. They would like to think they’re closer to contending.

If Buddy wants to play on – and that in itself is a question that needs answering – do the Swans load up for one last tilt with their star man?

In the NFL, a 44-year-old Tom Brady isn’t as statistically potent as other quarterbacks anymore, but he’s got playoff experience and knows how to deliver in big moments.

While the physical requirements of the two sports are different, Buddy is still incredibly dangerous on his day and, like Brady, can produce something special when the moment demands it.

He’s the player of his generation who everyone respects enormously, and I’m sure John Longmire and the Swans will treat the process respectfully and delicately.

I’m certainly not writing him off, but it will be fascinating to see how the second half of the season plays out for Buddy – starting on Friday night against Richmond.