The Waratahs have asked SANZAAR to look into a possible act of foul play from Lions second-rower Ruben Schoeman on NSW captain Rob Simmons during their 29-17 victory in Sydney on Friday night.

The incident was not picked up during the match, but a photo emerged on Saturday showing Schoeman’s fingers making contact with Simmons’ eye region.

Footage of the incident in the 23rd minute shows Schoeman trying to stop Simmons going through the middle of a maul and then touching, albeit for a short period of time, the second-rower’s eye with his middle and ring finger.

Simmons dis not appear to react to the contact and got up and continued to play. The incident occurred just after Schoeman returned to the field from an earlier scuffle with Simmons that saw him yellow carded.

In the ninth minute, Simmons and Schoeman broke away from other players and ended up on the ground, the latter pushing the NSW captain’s face with his forearm. 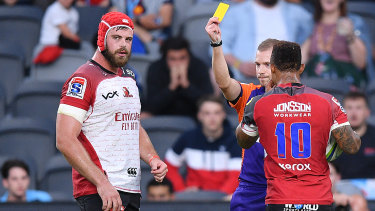 Referee Angus Gardner said the push in the face was unnecessary and sent Schoeman off for a 10-minute stint on the sidelines.

When Schoeman returned it was only a matter of minutes before the contact with Simmons' eye was made.

World Rugby laws state that "a player must not physically or verbally abuse anyone. Physical abuse includes, but is not limited to, biting, punching, contact with the eye or eye area".

It is unclear whether SANZAAR will take the matter further and while the Waratahs did not want to comment publicly when sent the photo by The Sun-Herald, officials were hopeful the incident would be looked at when footage of the match is reviewed.

The Waratahs said Simmons did not suffer any injuries as a result of the incident, however admitted the photo was not a good look for the game.

A SANZAAR spokesperson said only that “normal citing procedures will apply”.

Meanwhile, Simmons and Jake Gordon could be in doubt for next Friday's clash with the Chiefs in Wollongong, but their respective injuries appear to be less serious than first thought.

Simmons has a high ankle sprain, with the good news being that there was no sign of syndesmosis. He will rest over the weekend and continue to wear a moon boot before being assessed again at training on Monday.

As for Gordon, who left the field in the first half for precautionary measures, the club says his hamstring niggle isn't on the serious end and will be monitored at the start of the week.

The Chiefs have three wins from four starts this year and Waratahs coach Rob Penney knows they will be far trickier opponent than the Lions.

“No disrespect to the Lions, but the Chiefs are a different kettle of fish,” Penney said. “There are lots of areas that we’ll need to be more efficient in. We’re not going to be able to kick as loosely as we did. The Chiefs are very dangerous on the counter.

“They’ll build pressure, keep the ball for long periods, offload … all those dangerous things that we know will come from a team like the Chiefs. We need to hold onto the ball, be clinical and back our attack. We're going to need to lift the intensity.”