It's not yet the revival but it is proof of life. A week after the Brumbies and Reds staked a defiant claim for the Australian resistance in Super Rugby, the Waratahs and Rebels followed it up with rousing wins against the Lions and Highlanders on Friday night.

Call it a line in the sand, not to mention a grab for dignity for two teams who had to look themselves in the mirror over the past fortnight.

Relieved Waratahs players celebrate their first win of the season on Friday night.Credit:Getty

For the Waratahs especially, who overcame a sloppy second half and a woeful goalkicking performance to beat the 2018 finalists 29-17, it was a sorely needed win. The small Bankwest Stadium crowd were heartily appreciative.

"I'm just so pleased for the playing group that they've managed to bring into the arena a lot of the stuff we've been working on," coach Rob Penney said.

"Just so proud of the leadership group and the leaders within the group. They've really taken a lot of responsibility in the last 10 days or so and it's just been a real nice transition. [Captain Rob Simmons] needs to take a lot of credit for what he's done, showed real leadership credentials, which was wonderful."

Penney's bye-week "no bullshitting" directive hit the mark, as was the group's call to simplify some of their language and – critically – muscle up in defence. There was clarity and purpose in the NSW game plan and execution. With the notable caveat that the Lions look to be at the beginning of a painful rebuilding phase, the home side showed signs their attacking overhaul is beginning to bear fruit. 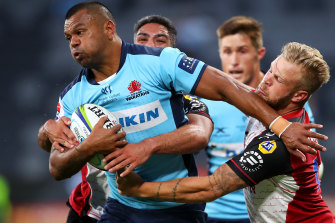 Kurtley Beale asked plenty of questions of the Lions’ defence at Bankwest Stadium.Credit:Getty

"Tonight their decision-making on attack was really good," Lions coach Ivan van Rooyen said. "Their option-taking to identify space wide, to go to that space, and they've got devastating ball carriers, big forwards and backs that can get over that advantage line. As soon as they get over that advantage line with good, quick ball and good decision-making out wide, they're a real threat."

Playmakers Will Harrison and Kurtley Beale and halfback Jake Gordon were inventive and confident in attack, and the forwards popped up everywhere, with man of the match Angus Bell, Lachlan Swinton, Jack Dempsey and Tetera Faulkner all scoring tries alongside Super Rugby debutant James Ramm.

Bell opened the scoring for the home side and Harrison converted to make it 7-0. Lions captain Elton Jantjies put the visitors on the score board with a 40-metre penalty goal in the 15th minute, but the Waratahs scored their third try two minutes later as their attack continued to gel.

Karmichael Hunt popped a pass up and over to winger Jack Maddocks, who gave it to flanker Dempsey on his outside. Harrison missed the sideline kick but the Waratahs enjoyed a 16-point buffer heading into the closing 20 minutes of the half.

Jake Gordon left the field with a hamstring strain, a loss of experience that heaped pressure on his teammates, replacement Mitch Short's inexperience telling in the rest of the half.

Not helping matters was a yellow card to blindside breakaway Lachlan Swinton, who was caught exhibiting some sloppy tackle technique on the much smaller Jantjies. Referee Angus Gardner ruled the tackle high, and there were wry laughs when, as Gardner instructed Jantjies to leave the field for a head injury assessment, the Springboks veteran pleaded "he (Swinton) hit my chest".

The Lions scored off a maul moments later, closing the gap to 19-10. Harrison missed a penalty attempt in the 30th minute but the Waratahs held the line to run into the sheds with a nine-point buffer intact.

The Junior Wallabies alumni banished any anxiety that plagued them before the bye, Bell, Harrison and Mark Nawaqanitawase playing the house down all over the park as part of a much more assertive Waratahs attack.

Nawaqanitawase left the field two minutes into the second half, replaced by youngster Ramm, and captain Rob Simmons picked up an ankle injury.

But a superb piece of counter attack saw the home side turn a defensive play inside their own 22 into a try in the opposite corner, with the ball going through no less than 10 sets of NSW hands before Ramm scored in the 57th minute.

A soft try to Marnus Schoeman closed the gap to a converted try and two missed shots at goal from Beale kept things tight in the final 10 minutes.

But a nice play down the short side off a Waratahs line out sealed the side's first, pressure-relieving win, Tetera Faulkner bowling over with four minutes left to play. Beale missed the sideline conversion to cap a poor night for the Waratahs' goalkickers. He and Harrison missed six of eight shots at goal.

Earlier on Friday the NSW women beat the Brumbies 41-8 in round three of Super W. The two-time title winners scored seven tries, with Grace Hamilton and Maya Stewart both scoring doubles at Bankwest Stadium.

Related posts:
Previous Post: ‘That kid that gets everything’: Bogut lays in to cashed-up rivals
Next Post: LA Lakers win seventh game in a row with LeBron James sidelined