The Wallabies’ winning streak is over after Scotland orchestrated a come-from-behind 15-13 victory on a dramatic afternoon at Murrayfield.

Scotland made it three straight victories over a Wallabies side denied points on multiple occasions due to ill-discipline and inaccuracy, which included a yellow card to Allan Alaalatoa in the 37th minute.

Australia led 10-7 in the 59th minute before replacement Scottish hooker Ewan Ashman put the home side ahead 12-10 thanks to a fantastic diving finish on the left wing.

James O’Connor got Australia back in the lead with a penalty before Finn Russell wrestled back the lead with 11 minutes to go in a forwards dominated match.

A tense final period ensued, but the Wallabies were unable to make it six wins on the trot heading into next weekend’s huge match against England.

“Coming down to the wire it’s always tough,” said Wallabies captain Michael Hooper. “We had a couple of chances there. We were leading with 10 to go. We had a sniff of it, but Scotland did really well to grind that one out.

“Discipline killed us a bit. We let Scotland get into our end a little easy. That was tricky.

“I don’t think we executed our game plan well. We’re really frustrated to not keep our momentum going and be stifled by Scotland there today, but we’ll grow from that.”

Australia’s frustrations boiled over just before half-time when Michael Hooper’s try under the sticks was taken away because of a yellow card dished out to Alaalatoa.

Referee Romain Poite and the TMO believed Alaalatoa made contact to the face of Zander Fagerson while making a cleanout. Although it was a glancing blow, there was contact to the head and the try did not stand. 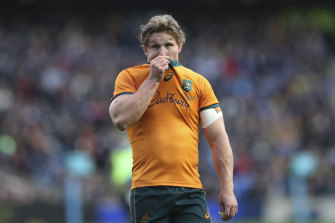 Former Wallaby Morgan Turinui said on Stan Sport that it was “poor tackle technique” from Alaalatoa, while All Blacks legend Andrew Mehrtens described the incident as “clumsy and inaccurate”.

However, Hooper was livid and in a rare outburst, he told Poite he disagreed.

“You can’t be serious,” Hooper told Poite. “I can’t believe that. That is a weak decision. He didn’t do anything.”

Australia only trailed 7-3 at the break, but things went from back to worse when Jordan Petaia left the field just before half-time with a hamstring injury.

Petaia’s devastation at suffering another injury was juxtaposed to Izaia Perese’s delight as he ran onto the field for a Test debut years in the making.

There was more drama for the Wallabies when Taniela Tupou was concussed. With Alaalatoa still off the field, James Slipper was forced to shift to the tight-head side.

Australia held strong at the following scrum before Perese bent the line with his first touch that gave Australia forward momentum and a much-needed try moments later to Rob Leota.

Alaalatoa was forced off in the 55th minute with a head knock, but he returned nine minutes later. It would have been a major sigh of relief given Tupou’s earlier knock.

Returning second-rower Rory Arnold took little time to make his presence felt by charging down a Scotland kick and got better as the game went on, while Will Skelton was a calming influence late in the match despite the result not going Australia’s way.

The Wallabies had major scrum issues that will need addressing before the England fixture, while O’Connor didn’t have a huge impact on the game in his first match at No.10 this year.

O’Connor missed an early penalty that could have been the difference.

Australia struggled for territory and meaningful possession in an error-riddled first 15 minutes.

The Wallabies’ frustrations were summed up in the 18th minute. Having forced a five-metre lineout thanks to a great counter-attack kick from O’Connor, the Wallabies won the scrum but gave away a penalty courtesy of Hunter Paisami for an extra roll. 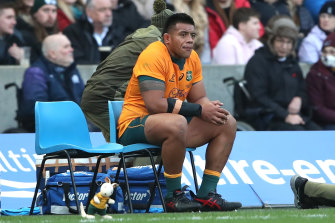 Scotland had opportunities to take three points but rolled the dice in search of a try and were rewarded in the 22nd minute when Hamish Watson dived over from a beautiful executed rolling maul.

Hooper was extremely active at the breakdown, winning a number of critical penalties for his team, but it was in vain.

Paisami might want to avoid coach Dave Rennie for the next few days. The Wallabies thought they had their first try of the afternoon down the left edge when Tom Wright crossed the line, but Paisami was penalised for tackling Russell beyond the breakdown.

In the 52nd minute, however, Paisami pulled off a brilliant pressure-relieving breakdown penalty after Wright was penalised for a needless push-and-shove with Stuart Hogg.

The Wallabies searched for a match-winning try, but lacked cohesion in a tense tussle against a Scotland side playing with passion in front of 67,000 fans at Murrayfield.