The Wallabies have added a new touch of Indigenous heritage to their jersey on a full-time basis.

Sunday’s match against the world No.1 Springboks on the Gold Coast will mark the first time the Australian national team wears a jersey featuring a First Nations design in the playing number.

The Wallabies have added a new touch of First Nations heritage to the back of their primary jersey. Credit:Rugby Australia/Andrew Phan

Rugby Australia, who announced the design change on Wednesday, says it is the first time an Australian representative team will “bear both the coat of arms and a First Nations design in its primary playing strip”.

The Wallabies have two jerseys: their main gold strip, which will now have the new-look number on the back, plus the separate First Nations jersey the team has worn a number of times in recent years.

Earlier this year a number of Australian rugby’s most prominent figures voted on a colour change for the main jersey. The team’s gold jersey is now the same shade as that worn by the 1991 World Cup-winning Wallabies team. 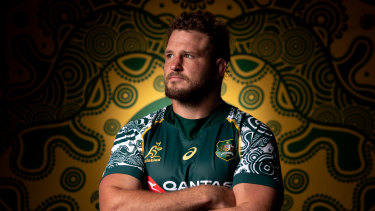 James Slipper poses for a photo in 2020 in Australia’s First Nations jersey. Credit:Getty

Australia will wear their distinct First Nations jersey for the first time this year against Argentina in Townsville on September 25.

Last year Wallabies coach Dave Rennie said the group was keen for an Indigenous element to be incorporated permanently into the jersey.

They now have their wish.

“This jersey holds significance to every member of our team and to have the First Nations artwork now on our primary jersey is something incredibly special,” Rennie said. 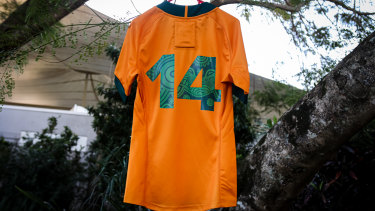 “It was the players who had been advocating for the idea of a permanent First Nations addition and I’m pleased we’ve been able to come up with a solution.

“We place a great deal of thought as to when and where we will wear it and Townsville is an obvious choice. It boasts a strong First Nations community who we represent and when we wear this jersey we feel it will provide us with an even stronger connection with our people.

“As a squad, we pride ourselves on culture and inclusivity and that’s what the First Nations jersey represents. To now have it on both jerseys is something special for our rugby community.”

Australia first wore their First Nations jersey in 2017 when they beat the All Blacks at Suncorp Stadium.

They have also worn it against England at Twickenham in 2018, against Uruguay at the 2019 Rugby World Cup and most recently against New Zealand and Argentina in Sydney last year.

After three losses on the trot against New Zealand, the Wallabies face another tough opponent in South Africa at Cbus Super Stadium on Sunday.

The team play the world champions twice in consecutive weekends, before two Tests against Argentina on September 25 and October 2.