Josh Navidi once turned All Blacks heads and has now been backed to leave England blue at Twickenham.

The 29-year-old is back in the Wales team, replacing the previously undroppable Taulupe Faletau at No 8, for his first match since January.

Navidi had hamstring trouble but is now fit to start, as is Liam Williams who as Sportsmail reported on Thursday is thrown straight into the team after a four-month injury lay-off.

And Wales boss Wayne Pivac reckons both are ready to shine.

‘Josh Navidi is a fantastic player over the ball,’ said Pivac ‘It’s the breakdown work that he does, his defensive work and ball-carrying too.

‘When he played for Wales against New Zealand Steve Hansen asked who he was because so impressed with him.

‘He is a tough character and is someone that puts a lot of pressure on the opposition.

‘If you look at the Six Nations match last year he played a massive role in that win for Wales and he plays well in big games.

‘He’s stood up and played in some very big matches for us so we’re confident he can do that again.’

And on Williams’ return, his first match since the World Cup quarter-final in Japan last year, Pivac added: ‘He’s at a level where we think he’s safe to play. He is very experienced and knows his body as well as anyone.

‘We’re confident he can do a job for us.’ Pivac made significant changes to his starting team, with Rob Evans in for Wyn Jones, Faletau dropped to the bench for Navidi and Tomos Williams in ahead of Gareth Davies. On the bench Rhys Carré, Aaron Shingler and Rhys Webb are in.

Pivac said Faletau had not been able to train until on Thursday after picking up a knock for Bath last weekend. 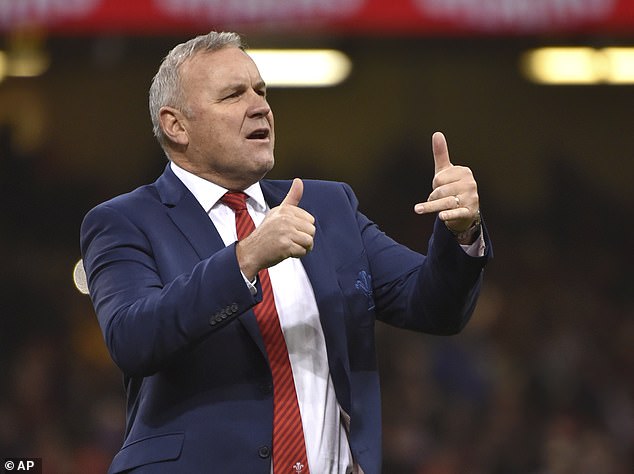 Wales were insistent that Dan Biggar, who hyper-extended his knee for Northampton on Saturday, is ready to play.

‘He ran yesterday and he’ll run in the captain’s run,’ said Pivac.

If Biggar plays it would be a rapid turnaround for the No 10, and if he does not then Jarrod Evans, 23, will be parachuted in as the most inexperienced Welsh fly-half to start at Twickenham since Iestyn Harris in 2002.

Dragons playmaker Sam Davies is travelling with the squad as a precautionary measure.

Warren Gatland never lost three Six Nations matches in a row with Wales, and Pivac is keen to avoid that fate against England – and he has seen a raising of the temperature this week with the old enemy on the horizon.

‘You’ve only got to listen to Alun Wyn Jones during the week,’ he said.

‘The intensity is there in his voice and everything he’s done in training. He’s led from the front.

‘The level of intensity has noticeably gone up in training, certainly in the live stuff and it has been no holds barred.

‘No one has been holding back. That tells me a big performance is coming.’