Two weeks before the start of The Rugby Championship, the conversations about who will win this year’s tournament have been … well, there haven’t been any.

It’s true there have been a million other storylines to occupy us, from the Piddler on the Roof, to Traitor Gate and the All Blacks’ implosion, but if we are honest the southern hemisphere series hasn’t exactly grabbed us for years.

Rugby bosses have tried to spice things up this year with the addition of mini tours, but that has only accentuated the fact that interest in the competition itself isn’t close to where it should be.

It needs to be reinvented, and I would no longer baulk if the suite of improvements included shifting it to earlier in the year to line it up with the Six Nations. But we need to work backwards to get to that point.

The Rugby Championship has a number of issues, including the impossibility of the ‘away day’ supporters that make the Six Nations so special. It’s easier to get from London to Dublin than it is from Sydney to Mendoza.

However, the fundamental issue with the current format is that it lacks the natural tension of the Six Nations, where teams play each other once. When the Wallabies play Argentina, on Sunday week (AEST), there will be the underlying sense of, ‘we’ll get another crack at them next week anyway’.

The Wallabies face Argentina in a fortnight safe in the knowledge they have another crack at the Pumas the following week.Credit:Getty

The build-up to that Test will also be dominated by the Michael Cheika storyline, and there will be very little focus on the Wallabies’ need to win that Test to get off to a fast start to win The Rugby Championship.

When teams play each other twice, it is difficult for those fixtures to have any relevance to the championship table. There is no tension, and the tournament winners are invariably crowned without much fanfare.

The four team, double-fixture format isn’t working, but a six-team, single-fixture might. And here is where we come to the difficult area of expansion – and specifically Japan and Fiji.

Forget the high-performance aspect of their inclusion for a moment (and Fiji were desperately disappointing in the Pacific Nations Cup, but more on that later) because any decision will also come down to money. 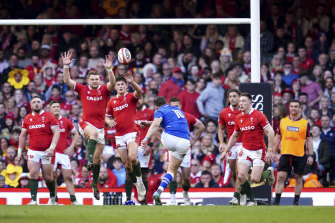 The Rugby Championship, by virtue of geography, cannot compete with the fan experience of Europe’s Six Nations but there are other ways to revive the tournament.Credit:PA

And, in particular, broadcast money, although that complex subject is perhaps one of the least understood areas of the game at present.

While there has been a lot of talk about the Rugby Australia broadcast deal with Nine/Stan being worth $33 million a year and the NZ Rugby’s deal with Sky being valued at $89m a year – it’s a simplification to then ask why those amounts simply aren’t pooled and split between the pair.

A well-placed source broke down TV deals to the Herald, explaining them as thus: each part of a union’s TV broadcast offering is given a value, and that number is ultimately set by the broadcaster. For example, in the New Zealand context, a value will be given to the July Tests, and another value will be given to the NPC, as well as Super Rugby Pacific and The Rugby Championship.

In other words, some of the value of the NZR-Sky deal has nothing to do with Australian rugby.

Would Japan and Fiji bring enough to the table? That’s arguable. Yet it is my belief that they must be included.

That said, there is no doubt that NZR is currently sitting on the broadcast pot of gold, contributing significantly more than South Africa and Australia into The Rugby Championship (by multiples of up to two and three, respectively).

Herein lies the issue with Rugby Championship expansion. Would Japan and Fiji bring enough to the table to make sure that the existing cut enjoyed by the SANZAAR partners isn’t diluted? That’s arguable, and may explain why there hasn’t exactly been a headlong rush to get those two sides involved. When is the last time you heard anyone banging the drum on their behalf?

Yet, it is my belief that they must be included, even if it is post-2025 after a few more years of quality fixtures against the so-called developed rugby nations.

That would create a six-team competition, effectively to mirror the Six Nations. One game against each side every year: genuine meaning riding on every game within that competition.

And would I shift it to February-March in line with the Six Nations? Not out of preference, but that conversation is absolutely worth having, particularly if that’s the carrot that keeps our South African friends within the competition. Their players now play in the northern hemisphere, so it would work for them, and it would also work for our Fijian friends, whose best players still play for French clubs (part of their reason for their Pacific Nations Cup underperformance).

It’s radical, yes, but the time for rugby to think ‘traditionally’ is long gone. The Rugby Championship isn’t working, so fix it.