Having come through a transition period as a player where the game exploded from semi-professional to the full-time job it is today, I’ve seen considerable change.

The AFL Players Association, or AFLPA, underwent a similar transformation in that time, from a small union that some teams didn’t even bother signing up to, to the much larger, all-encompassing organisation it is today.

When Andrew Demetriou took over as chief executive in 1998 – using all of the ruthlessness he did as AFL boss – the AFLPA became a real force. Conditions improved significantly for the players, and it seemed like we had a level of respect from the league when it came to issues in the game.

Since then, there have certainly been positives for the players, whether through improved collective bargaining agreements and wages, or important milestones such as free agency. Those mechanisms have given the players much greater power to take charge of their futures.

But I can’t help but think the players’ association has become a toothless tiger and lost its bite – that willingness to take on the AFL and stand up for its members.

It seems to be a common theme whenever a new CBA is being negotiated that the AFLPA almost becomes silent on other issues. Is that timid approach simply to avoid getting offside with the AFL?

I just don’t think the AFLPA is serving the players the way it was originally designed to do, and I believe that for a few reasons.

Not for a second am I blaming the president. Patrick Dangerfield is asked to take on enormous public responsibility as the face and voice of the organisation. But he shouldn’t have to do that.

As someone who’s still playing, it puts him in an incredibly tough position when it comes to discussing football issues. He’s hamstrung in what he can and can’t say and how hard he can push, but for some reason Dangerfield seems to be the only voice we hear from the AFLPA.

That responsibility should fall more often to CEO Paul Marsh. About the only times I can remember hearing from him recently have been to condemn issues of racism. 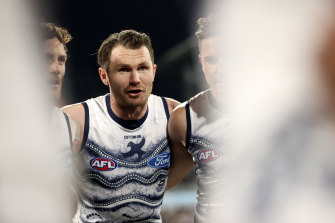 That is, no doubt, really important for the players’ union to do, but it should not be the only occasion we hear from what should be a very powerful organisation.

Without having a real voice, they’ve also been losing the PR battle when it comes to player pay, particularly during COVID-19 times. The players have been painted as greedy and haven’t pushed back on that well enough. Stand up for the players.

The AFLPA should have a better relationship with the AFL so there’s more transparency about where the game’s money is being spent. What impact is that money really having on grassroots footy, for instance? Because right now, it seems everywhere I go at country and suburban level they’re struggling.

Then there’s the issue of the support the union is providing past players. I’ve spoken with numerous players in recent weeks who feel let down by the system. Either their issues have slipped through the cracks or they have been ignored completely. Others might get a response initially, but as people come and go from the PA, so does the support. A change in personnel has sometimes meant the rug is pulled from underneath them when the AFLPA suddenly has other priorities.

I know Nick Riewoldt was quite outspoken when he criticised the players’ association over its support – or lack of it – for Sam Fisher once he left the footy bubble.

The AFLPA can’t be there with you every step of the way post-football, but right now it seems they’re not there consistently enough.

My understanding of the Ty Zantuck situation is that he was initially promised support, but beyond a certain point he felt was on his own.

This week the former Richmond player won his Supreme Court bid to sue the club for compensation over back and brain injuries.

It could open the door for others to follow suit, and from what I understand concussion – and other serious injuries – could explode into a huge financial issue for many stakeholders.

Again, it seems the AFLPA hasn’t taken the AFL to task.

And what of the AFLPA’s insurance policy? Clearly the money for that type of insurance has to come from somewhere, but the current policy seems vastly inadequate. Players receive around $5000 of cover post-career, and for guys who have played 100, 200 or 300 games-plus it covers little more than a visit to a specialist. It’s simply not enough.

Any player who’s played for that length of time is going to have some kind of trauma. But there are players who have much more significant long-term injuries than others and that blanket policy doesn’t work for them.

While footy has given many players a great living and wonderful opportunities, there’s still so much more living to be done after their careers are finished. Even if you’ve had a great career, you’re still retiring between 30 and 35 and if you’re carrying a significant injury, it can affect you for the rest of your working life.

I’ve canvassed a large number of former players with a simple question: what do you think of the players’ association?

The most common answers: “weak” and “ineffective”. That must change.