Milestone man Nathan Jones has declared his Demons are a better version of their 2018 selves and have only just started to “scratch the surface” in their quest to end a premiership drought that has lasted almost six decades.

The Demons made it to a preliminary final in 2018, beating Geelong and Hawthorn in their opening two finals before losing to the Eagles in Perth.

That excitement dissipated in 2019 (17th), with more disappointment last season (ninth), but the Demons now have the chance to be one of the league’s elite teams.

Nathan Jones with his wife Jerri and children Bobby and Remi ahead of his 300th game this weekend.Credit:Getty Images

“I have never got excited as everyone else about ’18. I feel like we got on a run late in the season. Ultimately, the core of the group is pretty similar,” Jones said.

“What you see now is a reflection of a group that is more mature and understands what it takes. Back in ’18, we were being heavily criticised midway through the season that we hadn’t really beaten anyone. A run of six or eight games got us into finals and then winning finals. This year is different.”

Jones, 33, will join club great David Neitz (306) as the only Demon to have broken through the 300-game barrier when he lines up against Richmond in an Anzac Eve blockbuster at the MCG on Saturday night.

But what he craves is more finals exposure, having stepped out in September on only five occasions.

“I want to see this group to continue to grow and get better and I feel we are only scratching the surface of where we could potentially go. Ultimately, that’s why I am playing,” he said on Monday, acknowledging the lure of finishing his career in the manner of Hawks great Shane Crawford, who retired after winning a grand final in 2008.

“I have probably been dreaming of that my whole career really. People say: ‘Why did you stick around through difficult times?’ That dream was the thing that probably kept me alive really.

“We got a taste of it back in ’18. I have been pretty bullish about it [playing finals] most years but, in particular, leading into this season, I felt if we got a few things right over summer, the club was really honest with itself, both from a coaching point of view and playing point of view … here we are.”

Jones debuted in 2006 under coach Neale Daniher and has had seven coaches since, including three interims (Mark Riley, Todd Viney and Neil Craig), highlighting how particularly fraught his opening eight seasons were, before Paul Roos settled the club and Simon Goodwin helped to deliver the breakthrough finals run in 2018. 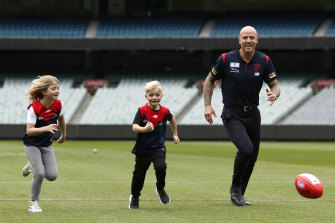 Jones plays with his children at the MCG.Credit:Getty Images

It wouldn’t be a milestone press conference without Jones being asked about those dark years from 2007-13. As the then captain who often fronted the media after stinging defeats and sackings, Jones, who listed resilience as one of his best traits, was succinct in his memories.

“I never really considered leaving, but those years sucked. When you get drafted, I was lucky to play finals first year but … then we finished second-bottom a year after, a handful of wooden spoons after that and not many wins,” he said.

Having signed a one-year extension in 2020 after “honest, up-front discussions”, leading to a feverish off-season training program for Jones by fitness guru Darren Burgess, better days are here.

Buoyed by their first 5-0 start since 1994, the Demons now face a true examination of their improvement when they face the modern juggernaut that is Richmond.

There is selection pressure at the Demons, after Sam Weideman booted seven goals and Ben Brown added three for the Casey Scorpions against Box Hill on Sunday. Both have had injury issues over the pre-season but the Demons have said they are now fit for AFL selection. However, Tom McDonald, Mitch Brown and Luke Jackson have been in good form.

Keep up to date with the best AFL coverage in the country. Sign up here to our Real Footy newsletter delivered to your inbox on Mondays and Fridays.