Springboks No.10 Handre Pollard has suggested a ‘street smart’ Wallabies team were guilty of illegal off-the-ball tactics that weren’t picked up by referees in Saturday’s match at Suncorp Stadium.

Australia celebrated a 30-17 win over the Springboks, just six days after a 28-26 victory against the world champions, who have now lost their No.1 world ranking.

South Africa have to pick themselves up after consecutive losses for the first time in almost three years ahead of an historic clash against the All Blacks in Townsville on Saturday. It will be the 100th Test match between the fierce rivals.

Australia scored four tries to one in the team’s most complete performance since 2019 but Pollard, who kicked four penalties in the match, has stirred the pot by hinting the Wallabies were up to no good off the ball.

Pollard, like his captain and coach, said Australia deserved to win the match but qualified the praise by publicly airing what he felt were questionable tactics.

“They are very street smart,” Pollard said. “They definitely train it and the referees don’t see everything. If [referees] pick it up now and then, great. We do prep the refs on that as well.

“It’s very difficult to see a lot of stuff off the ball with the refs focusing on the ball and breakdown. They’re good at it. They do it very well and they get away with it 90 per cent of the time.

“We don’t do that. We don’t coach that and we don’t play the game that way but it’s not a problem if they want to do it. We should handle it.”

Pollard didn’t specify what the Wallabies’ tactics were but given the Springboks’ gameplan revolves around box-kicking, it is likely he was pointing to retreating Australian players putting themselves between the chaser and the Wallabies’ catcher.

It is legal unless a defender changes his line to impede a chaser. Wallabies second-rower Matt Philip was penalised in the first minute for a ‘deliberate shoulder barge’ while changing his line to block South Africa’s Eben Etzebeth who was running through to try and retain possession from a high kick.

However, Springboks halfback Faf de Klerk was shown a yellow card in the 13th minute for a professional foul when Australia had a penalty advantage.

The Wallabies lost the penalty count 17-10.

Pollard’s comments come after South African director of rugby Rassie Erasmus posted an hour-long video after the first British and Irish Lions Test complaining about the standard of officiating.

South Africa lost the opening Test 22-17, prompting Erasmus to hit out at Australian referee Nic Berry and complain about a number of decisions in a remarkable video posted online that later sparked a World Rugby investigation. 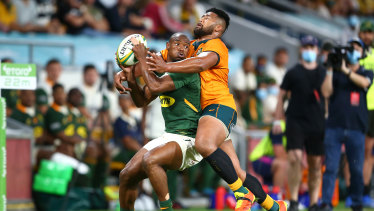 “As a highly regarded and respected international referee appointed by World Rugby, the attack on Nic’s integrity, character and reputation is unacceptable,” Marinos said.

The Springboks went on to win the series against the British and Irish Lions but have crashed back to earth following two losses to the Wallabies.

New Zealand, now atop the world rankings, have won their last nine Tests. A win against the Springboks would see them crowned Rugby Championship winners.

“We know that we need to do better but we don’t have a lot of time to reset for the game,” Pollard said. “We are never short on motivation when it comes to playing the All Blacks and that applies for every Test match for that matter.”

Australia face Argentina on Saturday in Townsville, a side they drew with twice in 2020.

Stan Sport is the only place to watch every match of the The Rugby Championship continuing this Saturday with the All Blacks v South Africa followed by the Wallabies v Argentina – both matches streaming live, extended and ad-free on Stan Sport from 4:45pm AEST.

Related posts:
Previous Post: Brentford are already demonstrating a canny edge in the Premier League
Next Post: The referees will always be in crisis — but let’s stop moaning about them