The little kid with no front teeth holding up the trophy below is Keaon Koloamatangi. He was seven. It was his first time pulling on the South Sydney jersey.

The little bloke to his right, with the big front teeth, is Cameron Murray.

“We’d just won the Tommy Bishop Shield down at Shark Park,” Koloamatangi recalls. “It was the first time I pulled on the Rabbitohs colours. We played for the Mascot Jets, but we were representing Souths. I scored a few tries. So did Cameron.

“You never forget the first time you pull on the jersey of an NRL team. It was so cool.

“I remember the trophy being big and heavy. It was certainly the biggest one I had won. It certainly wasn’t the last.”

Koloamatangi and Murray are now just 80 minutes away from reaching an NRL grand final and giving themselves the chance to walk away with the game’s most prized silverware.

The 23-year-old Koloamatangi and Murray have been winners all their life. In fact, they won 10 straight premierships with Mascot.

They didn’t lose a game until they were midway through their teens, and then only because Koloamatangi, Murray and a few others were unavailable to play for Mascot some weeks because of a clash with junior representative commitments with the Bunnies.

Koloamatangi was also a gun swimmer, attending national titles in Brisbane and Adelaide where Olympic gold medallist Kyle Chalmers was the star in his age group. His mother, Nicole, remains a swim teacher at a prestigious Sydney private girls school.

Had Koloamatangi put a little more time in the pool, who knows how far he could have progressed in the water?

Being of Tongan descent with a solid build, Koloamatangi quipped he was always easy to spot on the pool deck, “because most of the others were lean and tall, and I was the chubby kid”.

The silverware didn’t stop there either. Koloamatangi cleaned up in surf lifesaving, being crowned state champions in the beach sprint relay alongside Murray.

Yes, Souths have a couple of beach sprint champions other than Damien Cook. 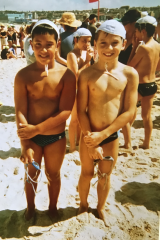 “Nobody believes me when I tell them I was also a beach sprint champion,” Koloamatangi says, referencing a grainy image of him and Murray standing outside South Maroubra Surf Club, “maybe this photo will change their minds.”

So by now it’s clear Koloamatangi enjoyed amazing success as a kid. Most of the trophies are gathering dust somewhere in the garage of his Croydon Park family home.

Koloamatangi said when he came into first grade, it took him some time to adjust to the concept of losing.

Fortunately for him, Souths have won their fair share of games this season, and Koloamatangi has played a key role in that run. He was one of the many standouts in the qualifying final win over Penrith last weekend.

Koloamatangi has made the left-edge back row spot his own in 2021. He is big, agile and impossible to miss with his funky mullet.

The hair has made him easy to identify on the Gold Coast in recent months. Plenty of locals have pulled him up to say hello.

“There are plenty of mullets up here, but I’m one of the few islanders,” Koloamatangi says.

Wayne Bennett isn’t such a fan of the hair, but he’s a huge fan of Koloamatangi’s talent.

“He turned the corner two years ago,” Bennett says. “It’s called growing up. I remember I got up him for being lazy. He’s always had the ability. Sam Burgess said to me, ‘Persevere with this kid because he’s going to be good’. I told him, ‘I can see that’. He just needed a bit of tough love.”

All the junior success may have led to some complacency. Koloamatangi often struggled with his weight. A few years ago while playing reserve grade, he ballooned to 124 kilograms.

Part of it can be blamed on genetics. His father, Izzy, is 145 kilograms. Izzy grew up in Newtown, but played in the Souths competition for Waterloo, Zetland, Matraville and La Perouse. 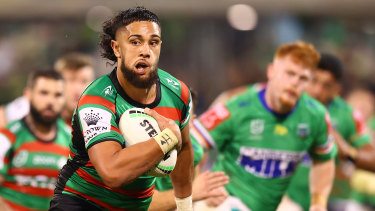 The Souths back-rower has been outstanding this year.Credit:Getty

He despised Mascot because they used to win everything. But as soon as his son was old enough, Izzy sent him to the very club he hated because he wanted him to be part of their success.

Izzy, a youth worker, would now love an excuse to increase the size of the family trophy cabinet. For as long as Izzy can remember, his boy always had a football in his hands.

“He’d fall asleep on the lounge with a ball in his hands,” Izzy says. “He was a big Canterbury fan and loved Sonny Bill Williams. Before every game he’d get the same haircut as Sonny, and even draw his tattoo on his arm.

“When he played against him last year he got the biggest shock of his life. He was so nervous. He didn’t know what to say.”

Koloamatangi praised former coach Shane Millard for giving him confidence. However, Bennett is the man who took him to the next level and he cannot speak highly enough of the supercoach.

So much so that Koloamatangi was part of the NSW Blues extended squad this year, where he got to watch the best in the game, how they went about life and rugby league, and how much further he needed to go before realising his own Origin dream.

Before that, however, Manly await on Friday night.

Lining up opposite Koloamatangi will be another Tongan wrecking ball, Haumole Olakau’atu. Talk about a heavyweight battle. The pair have met a few times in the lower grades.

Koloamatangi has already been identified by Tongan coach Kristian Woolf, who wants him on board for next year’s World Cup.

But back to Manly. Koloamatangi knows what a wonderful opportunity awaits.

“When you start out you dream of playing in the NRL, not really winning grand finals,” he says. “But that dream has changed now. Everything needs to fall into place. I’ve won trophies but an NRL premiership is the hardest to win. We’re all brothers here, we love each other and would die for each other on the field.”

Forget 10 in a row, there’s only one title that matters now.