The race for the top eight is hotter than ever as we head into the final month of the AFL home-and away season.

Collingwood, led by Jamie Elliott’s heroics, and Geelong are surging but Melbourne and Richmond have stumbled. Fremantle are in the mix but have lost Nat Fyfe, while Carlton have regained their groove. Could the Blues and Magpies meet in the opening week of the finals? The Western Bulldogs had been shaping as the great disappointment but victory over the Demons has revived their campaign.

Essendon and Greater Western Sydney made the finals last season with 11 wins each (the Giants also had a draw) but a minimum of 12, possibly 13 wins, appear required in a tight 2022 campaign.

So, where does your team sit in the premiership race? Can your team make the finals? We analyse the run home for each of the contenders, complete with round-by-round predictions and our final ladder.

We say: The Cats are hot – nine-straight wins has this team primed for a breakthrough flag. They have refined their game plan, now boasting an up-tempo gear when required, and their stars have been well-managed. The emerging Tom Atkins was a force against the Power on Saturday – and they still have Tom Stewart to return. Having toppled the Blues and Power over the past fortnight, there is no reason why they cannot be undefeated over the final four rounds.

The Cats have not missed a beat and will only get better when Tom Stewart returns from suspension.Credit:Getty Images

We say: They have a difficult run home, facing four likely finalists, and the unexpected reality they could slip outside the top four if they cannot regain their blue-chip form. We still back them to finish in the top four – the clash against the Magpies will be pivotal – but they are not the dominant side many expected. Jake Lever’s absence against the Bulldogs hurt but they still boast a midfield the envy of most teams.

We say: The Lions are a legitimate premiership threat – provided they can stay healthy. COVID-19 chaos had threatened their campaign but they have won their past two matches. We’ll back the Tigers in this week – but only just as their season is on the line – before major tests against Carlton and Melbourne. These Lions have a tougher edge, with the loss to the Bombers their only defeat at home this year. Much depends on whether Joe Daniher can return to his best form. 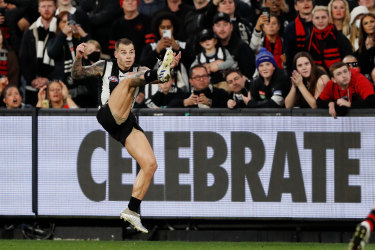 We say: The Magpies are one of the more remarkable stories of recent years, and have booked a finals berth. On a nine-game winning streak, and have fought back from seeming defeat in several matches. There is no reason not to think they won’t edge the Power this week but three major challenges then await. The Demons are desperate to build momentum, the Swans are proving the real deal and the Blues, with Harry McKay and Charlie Curnow, could stretch the Magpies’ defence. That final game could decide a top-four berth. 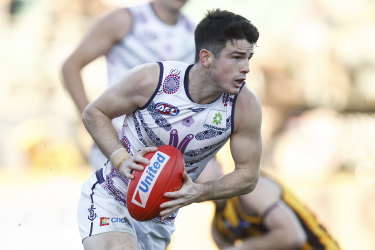 Midfielder Andrew Brayshaw has been instrumental in the Dockers’ rise this season.Credit:AFL Photos

We say: The Dockers had appeared destined for the double chance but a loss to the Swans and a draw with the Tigers has put that plan in peril. This week’s clash against the Demons could ultimately be season-defining, for both teams have been flag favourites but now face the prospect of missing the top four. The Dockers boast a stingy defence and a strong midfield but again have Nat Fyfe sidelined for several weeks.

We say: Heading into round 17, the Swans were stumbling, going 4-5 in their previous nine games, but they have since awakened, winning their past three, including the major scalps of the Western Bulldogs and Fremantle. A top-four finish had seemingly slipped by, but they are now firmly in the hunt for the double chance, for the Giants and Kangaroos await over the next fortnight. 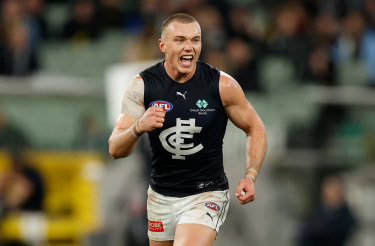 Patrick Cripps is on the verge of having his first taste of finals football.Credit:AFL Photos

We say: The Blues failed their test against Geelong but did what was required against the Giants on Sunday, meaning one more win will ensure their first finals appearance since 2013. This will be a major relief for Patrick Cripps, who was taken in the national draft just months later. The Blues must take care of business against the 16th-placed Crows on Saturday, with potentially rugged three weeks ahead. At least two wins from those three games, however, could have the Blues finish in the top four. 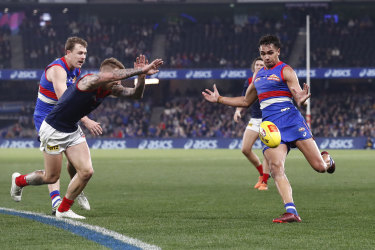 Former No.1 draft pick Jamarra Ugle-Hagan had a break-out night with a career-high five goals against Melbourne.Credit:Getty Images

We say: We had stated the Bulldogs were one of the season’s great disappointments when they slipped to tenth but stirring wins over St Kilda and Melbourne have Luke Beveridge’s men in the top eight and re-emerging as a real threat, particularly if the tall forward line of Aaron Naughton, Josh Bruce and Jamarra Ugle-Hagan can function well. If the Bulldogs are to keep the Tigers and Saints at bay, they may need as many as three wins over the final month. The Cats could be mission impossible on Saturday, but the Dockers are there for the taking.

We say: The Saints continue to tease, so who knows what’s around the corner? The loss to the Bulldogs a fortnight ago stung, and had supporters wondering if recontracting Brett Ratten had been the right call, but they showed fortitude in toppling the Eagles in Perth – their second win out west this season. They must defeat Hawthorn and will need at least two wins from their final three weeks to be alive in September. 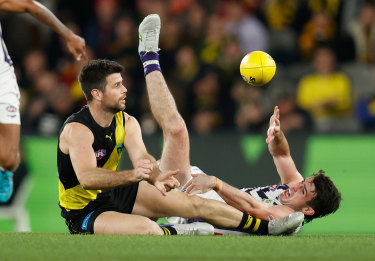 Trent Cotchin and the Tigers are scrapping to remain in touch with the top eight.Credit:Getty Images

We say: They suddenly appear wobbly, suffering from what Damien Hardwick described as “Richmond killing Richmond” after successive defeats to the Gold Coast Suns and North Melbourne. The draw with the Dockers could work in their favour – or prove another hindrance. We’ll back them in against the Lions but, if they lose, they will need to win their remaining three games to have a chance at a fourth flag in six years.

We say: That the Power had been in the finals mix come this stage of the season was a feat in itself, given a 0-5 start, but back-to-back defeats, the latest to the Cats, have all but their ended their campaign. They will need to win all four games and rely on other results going their way in what may be coach Ken Hinkley’s final year at Alberton.

We say: Have been unable to maintain the momentum from their stunning, last-gasp win over Richmond. They needed to make a stand in Melbourne against the Bombers and failed, and the Lions proved too big and strong at the Gabba. Will need to win their final four matches and rely on other results going their way. Regardless, it’s been a successful season for coach Stuart Dew, who saved his job.

The final word: Our top-eight prediction after round 17