In hindsight, it probably wasn’t the best place for the NSW coach to sit for a State of Origin decider at Suncorp Stadium.

Queensland had shaken off its COVID blues. The stadium was full, the largest gathering at a sporting event in the world since the pandemic took hold. The inmates were officially in charge of the asylum.

The venue on this day is the Ms.Cattea Tea Bar on Darlinghurst Road, Potts Point, which is equidistant from traditional rugby league haunts The Bourbon and Empire Hotel. We are drinking green tea – picked from a mountainous region of the Anhui province in China – from long, clear glasses.

The game really has changed forever.

Can Fittler flip the result from last November when wily old Wayne Bennett took control of an injury-hit Queensland team and clung to a throwaway line about it being “the worst Maroons side in history”?

Having won the first match in Adelaide, Queensland turned around a 34-10 loss in game two in Sydney to win the decider 20-14 in Brisbane.

Sure, NSW had plenty go against them. They lost captain Boyd Cordner to concussion in game one, then stand-in captain James Tedesco also to concussion early in game three, but the Maroons were thin on experience. It was a Bennett masterclass.

The green tea is sliding down smoothly but the conversation turns slightly bitter with this question: did the 71-year-old supercoach out-coach you?

“At the end of the day, he did,” Fittler concedes. “The way he dealt with their big defeat in game two and turned it around … So you’re right: Bennett had them in a really good state. Coaching is winning and losing. We lost and I didn’t handle a lot of things well. The easiest thing is to bring it back to yourself, which I’ve done.”

Fittler won’t elaborate on exactly what he got it wrong but hints enough about pulling the wrong rein on team selections, which means he is agonising over the make-up of the team for game one for this series. 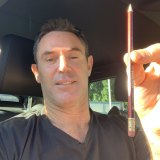 Brad Fittler ‘pencils in’ his NSW Blues team for Origin 1 from his car.

That’s why he’s using a pencil and eraser instead of a pen when picking his side. He texted through a picture late on Friday to prove his point.

The shortage of back-rowers on the left edge, fitness concerns about Souths lock Cameron Murray, and a knee injury Broncos prop Payne Haas suffered on Friday night against the Storm, means the pencil has been working overtime.

Incumbent hooker Damien Cook appears to have nudged ahead of Penrith’s Api Koroisau, although it doesn’t necessarily seem a lock when Fittler says this: “He’s at a really interesting stage of his career”.

Both will be in the 17 but who starts? The feeling late Friday was Luai was likely to start alongside Penrith teammate Nathan Cleary with Wighton coming off the bench because he can fill various positions.

“That’s the one we just have to nail, without a doubt,” he says. “Nathan’s doing a really good job just playing as a halfback. It’s crucial in terms of both attack and defence that we take pressure off him. We have to get that right.”

With Penrith playing so well, there must be a tendency for Fittler to cherry-pick liberally from their side.

There’s been a whiff of Panthers bias about the side in the past year or so because much of his coaching staff are Penrith-aligned. Fittler, of course, is a Panthers legend himself.

He rejects the claim of favouritism.

“No, if anything, I’m harder against them,” he says. “If the Roosters [who Fittler also played for] were going well, I’d be more inclined to pick those players because they’re older, have more experience in bigger games, they’ve won premierships. I’ve got no bias anywhere. I don’t feel like I do. I’ve never thought of it that way at all.”

What Fittler is more concerned about is character, as he has said since taking on the job three years ago.

That’s why the Blues staff can’t possibly pick Broncos back-rower Tevita Pangai jnr, whose performance against the Storm hurt him more than his comments last year that he supports Queensland (which Fittler has previously fronted him about).

“If you talk about character all the time, if you bullshit about it, how couldn’t you pick someone like Jake Trbojevic?” Fittler asks. “He’s the type of bloke you want.”

There were two incidents in game three that Fittler never wants to see again.

“Coaching is winning and losing. We lost and I didn’t handle a lot of things well. The easiest thing is to bring it back to yourself, which I’ve done.”

The first came when Tedesco was knocked out, Queensland’s Jai Arrow picked him up believing he was pretending, and tossed him into the ground. Not a single Blues player rushed to their captain’s defence.

Later in the half, Cleary was trampled by Cameron Munster, then other Maroons players, and again not a single Blues forward leapt to their playmaker’s defence. Wighton eventually came flying in.

“In hindsight, the people who were in there close, could’ve stepped in,” Fittler says. “That’s your captain and halfback. They deserved better.”

Which brings us to ARL Commission chairman Peter V’landys’ foul play crackdown that’s divided the game. How do both NSW and Queensland balance signature Origin aggression with not being sin-binned?

Fittler believes wholeheartedly in the edict, even if it has seen Roosters Victor Radley and Angus Crichton suspended when both would’ve been picked.

The coach says the edict will be in the back of his mind when the pencil is replaced with a pen on Sunday night when the team is named.

“You have to pick players who aren’t a risk of being sin-binned or sent off,” he says. “If you feel there’s a risk, you can’t pick them.”

Does that mean he would’ve thought twice about selecting Radley?

“He would’ve been picked because, the last three years, he’s deserved it,” Fittler says. “He’s been the toughest and best lock forward for three years now. But the game has changed.”

To that end, perhaps the most important selections aren’t for NSW or Queensland but at League Central.

“The ref also has to get it right,” Fittler says. “I’m not denying the whole thing could be stuffed up. The player will have to take that responsibility. But some good refereeing can have us talking about the footy. We won’t be if they don’t pick the right referee.”