The biggest hole in the Waratahs roster this year is undoubtedly that of Wallabies captain Michael Hooper.

However, NSW assistant coach Chris Whitaker has thrown up a couple of left-field suggestions, including two Wallabies, who could wear the coveted sky blue No.7 jersey in 2021.

Could Jack Dempsey play at No.7 for the Waratahs in 2021? Credit:Getty

Hooper, still contracted to Australian rugby until 2023, is taking a sabbatical in Japan and won’t be available for the Waratahs this season.

The 29-year-old is back on Instagram after a long hiatus, posting a handful of videos and pictures from Japan, but that’s about all Hooper’s teammates at NSW will be seeing of him for the next few months as the team comes to grips with not having the national skipper in their ranks.

Halfback Jake Gordon has been appointed captain in Hooper’s absence but the more intriguing element to Hooper’s time away is who will occupy his No.7 spot.

With just over three weeks before the Waratahs face the Queensland Reds in round one of Super Rugby AU, there are a handful of options – some conventional and others more experimental.

As traditional No.7s, by way of having more of an on-ball presence, Carlo Tizzano and Charlie Gamble appear frontrunners for the role.

Tizzano, 20, has eight minutes of Super Rugby to his name but is tipped to have a bright future, while Gamble, a former Crusaders academy product who plays for Eastern Suburbs, is uncapped.

“It’s a good opportunity for Carlo and Charlie,” Whitaker said. “Both have trained really well. It’s another opportunity for other back-rowers though if you decide not to go with a traditional No.7.”

Which is where someone like 14-Test Wallaby Jack Dempsey comes in. Throughout his career, Dempsey has predominantly played No.6 and a bit at No.8 but used to play occasionally as an openside breakaway when he was younger. 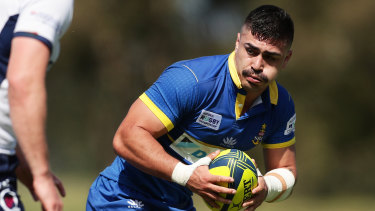 Charlie Gamble is also an option for the No.7 jersey this year. Credit:Getty Images

Whitaker said a shift to No.7 could be on the cards for Dempsey, or possibly even new Wallaby Lachie Swinton, youngster Will Harris or even Hugh Sinclair, depending on how the Waratahs want to play.

Out of position, sure, but Whitaker believes they can fill the void effectively.

For a player like Dempsey, who wasn’t included in any Wallabies squads last year, it could add another string to to his bow if he’s on the other side of the scrum in a slightly different role.

“We’re lucky in that we’ve got guys like Dempsey who can play No.7,” Whitaker said. “We’re lucky we’ve got two very good openside breakaways [in Tizzano and Gamble] but there are guys who can fill in if they want to. You’ve got the ability to switch and change how you want to play. 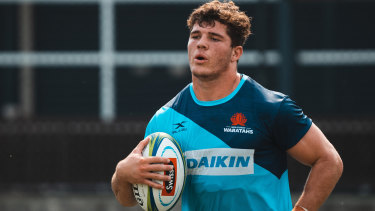 Carlo Tizzano has only played eight minutes of Super Rugby but is a highly rated youngster. Credit:NSW Rugby

“There will be an opportunity in a trial against Queensland in Narrabri (on February 5) so it’s up for grabs.”

Despite losing a number of high profile players, Whitaker doesn’t want to dwell on the past and is confident another young group can challenge for the title.

The Waratahs won just one of their six matches in Super Rugby before the competition was abandoned due to COVID-19.

In Super Rugby AU, the team chalked up four victories from eight starts and finished fourth out of five teams.

“This year we’ve got about 11 guys who made their debuts last year, so we’re expecting some exciting things from some of the players,” Whitaker said.

New recruit Izaia Perese, a Wallabies squad member for the spring tour of 2016 who then defected to rugby league, has impressed NSW coaching staff and will push for a start in round one.

“He’s been really good and adds a lot of excitement,” Whitaker said. “He is the type of guy who just loves playing footy and he gives us a lot of energy. Foot-wise, you can see why he got a taste of being in a Wallabies squad when he was very young. He’s a very talented player.

“He’s still learning the systems here and how we do things but I expect some positive things from him this year.”