For Hawthorn, Saturday afternoon may have primarily been about a farewell to Alastair Clarkson and Shaun Burgoyne, but there still was a match to be played.

The Hawks were determined to provide a fitting finale for their master coach, and a man nicknamed ‘Silk’, and had been well on their way to doing so but emotions were mixed after Richmond booted the final five goals, the last with two seconds remaining, to leave the teams tied at 83 points apiece at the MCG come the final siren. This was the first time the two clubs have featured in a draw together.

That the grand stadium was empty because of Melbourne’s COVID lockdown meant Clarkson, Burgoyne and Tigers defender David Astbury, also on his farewell lap, were denied a standing ovation, somewhat taking the shine off this historic moment, but the premiership memories of yesteryear will forever ensure an inner glow regardless of this dramatic finish.

The Hawks appeared to have this contest won at the 21-minute mark of the final term but the Tigers mounted a stunning surge. Jack Riewoldt closed the gap to a goal with a superb set shot from the boundary with 34 seconds remaining, and then conjured a goal off the ground from just outside the goal square, the ball crossing the line just ahead of a desperate Burgoyne lunge.

“I got there a couple of seconds too short – I apologised to the boys,” Burgoyne said.

On this day, the Hawks were arguably as far as they could get from their dynasty of 2013-15 but in ending his 17 years in charge with three wins and a draw, Clarkson has added even more intrigue to the leap of faith the Hawks have taken in replacing him with Sam Mitchell. 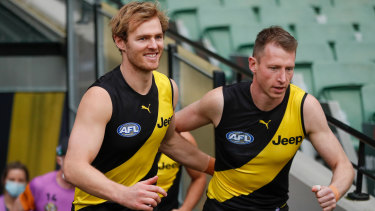 Richmond retiree and triple-premiership player David Astbury runs on to the field for his final game alongside great mate Dylan Grimes.Credit:AFL Photos

“We just fell asleep in the last five minutes of the game – it was a bit of anti-climax,” Clarkson said.

“I pass the baton to Mitch – a new chapter will be written in the Hawthorn footy club from this point.”

Tom Mitchell and Jaeger O’Meara were typically robust through the midfield, while Chad Wingard provided plenty of run. Tyler Brockman, still coming to terms with the demands of being a professional, booted three goals but Justin Koschitzke was subbed off with an AC joint issue. 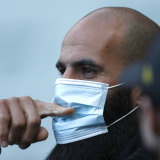 Burgoyne, in his 407th match, had 21 touches, beginning at half-back and finishing at full forward in the hope of one last goal. He also had several jumper changes, perhaps ensuring one each for his four children.

There was also coaching symmetry, for Clarkson, then a Port Adelaide assistant, had coaxed Damien Hardwick, then a Power premiership player, back to Melbourne in late 2004 to be his assistant when Clarkson became Hawthorn coach.

The pair remain great friends, and embraced pre-match. The Tigers troubled their opponents when they went quickly – Jack Ross and Jayden Short were busy all day – and five late goals, including two to Sydney Stack, ensured this contest won’t be forgotten quickly.

Clarkson was as motivated as ever. When the Tigers again broke through the Hawks’ zone defence in the opening term, leading to a Mabior Chol mark and goal, an incensed Clarkson made his feelings clear by phone to the bench. That frustration eased when Brockman conjured a goal off the ground minutes later, the term coming alive after an early defensive grind. 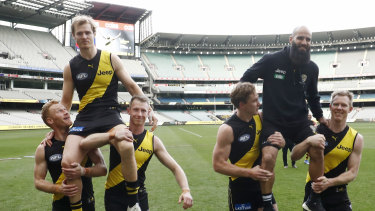 David Astbury and Bachar Houli were chaired from the ground.Credit:Getty Images

Hardwick said pre-match he was excited about the new look of his side, having made nine changes, six through injury. No Trent Cotchin, Toby Nankervis and Dion Prestia, not to mention Dustin Martin, ensured a new centre-bounce set up. Ross found plenty of the ball, and Will Martyn had his moments, while Liam Baker continued a stand-out season. But it was the Hawks, the No.1 ranked side for inside 50 pressure this season, who conjured four goals in the second term. O’Meara and Mitchell were busy, as the Hawks held a two-goal break at half-time. Irishman Conor Nash, having morphed into a midfielder/wingman, appears set for a prosperous 2022. After the main break, defender Nick Vlastuin continued to live dangerously, and a crude late hit on Oliver Hanrahan will be scrutinised.

Hardwick said Astbury and Bachar Houli could both have played on next year, but each understood the time was right to retire. When Astbury had what was a game-high 12 touches early in the second term, one wondered whether the right call had been made. Injury prevented Houli from taking to the field, but Astbury, in his 155th match, was able to take his customary spot in defence, on this day matching up on Ben McEvoy. 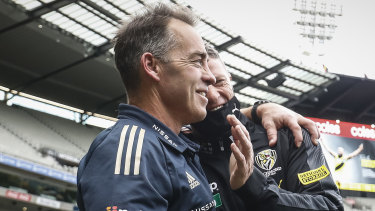 “I wouldn’t say it was difficult,” Hardwick said on the decisions reached by Astbury and Houli.

“Bachar, he has a great sense of gratitude and gratefulness and he understood where we were as a club. We wanted to make sure those boys got the opportunity to go out the right way.”