For Toby Greene, it should never have got to this.

The fact he’s had to wait until 24 hours before the Giants’ clash with Richmond to learn if he’s playing is ridiculous.

In many ways, Toby seems to encapsulate how many people in the footy world have viewed the Giants as an organisation.

With their draft concessions, academy and, often, their success, they’ve been a nuisance or an inconvenience; fiercely proud and talented, but largely unloved outside their four walls.

We know Toby plays on the edge. It’s what makes him great. But his tribunal history begs the question: is he judged more harshly than any other player?

I certainly think he is.

After the likes of Bayley Fritsch and Buddy Franklin avoided suspension earlier this year, it seems unfair that Greene has had to face another tribunal storm.

Those at league headquarters will argue every case is different.

Greene’s hit on Patrick Dangerfield meant the Geelong star couldn’t complete the game and was taken to hospital for observation.

In the case of Fritsch and “Buddy,” maybe the impact wasn’t quite as severe.

But what Greene’s case has done is again highlight the flaws in the current match review process and the tribunal that follows.

The system needs an overhaul.

It is as confusing as it is frustrating because you can have two almost identical actions punished in different ways because of the outcome.

Whether a player is suspended or not should be based on intent.

If we’re serious about protecting the head, it shouldn’t make any difference whether a player is concussed or bounces straight back up and plays out the game.

The “potential to cause serious injury” provision has not worked.

If the grading was weighted more heavily on what the player who infringes has intended to do, then I’m sure footy fans would be far more understanding.

Along with the holding the ball interpretation, the match review process is the biggest grey area of the game right now. 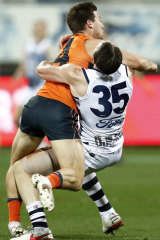 The fend-off in question: Toby Greene’s on Patrick Dangerfield.Credit:Getty Images

Still, Greene’s plight shouldn’t overshadow what has been an incredible coaching performance from Leon Cameron this year.

He sits comfortably alongside John Longmire in the coach of the year conversation.

Like the Swans, the Giants have been on the road for much of the season. They’ve endured the loss of a foundation star in Jeremy Cameron, and a tough injury toll.

Yes, the Giants and Cameron would have hoped they’d already be firmly entrenched in the finals picture, without needing to beat the Tigers.

But when you consider many believed this was a club on the decline, they’ve exceeded plenty of expectations.

The intensity and pressure they applied to Geelong was immense and the way they set up around the ball stifled a team rated among the favourites for the flag – all on the Cats’ home deck.

It once again proved how even the competition is this season – and I’m sure the unusual circumstances caused by COVID-19 have played their part – but take nothing away from what was one of the upsets of the year.

The Giants should also be buoyed by the re-signing of Josh Kelly.

A million dollars a season over eight years is a huge price to pay, but I believe Kelly’s commitment will be a worthwhile investment for a few reasons.

Aside from the fact he’s playing great footy, after the departure of Jeremy Cameron to the Cats, I don’t think this club could afford to lose another star.

If he’d left, there would have been concern of a far greater exodus, perhaps more on the scale of what we’ve seen at Gold Coast.

Kelly’s signature is a vote of confidence in Cameron as coach, the club and its future. It signals to other key players that it’s worth sticking around.

This club has enough potential to ensure it doesn’t need a rebuild. The Giants have experienced top-end talent and quality youngsters including Sam Taylor and Tom Green.

Of course, all of that will be put to the test against the Tigers, but what better stage to banish a few grand final demons.

You can never really wipe away the pain of a grand final defeat, but don’t underestimate the satisfaction they will get if they can end the Tigers’ season.

Who knows, it might just provide the spark to a finals campaign like we saw in 2019, when the Giants, under Cameron, were at their ruthless best.