“Three kids under three,” he says without hesitation while consoling young son Lou as his wife Chloe juggles six-month-old twins Olive and Delma in Sydney.

“It’s a very, very busy household. I’ve been playing footy for 12 years but this keeps you on your toes.”

So when Hickey lines up at the centre bounce to begin Friday night’s season-defining match for the fifth-placed Swans against fourth-placed Carlton in Melbourne, victory will only be part of his spoils.

He may also get a rare good night’s sleep.

“It’s pretty hectic, but it’s been good,” Hickey told the Herald and The Age. “They’re great. So not a whole heap of sleep. But they’re just starting to sort of hang out with each other and smile at each other and stuff now. So it’s been really nice.

“I sleep with our little boy and my wife sleeps with the girls. If they both wake up at the same time I go in and help. My wife’s a star, she’s an angel. She lies with the one that’s crying.”

Playing his second game back in the senior side after missing a month with a knee injury, Hickey will need to be wide awake against the rising Blues.

It’s all part of life’s journey for Hickey as the first AFL footballer to play for teams in four different states.

After stints with Gold Coast, St Kilda and West Coast Hickey, now 31, relaunched his career last year with an outstanding season which has made him a cult hero with some Swans fans. 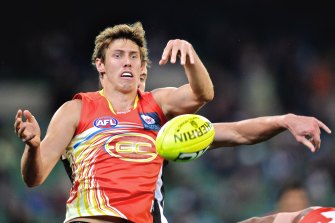 Tom Hickey playing for the first of his four AFL teams, the Gold Coast Suns, 10 years ago. Credit:Sebastian Costanzo

They’ve named him Sydney’s “Ruck Jesus” because of the long, shaggy hair, beard and piercing eyes standing out as part of an imposing 202cm frame.

Hickey laughs sheepishly at the description.

“I don’t know if that’s just because I look ridiculous?” he mused.“I’m a little bit superstitious. I played pretty well last year and didn’t want to cut my hair just in case, then had a stinker against Hawthorn, so cut it off a little bit.

“My kids love my hair. When I flick it in their face it makes them smile.

“I don’t think I’ve paid for a haircut for six years. I’d grow it and shave it but I’ve decided to keep it the last couple of years.”

While never one for biblical pronouncements, coach John Longmire is delighted with the contribution Hickey has made since his arrival, helping a rising but largely young and inexperienced squad.

“He’s fitted in really well from day one,” Longmire said. “Obviously he has experienced a few things over his time which he can share with other players.

“He thinks about his craft and has been a real addition to the club on and off field.”

Co-captain Callum Mills, who benefits from Hickey’s strong work at stoppages, is of a similar view. 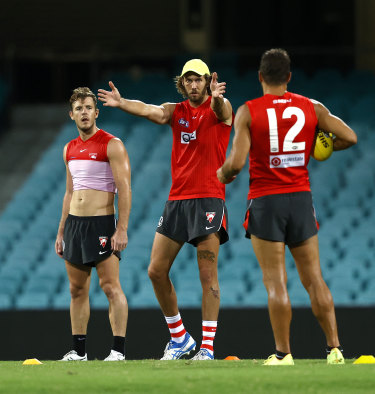 “As soon as Tom stepped into the club, he’s had a big impact on everyone straightaway,” Mills said. “He’s a great asset to have at our footy club.

“We love playing with him. He competes and tries to get it done as best as he can. And that’s all we ask. We really love having him around.

“He’s just a great fella and so laid back.”

For his part, Hickey believes this warm embrace has made him walk taller, if that’s possible when you stand over two metres.

“I was trying to show my worth, training hard and earn my spot,” Hickey said. “Once I got my spot, I felt really supported by the club and really trusted by the coaches and trusted by the players.

“I ended up playing better with that added responsibility. I’m just really, really enjoying my football.

“I don’t know if it was being around such a young group, a vibrant group, an exciting group that’s added a couple of years in these old legs, but I’ve just thrived on that responsibility of being the No.1 ruck.”

Related posts:
Previous Post: Nine tenths of the score: The stat Parramatta Eels live and die by
Next Post: Everton vs Crystal Palace prediction: How will Premier League fixture play out tonight?