This one could’ve been written for Broadway or the West End such was the dramatic tension, the heroism and the heartache. Two sides packed with talent but without a win in seven matches between them, the Chiefs and Highlanders took to the pitch in Hamilton determined and desperate in equal measure.

Despite the likely insignificance of the result on the overall standings, as a spectacle it makes sense to give the weekend’s final match top billing. 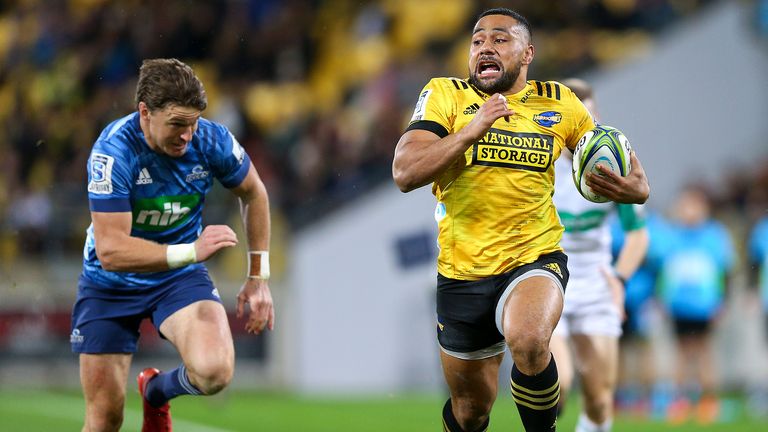 Warren Gatland’s home side, fresh off a bye, had identified their biggest shortcoming in the season to date: slow starts. With perfect Sunday afternoon conditions and opposing the one side within their reach on the log, there was no better time to test their theory and let rip from the off.

This they did in spectacular fashion with early tries to Lachlan Boshier and Anton Lienert-Brown, for a 14-point lead in as many minutes. Damien McKenzie’s trademark smile, usually restricted to his kicking routine, flashed freely. It really did feel like their day. 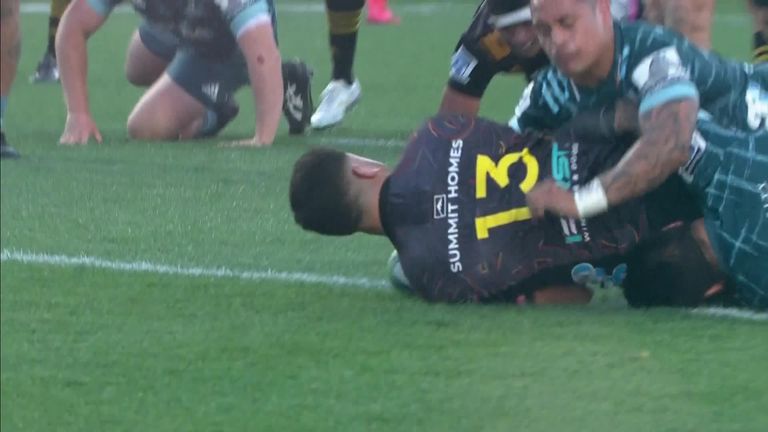 As if to rub in their dominance, the Chiefs – or ‘Mooloo Men’ of yesteryear, in homage to the farming region – showed their big cattle could cross as well, young hooker Bradley Slater scoring from the back of a rolling maul either side of half-time. 31-7 into the second half and it’s game, set, start the truck.

But of course a good start – even a great start – means little if you’ve forgotten how to finish. Gatland, through gritted post-match teeth admitted that if winning can become a habit, so too can losing.

You sense Aaron Smith, a man who’s experienced his fair share of both between his time with the Highlanders and the All Blacks, knew his side weren’t out of it.

This is a man who understands the science of the sport, and particular halfback play, and then makes it look like art. When you combine that skillset with an insatiably competitive streak, you have a man – and a team all around him – who don’t know when they’re beaten.

He was instrumental in three of the Highlanders’ four second-half tries – including a sensational score of his own – and still had enough breath to chip away at anyone who would listen.

It was all about his service for Mitchell Hunt’s try, half-field width off the top of the lineout and then short side deception from the base of the ruck that followed, and then it was all about speed for his own score 10 minutes later.

Collecting a pass at full stride off his bootlaces, Smith legged it for 40 metres, found a supporting runner in the knick of time, and stayed alert for the return pass. It came, he powered over from close range, and the Highlanders were humming, suddenly just two scores adrift. 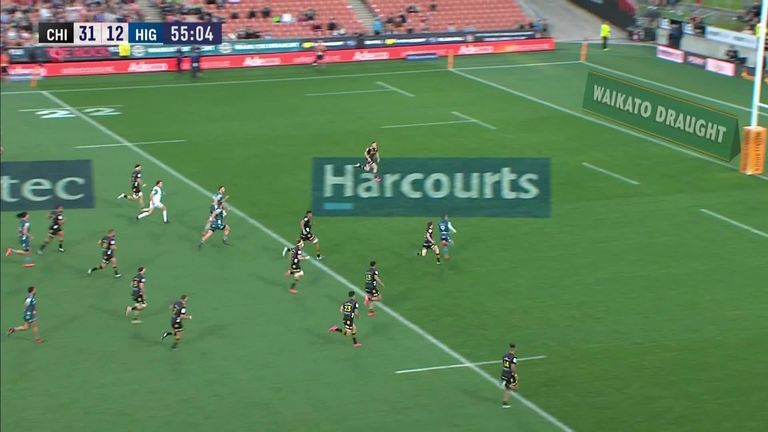 Another of the Highlanders’ explosive little guys, replacement Jona Nareki, landed the penultimate blow, but it was back to Smith for the final say.

With time up on the clock, the Chiefs in front by five, and the first half a distant memory, the Highlanders won a penalty that took them to an attacking lineout. It’s hard to ring a cowbell when you’re clawing at your eyeballs, so Waikato Stadium had fallen quiet.

Not Smith though. Barking at his pack as they lurched left and right, he picked his moment to go with absolute perfection. His short lateral dart drew the first defender as the second scanned wider out, before a flat pass found Patelesio Tomkinson for the simplest try, and ultimately the game.

The bloke belongs in a museum. 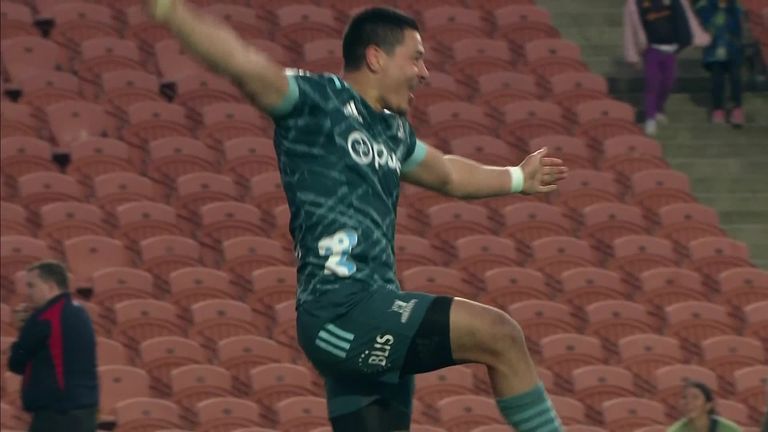 Of course at times like this we look for the reaction of those who had the most skin in the game, and for two teams under pressure that was undoubtedly the coaches. It’s funny how disbelief can look so different. Aaron Mauger and Tony Brown’s version looked a lot more fun than Gatland et al. The recently voted ‘Best Coach in the World’ – and the man who will lead the British and Irish Lions to South Africa next year – is now 0 from 5, a stat drawing attention from all corners of the rugby world.

You get the feeling this one really hurt, and he and captain Sam Cane should be commended for their post-match dignity in defeat. 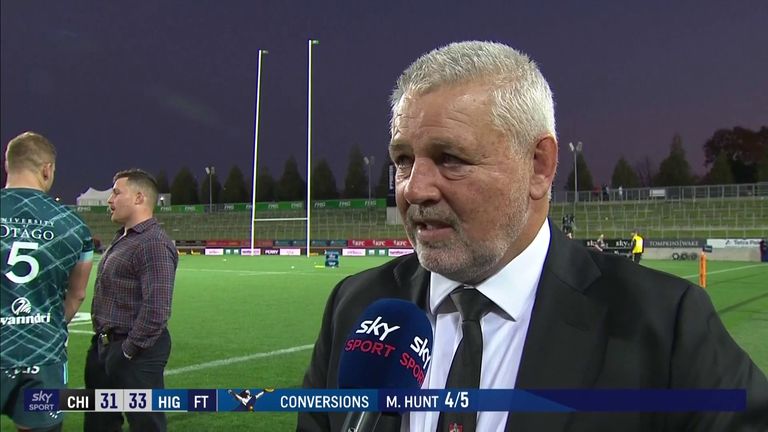 We step back in time, but not in intensity or intrigue, to Wellington on Saturday night, and the Blues’ attempt to keep pace with the table topping Crusaders who were sitting this weekend out.

It was the first time Jordie and Beauden Barrett had played opposite each other in Super Rugby, and the two 15s drew much of the pre-match attention.

Cameras followed their every move, and we even got a glimpse of Jordie’s playbook as strike moves and set calls were jotted down on the back of his wrist.

It was an interesting insight to the role of the modern-day fullback. Rarely in the past would they be expected to control the backline attack and call set plays, but such is his roaming remit that he (like his brother) appears as often at first receiver as at the back. Nothing was going to keep the brothers out of the game, but few would have foreseen Beauden’s first half the way it unfolded, least of all the man himself. Had we looked a little closer at Jordie’s handwritten notes pre-match, we might’ve seen ‘Give It To Ngani’.

Twice Laumape had the older brother in his sights, twice he left him grasping for air. First, and perhaps most astonishingly, he beat Beauden for pace. Rushing up to shut the door on a wide ‘Canes attack, Barrett was caught flat-footed and gave Laumape the outside arc. So far, so fair enough, but as the stocky inside-centre built to top speed it became clear the chasing superstar was making no ground and, after a futile dive, Barrett could only watch Otere Black’s sudden try-line transformation into a speedbump. Confident to his core, Barrett produced a delightful dummy to split the defence and score himself five minutes later, but his lesson in Laumape wasn’t done, and this time it wasn’t just his pride left hurting. Another fluent ‘Canes attack left 15 Blue alone with 12 Yellow in possession, and only one outcome. 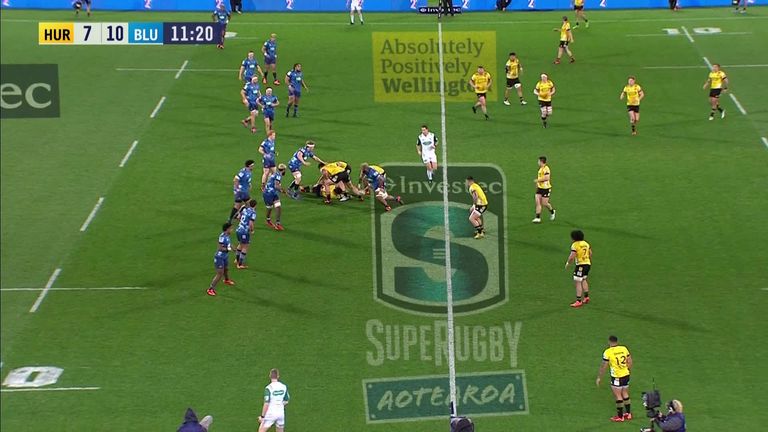 It’s hard to believe this whole sequence of events took place inside the first 15 minutes, but Laumape certainly looked like a man with a message. His post-match interview suggested retribution of some sort. Whoever the critics are Laumape was hoping to silence, Beauden would like a word. 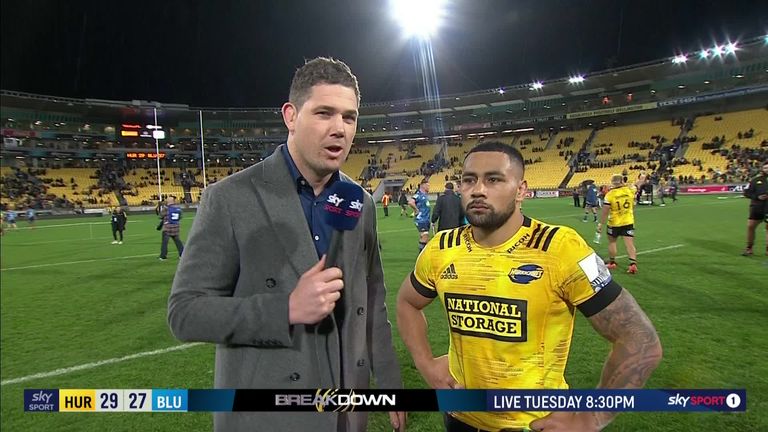 This Town Ain’t Big Enough For The Both Of Us

The rampage became more of a rumble as both sides traded driving maul tries, and the lead, over the course of the next hour. The Blues, brave but well beaten a week ago in Christchurch, knew the only realistic chance of claiming the Super Rugby Aotearoa title was to welcome the Crusaders to Eden Park in the final round within reach on the table – and that meant winning in Wellington.

With five minutes to go, and 27-22 up, it looked like a battered, bandaged and booed Beauden Barrett would have the last laugh.

But this one had a final twist, and from another Hurricanes driving maul and tangle of bodies emerged Asafo Aumua, a thoroughly deserving scorer, to set up the conversion clincher. Step forward Jordie, the new cult ‘Cane, for a nerveless and true wide-range strike. 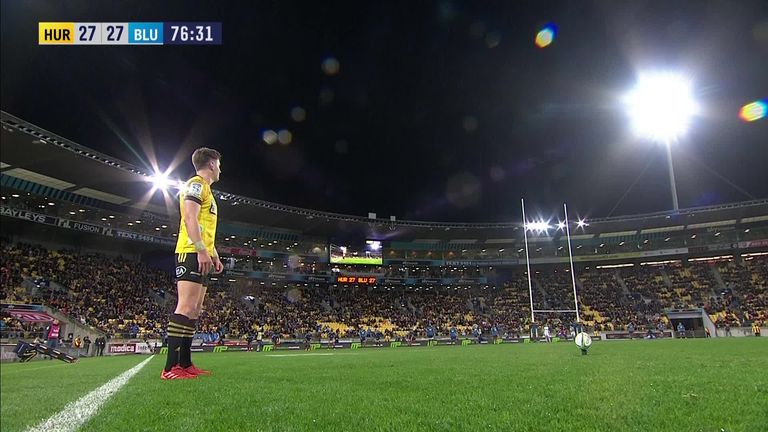 Three weeks into the Aussie incarnation of Super Rugby, and it feels like the teams are finding their groove now, with better execution of basic skills and understanding of the new law variations. The Force showed their enthusiastic intent a week ago but knew a trip to Suncorp would be a better test of their credentials.

And for the second week in a row, the visitors fashioned a fluid start. With Jono Lance at fly-half there is a lot of multi-phase movement, and a clear desire to use the full width of the field. If defences are a little slack, and the ball reaches its intended target in time, they can be handful. USA international centre Marcel Brache was rapid in the lead up to fullback Jack McGregor’s early try. 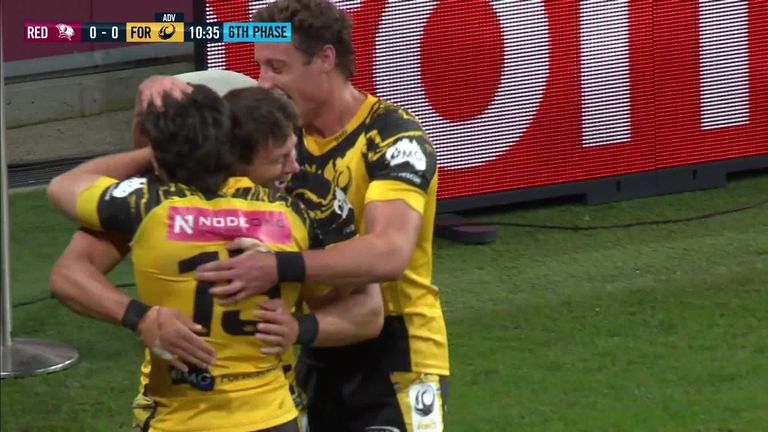 With coach Brad Thorn watching on with all the emotion of an Easter Island statue, the Reds shook of their rusty start to produce some good stuff of their own. Hunter Paisami weaved a lateral line before scrum half Tate McDermott found full-back Jock Campbell to race in and even things up. 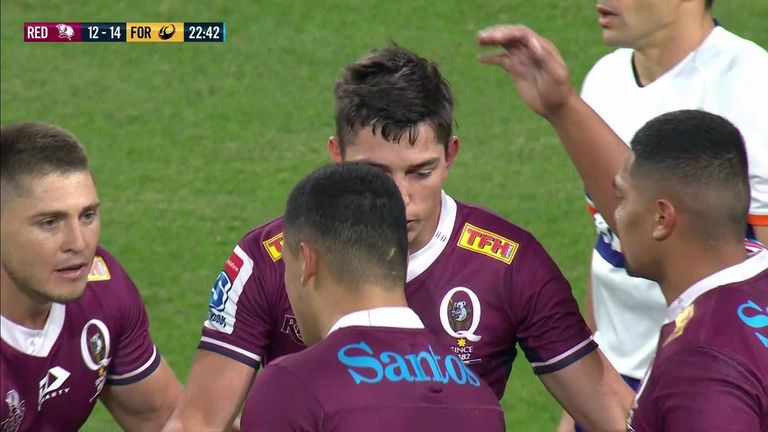 40 points in 40 minutes made for a keenly fought and entertaining spectacle, but as the Force find their way back in professional rugby, they need a few things to go their way.

Early in the second half an attack from deep in their own territory found Jack McGregor unmarked and wide open. It’s exactly the small opportunity that needs to be taken, if only to ease territorial pressure. The young fullback dropped it cold and the Force found themselves hard and deep on defence once again. The Reds scored not long after and just about stayed at arm’s length from then on. It was by no means the perfect performance, but as we consider Wallaby stocks, it’s clear each week that there are some individuals destined for a date with Dave Rennie.

James O’Connor looks at home at fly-half, a position not unfamiliar to him, but with maturity and consistency of selection there for club, could country come next?

And Taniela Tupou – Tongan Thor – was roaming the Suncorp pitch with a glint in his eye. If you were casting for the perfect modern-day prop, this guy is your man. 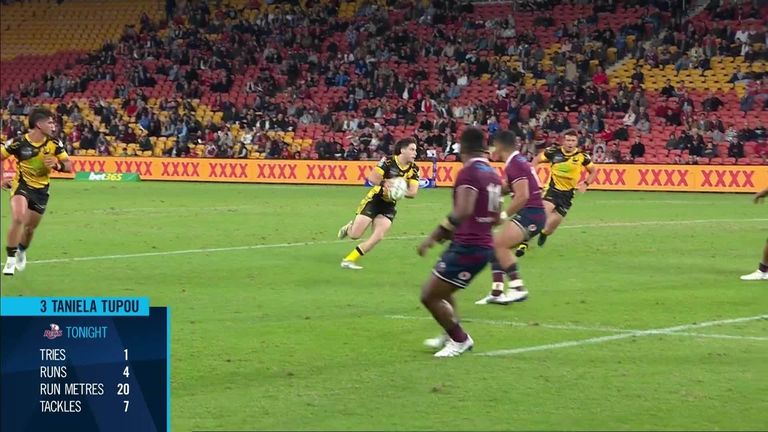 We’re running with the ‘incredibly tight finish’ theme this week, and this makes three of the four games decided in the final minutes. It’s a reminder of the joy and drama of live sport, especially for the tens of fans who were at Stadium Australia to witness this one live.

Not that it should worry the baby ‘Tahs too much. There are some bright futures in this group, and they’ll play in packed houses yet. Their quick thinking and lack of fear – not to mention skills – were on display when Joey Walton, Will Harrison and James Ramm (average age: a little over 20) combined to help the home side to a 15-point first half lead. Ramm’s patient wait and angled line for the bouncing ball showed class. 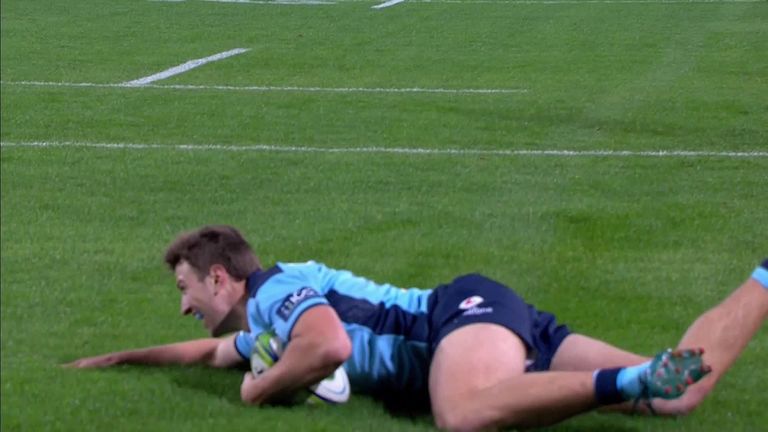 Will You Be My Valetini

Of course inexperience has its drawbacks, and not knowing how to manage a lead is surely one of them. That, and a quality Brumbies side who just took a while to get going. Hooker Folau Faingaa scored his sixth try in as many games (total metres made: 8), and when Rob Valetini crashed over before halftime, momentum had swung firmly for the Canberrans. 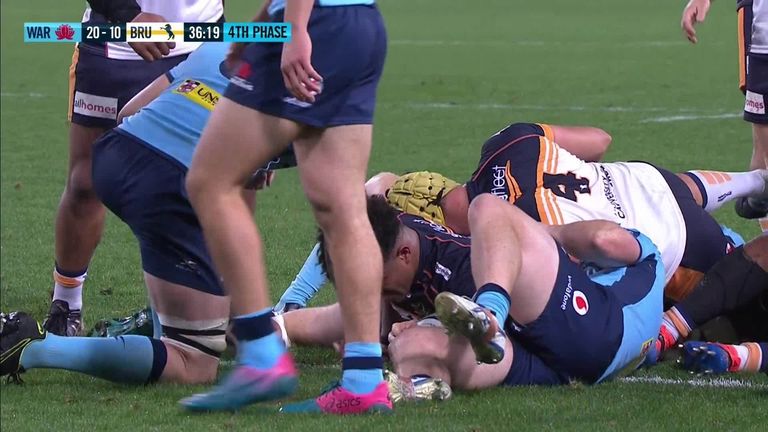