The Gold Coast have defeated a lacklustre Geelong in the final practice match of the pre-season, storming home after a horribly inaccurate second quarter to prevail by 23 points, 13.17 (95) to 11.6 (72).

The Suns were buoyed by an excellent second half by Ben Ainsworth, who kicked four goals, including three in the last quarter to seal the result. Jack Lukosius was also a spark up forward with three majors.

Tou Miller celebrates a goal for the Suns.Credit:Getty Images

Richmond recruit Mabior Chol went off late in the second quarter with a tight hamstring.

Geelong looked like they were saving themselves for round one, with Jeremy Cameron’s three goals one of the few highlights for fans.

THE NEW KIDS
Though hardly a new kid, veteran Suns defender Rory Thompson came on in the third quarter for his first run since 2018, to cheers from the crowd. Similarly, fans and coach Stuart Dew would be pleased by returning No.1 ruck Jarrod Witts, back from an ACL injury. The co-captain didn’t disappoint, moving well and offering good service to his midfielders. Academy prospect Alex Davies wasn’t as lively as in his previous outing against Port Adelaide. Geelong’s only first-year player was raw ruck prospect Shannon Neale, who came on late in the third quarter. Sam De Koning (one game in 2021) was busy; Max Holmes (four games) likewise. 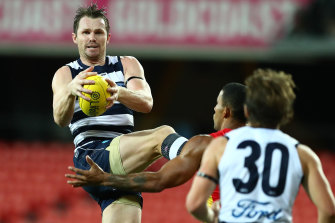 THE COACH’S BOX
Suns coach Stuart Dew has been looking to play a more direct and attacking brand of football, and his players obliged early before losing their way with dreadful kicking for goal – nine behinds in the third quarter – and occasionally directionless play. Still, they dominated the inside 50 count and shots on goal, so that’s a plus, if only they can finish. Losing Chol didn’t help. It’s harder to see genuine evidence of regeneration at the Cattery, either in style of play or playing personnel, the encouraging performances of De Koning and Holmes notwithstanding. In fairness, they were a long way from full strength. 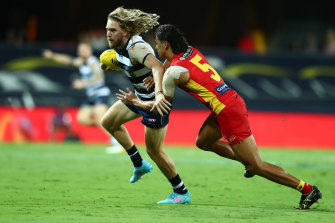 WHO STOOD OUT
Third-year gun Noah Anderson was the driver for the Suns, especially early. His game is now a beautifully balanced mix of inside and outside work. Lukosius sharked one goal and gave off another in the first quarter and showed why he’s been shifted forward by Dew. Ben Ainsworth’s late charge was especially encouraging for a burst player who’s struggled to run out games. For Geelong, De Koning was excellent and looks ready for more senior opportunities. Model of consistency Cam Guthrie was as solid as ever, and Cameron was a constant threat up forward with three goals. Patrick Dangerfield looked better as the match went on. 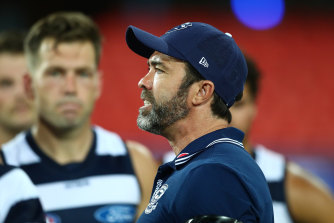 WHO’S MISSING
Geelong had a long list of outs, with defender Tom Stewart rested for personal reasons. Jack Henry has a foot injury; the Cats hope to have him fit for round one. Mitch Duncan sustained a minor calf strain. Gryan Miers has had ankle surgery while Sam Menegola and Jon Ceglar are returning from knee injuries, with the club cagey on their likely return dates. The reason for Gary Rohan’s absence remains a mystery. For the Gold Coast, Jeremy Sharp should be ready for round one after a hamstring injury, veteran forward Sam Day will need some more match fitness before he’s considered for senior selection, while Jack Bowes won’t return from a shoulder injury until mid-season. Ben King is out for the year.