Sydney's next generation were brought back to earth with a thud by Fremantle as the Dockers smothered the Swans' finals flame and kept their own flickering in a low-scoring affair.

After a week in which their cleanskin reputation was smeared by Elijah Taylor's quarantine breach, the Swans signed off on their hub life in Perth with a Saturday night stinker.

Rory Lobb is run down by Robbie Fox.Credit:Getty

In one of their poorest performances of the year, the Swans were comprehensively outplayed by the Dockers, who put behind last week's after-the-siren heartbreak to win by 31 points – 7.8 (50) to 2.7 (19).

The Swans' score was their lowest since relocating to Sydney and their worst since 1971 when they finished last of 12 with just three wins.

Dockers midfielder Josh Hill is likely to come under the scrutiny of the match review after making contact to Nick Blakey's head in a ground-ball contest. That Blakey played out the game and Hill was attempting to pick up the ball will go in the Docker's favour.

The loss leaves the Swans with a 4-8 win-loss record and needing to win their remaining five games to make the finals – but based on this effort, that is asking too much. 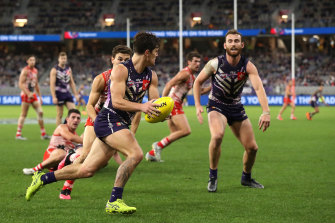 Lachie Shultz looks for an opening.Credit:Getty

Even if this year of recession is the one the Swans have to have as they invest heavily in youth, displays like this will do little for their confidence. The learning curve is steep.

The Buddy-less Swans were rendered impotent by a frugal Dockers side, which smothered their ball movement.

After kicking the first goal of the game four minutes into the opening term, the Swans had to wait until the 10-minute mark of the last quarter for their second. In between, the Dockers piled on six unanswered goals to clinch the four points.

Despite the lopsided scoreboard, the Swans had more entries inside forward 50 (34-43) but the quality of delivery left much to be desired.

This was not a good night to be Sam Reid or Tom McCartin. Even the great Lance Franklin would have had trouble imposing himself.

Fittingly, defender Luke Ryan, with 26 possessions, was awarded the Goodes-O'Loughlin Medal for the best player on the ground as the Swans could not find a way around him.

There was very little space for the Swans playmakers to run into. Nor were they helped by a midfield which was well beaten on the inside and outside – in contrast to last week against the uncompetitive Giants.

There was hardly a Swans onballer who could say he won his position. Josh Kennedy and Luke Parker both collected 17 possessions but had little impact on the game.

In defence, Dane Rampe's absence was keenly felt. Mitch Taberner was too strong for Lewis Melican, clunking nine marks, four of them contested, though his return of two goals did not reflect his control.

Robbie Fox conceded 21cm to Rory Lobb and performed admirably. It was not until late when the big man's height advantage was used to good effect.

After losing the first four games of the season, the Dockers are making decent strides under the tutelage of first-season coach Justin Longmuir.

Even if they defy the odds and make the finals, there is still plenty to like about what Longmuir's Dockers are doing.

Senior players Nat Fyfe and David Mundy remain important but the development of youngsters Andrew Brayshaw (26 possessions), Caleb Serong (20) and Adam Cerra will please those of the purple persuasion.